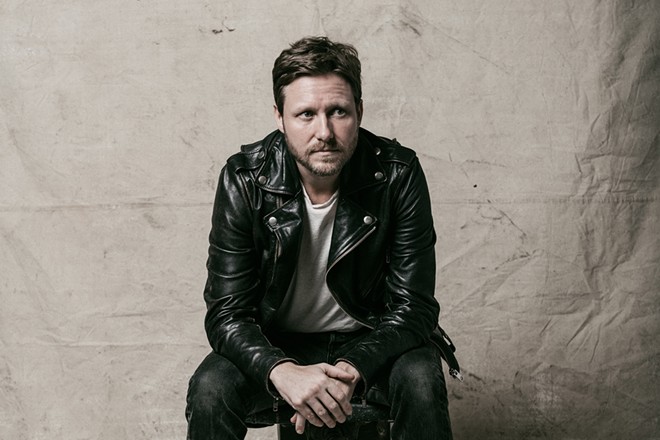 As someone who regularly saw 100-plus concerts a year pre-pandemic, I feel the following declarative statements carries some weight:

Cory Branan is my favorite singer-songwriter to see play live.

His approach to hammering an acoustic's six strings doesn't feel like anyone else's. There's a swift dexterity to his picking that's great, but it's when he gets off-kilter that he really shines. Branan treats his guitar like it's his longtime best friend who may have drunkenly said some cross words about his wife and now they're engaged in a bar brawl. He attacks his instrument, banging the body and pummeling the strings with atypical rhythmic tempos. Even in the calm moments, he'll bust out impromptu pace changes that stretch out the quiet moments, then seconds later scurry to make up for lost time.

And that's all before getting to the fact that he's one of the cleverest lyricists around. No singer-songwriter quite as effectively walks the line between sweet Southern charm and rebellious razor's-edge rabble-rouser. It's the reason I never miss a chance to see Branan live, whether it's in cow-skull adorned folky venues, dingy punk clubs, or even once in the corner of a hotel lobby at SXSW.

Since his songwriting has always stuck out from the pack, we chatted with Branan about the process behind some of his discography's standout songs.

Branan's most sharp-tongued protest song, "Another Nightmare in America" acts as a rallying cry against police violence by adapting the partial perspective of a racist officer. Despite being written years before George Floyd's murder, its bitter bile remains ever relevant.


"That's the whole thing," Branan says. "I wrote it after Ferguson, but it is, unfortunately, quite the evergreen subject in this country. I can't wait for it to be non-relevant.

"I was just spitting mad. But I know, as a white Southern male, this is not my story to tell, but this is my country and this is a shameful disgrace. And I still wanted to write about it. And so I went, 'I'll write it from the point of view of the racist killer cop.'"

It's a biting critique of the American dream in a similar "musical Trojan Horse with gutting lyrics hidden inside" mold to what Randy Newman did in the '70s with Sail Away, but with much more blunt force trauma.

"It's sort of a sonic experiment," Branan says. "I wanted to make it so catchy that you're tempted to sort of bop your head and not listen to the words. That's why I started without any music and I get that line in: "You uppity little ghost." And as soon as you hear that trigger word — uppity — there's no way to not listen to the lyrics."

The key is that the song slightly stretches beyond simply being the character's completely un-self-aware perspective to frame the acts he's committing as true horrors.

"Normally when I do character songs, I just completely go into that character," says Branan. "Growing up where I grew up in Mississippi, I know these just awful, awful mindsets. But it was a disgusting sort of thing, when I started doing it as a character study. And that's when I realized that I couldn't do it as a character fully. You can't put poetry in the mouth of a f—-ing bigot. They're not capable of it. They don't have the scope."

On a much lighter note, "The Prettiest Waitress in Memphis" was the tune that fully hooked me on Branan the first time I saw him live a decade ago. At first, it's a pretty straightforward melodic rock infatuation ode to a waitress, but then takes a surprise turn that I've seen make a crowd full of punks literally cheer.

"It's pretty much guy-meets-girl-in-a-bar," Branan says. "I find that if you work in a cliched format, it comes loaded with expectations. Like the movie Inception is just a heist flick, so they can do a-movie-in-a-movie-in-a-movie. Because you know all the shit in a heist flick; we gotta break in and get this... It comes already loaded with detail, so then you can screw with it."

Branan knows there's a magic to the song's turn, but also knows he can't tap that well too often.

"The whole thing — the pivot at the end — is all supported structurally by everything else, you know? Everything's leading up to her saying, 'This'll all change eventually.' 'Cuz every line is like, 'A small stack of singles from a hard double shift will do terrible things to a smile' or 'she's only gonna be that pretty for a while.' And I'm just setting up the punchline. She's like, 'I can only do this for so long before this f—-ing town or this f—-ing job eats away at me.' I think that's why people respond to the song, because it's like, oh, this is a fun little thing, but, oh, there's something real going on here. And then it has the payoff twist. You know it's a little big (cheesy voice), Ta da!

"I mean, you've got to be careful with those kinds of things because they can be a real novelty," he adds. "It can be like, 'Oh great, Bruce Willis is dead. I don't ever f—-ing need to see that movie again (Laughs)."

Branan sometimes introduces "Survivor Blues" as "my 'Born to Run,' except the guy and the girl in it both have pretty significant pasts, and they know that running won't do a damn bit of good."

The song rings with that classic Springsteen-ian rock energy, but with a scarred up rough-and-tumble core. But it's the clever lyricism packed with vivid imagery — scenes of smoke filled bars, stolen cars, and a bonfire of an ex's mementos — that make the tune transcend.

"I had the image of a guy and he was outside a bar, and he had T-R-U-E L-O-V-E tattooed on his knuckles, and he was just pounding his knuckles against the wall. (Laughs) It was this picture of him trying to pound his tattoos off.

"And so then I took it in the bar," he continues. "Again, we're working with the cliche: guy meets girl in a bar. And then you start to see that they don't really have this big, huge, 'Thunder Road' hope of we're gonna escape this."

While it's the prime example of Branan's songwriting subversion, "Survivor Blues" also resonates with him on a deeply personal level. Like most of his music, it's about pushing through the hard times without numbing yourself to reality.

"It's just playing on a cliché. 'What doesn't kill you makes you stronger,'" Branan says. "And I'm like, 'Well, it will also f—-ing make you wish you died.' It'll make you stronger... if you f—-ing live through it.

"But honestly, that's a lot of my music. It's kind of a thesis statement. (Laughs) It's just trying to keep from getting jaded while not, you know, becoming a dog fetching the same goddamn stick over and over and willfully dumbing yourself into doing the same bullshit again. It's trying to set little reminders for myself." ♦

The original print version of this article was headlined "Singing Subversions"