When the weather gets nasty and your mood sours, get yourself some soup 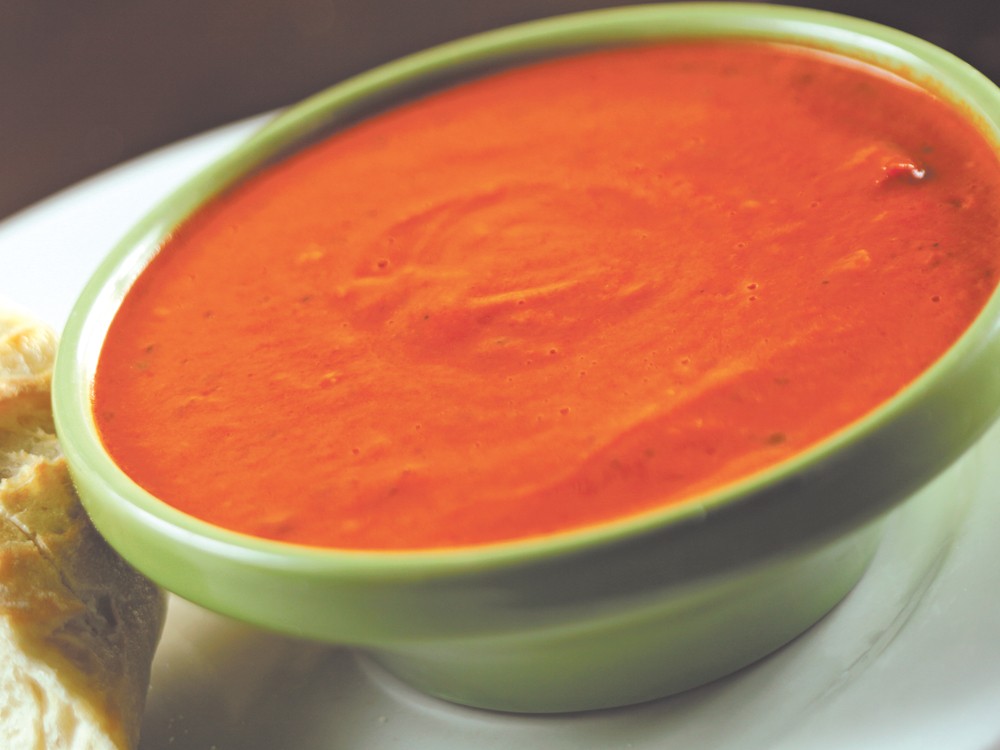 When it comes to cooking advice, I like to stray away from the Paula Deens and Guy Fieris and Emeril Lagasses of the world. But the big guy — Emeril, I mean — had a good point on the first episode of this season’s Top Chef. He challenged a group of chefs to a seemingly simple task: make some soup. Good soup, he said, is the sign of a great chef; bad soup is the sign of a confused chef.

I’ve been paying more attention to soup lately — not just because of Emeril, though. I find myself pleasantly surprised by soup again and again. For one, it’s cheap and filling. A bowl of soup at most places is cheaper than the rest of the menu. And, two, soup tends to be full of fresh, seasonal ingredients — right now you’ll see a lot of winter squash and pumpkin soups at local eateries. But, most notably, it seems to be a dish with which chefs can experiment and play. One bad soup probably won’t derail your restaurant, right?

For the last couple of weeks, The Inlander staff has been poking around Spokane for the best soup our lunch monies could buy. Here are some of our favorites. Take note — some of these soups aren’t always on the menu, so call ahead or check the restaurant’s Facebook page to see what’s on the menu. (LEAH SOTTILE) 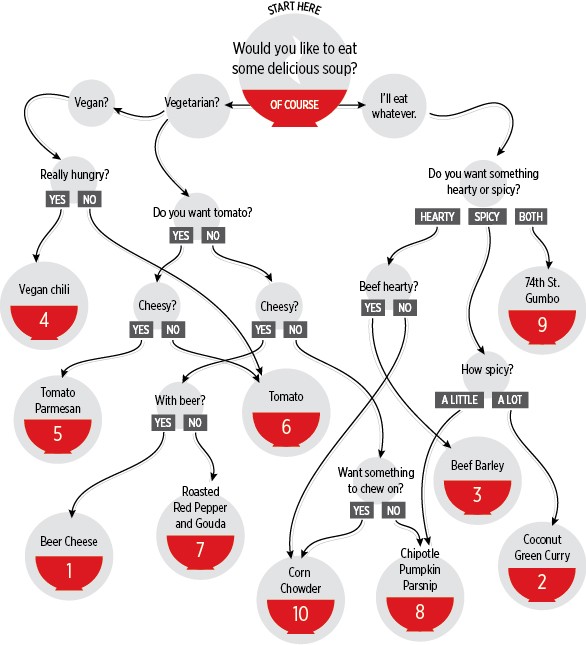 I mean, can you really go wrong when you combine two of the most delicious food items on the planet? Beer and cheese? They taste good apart, but together they’re a goddamn revelation. The soup isn’t the prettiest, but that doesn’t matter to your stomach. The malty flavors of beer elevate the cheddar cheese flavor in Soulful Soup’s Beer Cheese soup. And — because once we’re consuming beer it’s hard to stop us — we ate this soup with a slice of Soulful’s signature Beer Bread. Religious experiences were had. (LS)

This is spicy, hearty and something you’re not going to find at most places, which is why if your server or bartender at Manito Tap House tells you that they happen to have this as their soup du jour, order it. The coconut milk gives it a rich base and the rice noodles are an excellent touch. There are hints of garlic and other spices, making the pieces of chicken you’ll find swimming in this sea of deliciousness soft and delectable. And since you’re at a beer bar, they recommend you pair it with one of the lagers or pilsners they have on tap — perfect to mellow the spiciness. (MIKE BOOKEY)

Is your shivering soul lost in the existential snowdrift of the prospect of another frosty, ice-rotten winter? If so, I suggest Lindaman’s beef barley soup, which possesses just enough guts to warm yours. It has a fine blend of small chunks of meat and vegetables in a broth that’s not too thick, not too thin. And we’re not the only ones who agree. One reviewer on Tripadvisor.com who stopped into Lindaman’s a week ago wrote: “Stopped in for beef barley soup, salad, dessert, & coffee. Always a winner.” (JOE O’SULLIVAN)

As a vegetarian, there are some things I’ve just given up on, even when meat-free versions exist. Hot dogs, bacon, anything from a drive-through. And, until now, chili. Most often, meatless chilis are concoctions so spicy your mouth is numb before you can bother to taste what else is in them. But the experts behind the bar at Method have created a perfect middle ground for those of us who are always cold, but aren’t looking for that super-spicy kind of heat. It’s smokey and thick with a good kick. Loaded with black and kidney beans, tomatoes and bell peppers, and topped with fresh tomatoes and onions, it’ll fill you up fast. (HEIDI GROOVER)

To call Brooklyn Deli’s most popular soup merely a “tomato soup” would be like calling Michael Jordan “just a basketball player.” Brooklyn Deli owner Jody Harville says she sells five gallons of the soup every day. It’s the heavy cream and Parmesan cheese that makes it so thick, rich and delicious, she says, but that’s all she can say. “If I told you anything more, I’d have to kill you,” she deadpans. As someone who enjoys being alive, I didn’t push any further, finding myself satisfied with knowing that it’s delicious without knowing why it’s delicious. (MB)

There are tomato soups that are sugary and sweet, and then there are tomato soups — like the one at Stella’s Cafe — that taste like tomato. Weird, right? At Stella’s, chef Tony Brown makes his signature soup from fresh tomatoes, basil, garlic and fennel — nothing more. The orange soup is creamy with the perfect amount of acidity — giving it a fresh-from-the-garden flavor. If you simply love the flavor of real tomatoes, you’re gonna need to try this. (LS)

This humble soup is an ambassador. It builds bridges between the average Joes of the world, who may think it tastes like four-cheese pizza, and the elitist foodies who might call it a step above average tomato-based soups. The presentation is simple: soup, bread, butter. But the taste is superb. What starts as a subtle zing of red pepper quickly turns into the kind of soup that warms the soul, and finishes with an even gouda texture. (CHRISTIAN WILSON)

If pumpkin soup doesn’t strike you as elegant, then you haven’t been introduced to the right bowl. This is pumpkin at its most sophisticated — golden and silky, deceptively simple at first glance. Each spoonful rolls out sweet and rich, then ends with a subtle chipotle kick. (LISA WAANANEN)

The first bite of this thick, flavorful stew kicks you with a hot spice — but in a good way. Four or five spoonfuls in, the heat subsides and the complementing flavor of tender shredded chicken, rich flavorful sausage and shrimp shines through. This gumbo is served over a bed of rice, and there was definitely more stew than rice in the bowl after the contents were mixed together. (CHEY SCOTT)

When the temperatures take a nosedive, head to EJ’s Garden Bistro in Browne’s Addition to warm yourself up from the inside out. Once you’re there, settle down with as big a portion of corn chowder that the waitstaff will serve you. It’s a creamy, earthy chowder with chunks of potato, carrot and, of course, corn bobbing at the surface. Feel your eyes roll back in your head with pleasure. (LS)