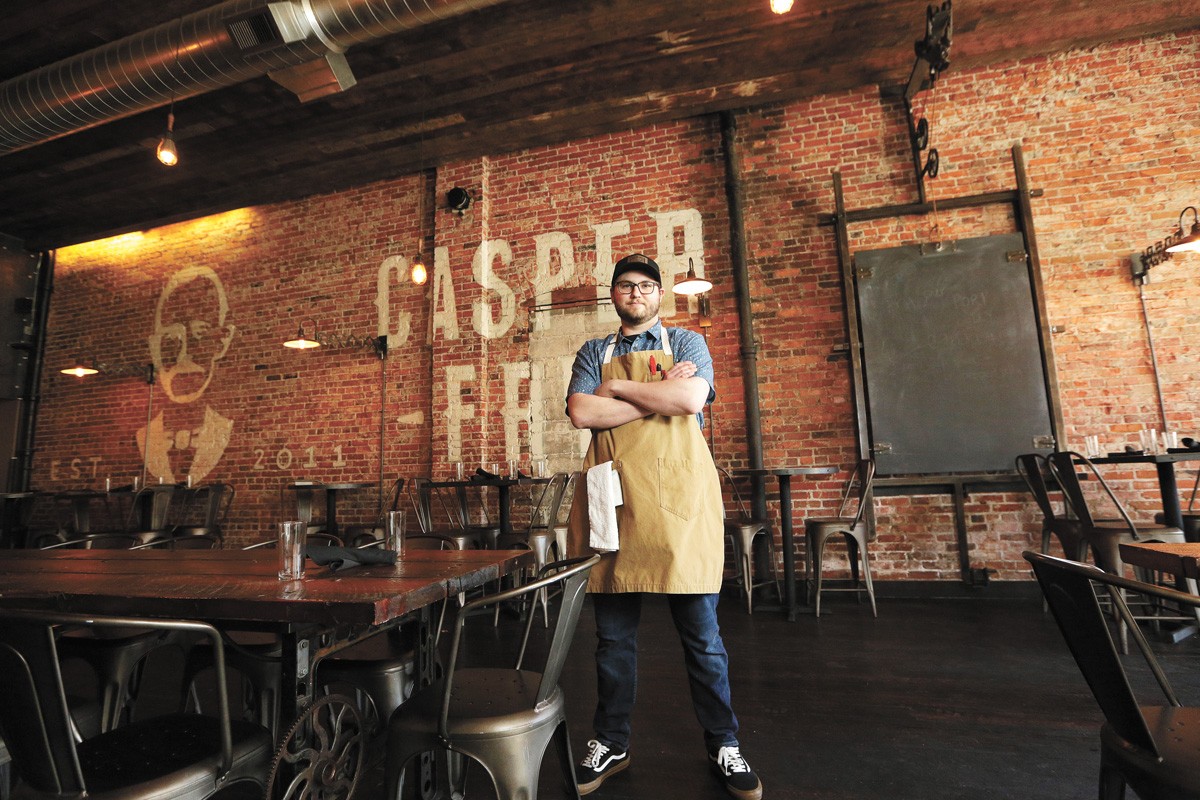 At one point this past year, Casper Fry restaurant in South Perry almost became another pandemic business casualty.

Its owners seriously debated closing for good while struggling to keep their other two restaurants, Durkin's Liquor Bar and Madeleine's Cafe, afloat amid ever-changing health regulations and decreased sales as COVID-19 cases peaked and slowed over the past year.

In early March, though, after being shuttered for just shy of a full year, the Southern food spot finally reopened its dining room.

There's a new chef at the helm, too, and a revamped menu that leans more toward casual fare than previous iterations of the restaurant, which often edged into fine dining territory.

"When we shut down in March, like everyone else, we didn't know if we would reopen or not," says Casper Fry co-owner Deb Green. She owns and runs the three restaurants alongside her son Ben Poffenroth and daughter Megan Van Stone.

"When we started to open the other restaurants at the end of [last] May, we'd had all this time as a family to think about what the future of Casper Fry was going to be. And when we got the staff back together, we basically said 'Look, we don't know what the future is, and we don't know if there is one,'" she continues. "That was the honest truth. We didn't want to hold them; they needed the opportunity to go out and find other employment."

With many of Casper Fry's former front- and back-of-house employees having moved on, the family brought on head chef Taylor Rainwater. He's spent the last several months reworking the menu to better fit the restaurant's new aim as a relaxed, neighborhood-friendly spot.

Rainwater's updates maintain a core collection of Southern-style comfort food: fried chicken, shrimp and grits, jambalaya, po' boy sandwiches and the like, each simplified and honed by the chef. He previously worked for the family, holding various kitchen positions at all three of their restaurants since moving to Spokane about five years ago. When the pandemic arrived, however, he moved back home to Arizona to support his dad.

"I think it was May last year, I called Deb just out of the blue and was like, 'Hey, we're going to come back to Washington, and I need work. I know we're in a pandemic, but is there anything you can give me?'" Rainwater recalls.

Green immediately said yes, and he found himself back in a familiar kitchen at Durkin's for the rest of the year as the downtown spot moved from takeout to limited seating capacity and back to takeout again.

When it came time to start working toward Casper Fry's return, Green says she knew Rainwater would be the one to lead its kitchen.

"Honestly he was the only choice," she says. "We watched him grow up in this industry. He is what we needed here, a chef that understood the branding and the concept and what the menu should be."

Since its debut in 2012, Casper Fry's approach to traditional Southern comfort food has taken many forms. But in a still-to-come post-pandemic world, Green says another big shift was due. Takeout continues to be a big driver of sales for many of her restaurants' customers and not everything on Casper Fry's former menu traveled well.

"We set out to make it less complicated and a little more approachable and to lower the price point some," she says.

"I think one thing that happened here is that every chef kind of put their own signature on the restaurant, and so over the years the menu morphed from the simple and less complicated Southern food that we started out with, and then it just honestly got a little too chichi for the neighborhood," she continues. "It made it more of a destination spot than, 'Let's hop over to Casper Fry for a burger and a beer.'"

The one-page menu starts with several shared plates: a pickle board ($10), chicken wings ($13), a biscuit trio — made at Madeleine's and topped with house ham, jam and creole-style mustard — and rotating gumbo ($6/$9), plus mac and cheese ($8) with the option to upgrade to pimento cheese ($9.50).

"The way I like to cook is with good ingredients, and very simply," Rainwater says. "I think a lot of times in the past, some dishes went over the top where there was a lot going on, whereas I like to make food taste good with what is seasonal and simple."

Among three salad choices currently is a classic: red beans and rice ($12) with fresh and roasted veggies and buttermilk blue cheese, topped with tahini dressing. Among Casper Fry's spring entree choices are a cold-smoked pork chop ($22), fried chicken ($18), shrimp and grits ($19) and jambalaya ($18). Dessert is beignets with caramel sauce or the cobbler/crisp of the day ($7 each).

"Like Taylor said, the food isn't complicated — it's not 35 ingredients to put one good dish on the plate — and a lot of these ingredients are utilized to their full potential," Green says.

In the bar, co-owner Ben Poffenroth has crafted a new collection of seasonal cocktails. Popular so far is the Strawberry Nights ($10), a concoction of vodka, aperitivo, lemon juice, strawberry honey, egg white and soda. All craft beers are $6/pint, or crack a domestic tall boy on the patio for $3.

Rainwater is also creating rotating, seasonal specials alongside a few cocktail specials from the bar. One of his April highlights is a Josper oven-seared salmon ($22) with andouille sausage, fava beans, a pepper hash, remoulade and poblano preserves.

Casper Fry's first weekend brunch pop-up of the year is Sunday, April 25, and again for Mother's Day, May 9. Both are reservation-only with seatings from 9 am to 2 pm. Otherwise, Casper Fry is open Tuesday through Thursday from 4-8 pm, and Friday and Saturday from 4-9 pm.

Even after almost leaving behind one of their restaurants, Green, her family and team are deeply grateful for the community's support throughout the past year's many trials. She now sees a light at the end, with vaccinations widely available and summer on the way. Still, enforcing mask policies, operating at 50 percent and continuing high-volume takeout orders remain day-to-day challenges.

"We're working harder now than we ever have," Green says. "It's harder to do this than your busiest Friday, Saturday night of the year. It's harder to be at half and manage it, and manage the guests and maximize what you're doing." ♦