The Beguiled revels in Gothic romanticism at the expense of substance 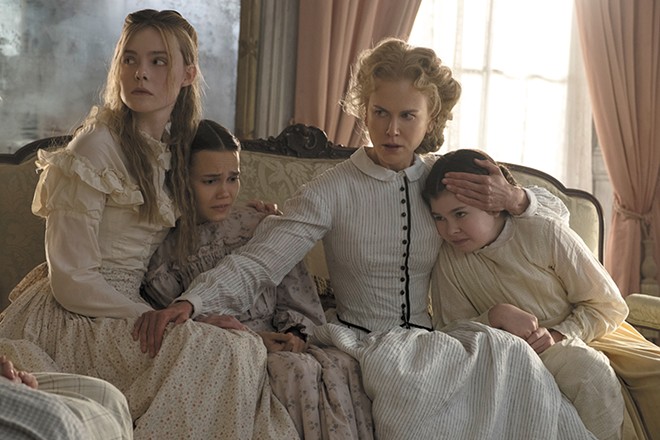 In Sofia Coppola's The Beguiled, the Southern belles are hardly prim and proper.

Unlike many of her stylist peers, her direction creates ever-present moods that hang over each shot, without the flashy bravado or quirky flair that can sometimes make others' films fall dangerously close to the realm of egotistical self-parody.

The Beguiled continues this path for Coppola, who won the Best Director award at Cannes for this film. Her adaptation of Thomas Cullinan's 1966 book, set in 1864 Virginia in the throes of the Civil War, smolders with a dark Southern languor and the visible humidity of a place where the roads are sheltered from the sun by dense canopies of oaks. Yet no matter how beautifully the proceedings are presented, a pulpy romance novel is still a pulpy romance novel.

The film centers on the all-girls boarding school run by Martha Farnsworth (Nicole Kidman), with aid from Edwina Dabney (Kirsten Dunst). It's their own little slice of wooded seclusion. Confederate troops occasionally pass by the property, but for the most part, the ladies are separated from men and the war in general. Anyone looking for a commentary on the era should look elsewhere: The Beguiled doesn't come anywhere near any discussion of politics or even a passing allusion to slavery. The lily-white school is isolated in every sense of the word.

Things get upended when one of the five students, Amy (Oona Laurence), comes upon an injured Union soldier named John McBurney (Colin Farrell) while she's out picking mushrooms. She decides to help him back to the school, where Miss Farnsworth, in the name of Christian charity, treats his wounded leg. As he recovers, Miss Farnsworth must determine what to do with this enemy in their midst as all the ladies grow increasingly fond of their visitor.

Coppola does an excellent job portraying the reserved but knowing romantic passes in ways that seem genuine — through casual looks, changes in attire, or the way that every female in the house gussies up for Mr. McBurney's first dinner outside of his room. Slowly and deliberately (perhaps a bit too much, as the pace sometimes crawls), things heat up to a Southern Gothic boiling point.

When that boiling point is reached, though, The Beguiled suddenly turns into a totally different film. The stakes are raised to the point of becoming a period-piece thriller. The shift is abrupt and relatively effective, but it comes so late in the film that it feels a bit too dramatic. (It should also be noted that the trailer for this movie is hot garbage that manages somehow to be both tonally misleading and too much of a spoiler.)

All the leads turn in strong performances, but even Coppola's lovely veneer can't disguise the story's genuine cheesiness. Her interpretation of Cullinan's novel, previously made into a 1971 film starring Clint Eastwood, smartly plays some of the prim sexual repression for a few laughs, but it's still a plot you'd expect to find in a paperback book with a shirtless hunk on the cover. It's also not really a feminist film, as the ladies basically let their little all-female colony come unraveled just because of one handsome and mildly cunning man.

The sheer talent assembled carries The Beguiled, but it also makes the whole package feel like a miss. ♦

The Beguiled is not showing in any theaters in the area.

Blinded by the Light is a cheesy, audience-pleasing ode to youth and Bruce Springsteen