Mr. Peabody & Sherman is an animated film, but it's sophisticated

He's the other bow tie-wearing time traveler, predating even the original 1960s incarnation of Doctor Who. Mr. Peabody and his son Sherman first appeared in the late 1950s on The Rocky and Bullwinkle Show. Now, their own feature-length cartoon is wonderfully, sweetly geeky, full of charm and authentic humor.

Peabody (the voice of Ty Burrell) is a genius inventor, scientist, musician, athlete, gourmand and mixologist. Oh, and he's a dog. I don't know if there's any explanation for how this is possible, and this new film never broaches it. But there is — in a move that represents how deeply nerdy a flick this is — a great deal of explanation of how a dog was allowed to adopt a boy; precedent-busting court cases were involved. We learn this because poor Sherman (the voice of Max Charles) has gotten into a fight at school with mean girl Penny (the voice of Ariel Winter), and now social services is involved.

What's so perfectly plausible that it requires no explanation? Time travel. Peabody's invention the WABAC (pronounced "way back") machine gets in the way during a dinnertime make-up get-together with Penny and her parents at Peabody and Sherman's house. Sherman and Penny take a quick jaunt, and that causes some disturbances in the time streams that Peabody must repair. So off the three of them go again, into the distant past...

Ancient Egypt and Renaissance Italy are but two of the places we are whisked away to, with much good-natured silliness and tons of gloriously bad puns along the way. These are the sorts of goofy yet intriguing adventures that could well inspire kiddie curiosity in history and art and science; I know this is just the sort of movie that would have sent 8-year-old me running happily to the library to find out more about the likes of King Tut and Leonardo da Vinci (whom we meet here in exaggerated, animated form).

But the marvelous script isn't only silly. Names including Gandhi's and Stephen Hawking's are dropped in clever ways, and the film even explores the concept of the uncanny valley (how we get weirded out by replicas of humanity, as in "realistic" CGI animation, that aren't quite perfect enough) without calling it such, in a running joke concerning da Vinci's invention of a mechanical child. There's sophisticated stuff happening here. ♦

Mr. Peabody & Sherman is not showing in any theaters in the area. 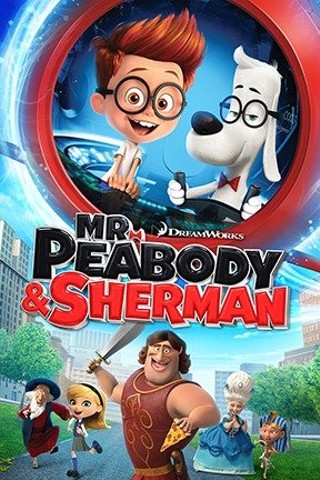