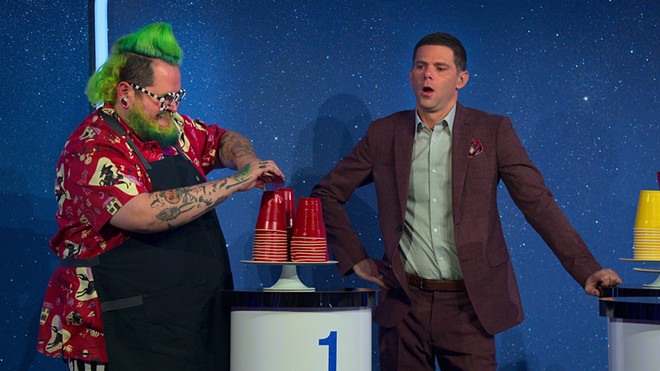 Is It Cake? offers food, fun and optical illustions, a stoned streamer's delight.

JOE PERA TALKS WITH YOU

Slow-paced, calm comedian Joe Pera plays Joe Pera, a self-described soft-handed choir teacher living in Michigan's Upper Peninsula. Over three seasons, the most recent of which aired this past fall and is streaming on Adult Swim, Pera's slice-of-life comedy has explored important topics such as breakfast food, shopping for groceries and finding a comfortable chair. Pera regularly breaks the fourth wall to, as the title would suggest, talk with you about them. Pera and company highlight the weight and value of everyday experiences in a way few other shows manage, and the result is one of the most genuinely sweet things on television. If you ever find yourself a little too stoned, consider letting Joe Pera talk you to sleep, which he attempts in the series' fifth episode.

SNL alumnus Bill Hader ditches his signature inability to get through lines without breaking for a much more subtle humor in this dark comedy. Hader plays the titular Barry, a Marine veteran-turned-hitman whose traumatic experiences have left him cold and numb. That is, until he unwittingly stumbles into a Los Angeles acting class taught by a self-important instructor played by Henry Winkler. It is through acting, and his classmates, that Barry begins to find connection, vulnerability and eventually intimacy. Though as he goes down this path of growth, he's unable to fully remove himself from his violent past life due to ties with a rather quirky, though brutal, arm of the Chechen mafia. Season three debuts April 24 on HBO.

Remember that recent trend in viral videos in which people would display something like a shoe or a clock, only to cut into it with a knife and reveal it was in fact an incredibly deceiving cake? Well, Netflix somehow made a whole 40-minute game show out of that concept. It's not The Great British Baking Show when it comes to quality, but it's great for those times you just need to mindlessly zone out for a bit.

ON CINEMA AT THE CINEMA

Comedians Tim Heidecker and Gregg Turkington, playing fictionalized versions of themselves, are two guys with a movie review show despite knowing nothing about movies. Over 10 years and 12 seasons, the theme of reviewing movies has remained central, though the expanded universe has spun off the rails to include leather-clad Italian rockers, family values, B-list legend Joe Estevez, alternative medicine and conspiracy theories that have come together to leave at least two-dozen people dead in their wake. The slow building comedy plays out over 10-episode seasons of roughly 10 minutes per episode, always coming to a climax by the season finale, making it perfect to consume over two hours on the couch. Everything through season 11 is available to stream for free on the Hei Network (heinetwork.tv), with the more recent content, including last fall's season 12, streaming behind a paywall.

If stoned paranoia isn't a problem for you, consider Station Eleven, which looks at an uncomfortably possible dystopia. Set two decades after a viral pandemic brings about the collapse of human civilization, the HBO Max miniseries tells the tale of a group of survivors, following multiple timelines and storylines, linked to one another by both their status as some of the few who made it through the pandemic and also by a hazy connection to a violent cult. The show ran from December through January, putting it firmly in the COVID era, though it is based upon a novel of the same name published six years before our real-life pandemic.♦