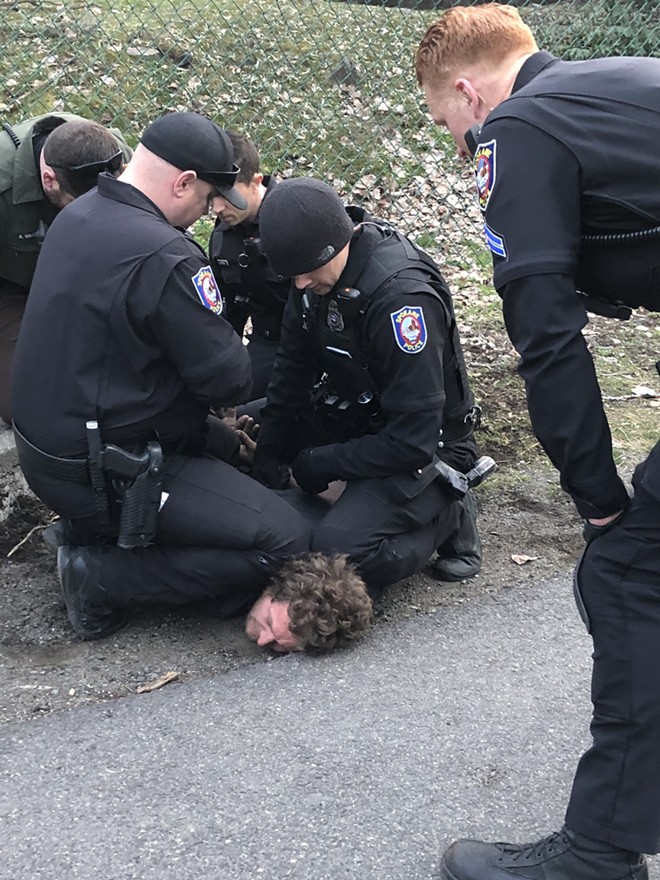 Eddie Westerman photo
A photo, taken by witness Eddie Westerman, shows a police officer's knee on a suspect's neck.
Normally, it can take months to get body-camera footage from the Spokane Police Department, as the request winds its way through a lengthy public records and redaction process.

On Thursday, the department released six recordings showing the arrest and showing that Officer Andrew Bjur had his knee on the neck of the homeless suspect, Corey West, for nearly a minute before removing it.


The videos can be seen at these links:


Last week, the Police Department suggested that the Minneapolis Police officer's placement of his knee on Floyd's neck was contrary to the way things were done in Spokane.

"The officer's knee on the neck — that's not how we train to place the knee," Police Chief Craig Meidl told the Inlander, also noting that once the handcuffs go on "everything changes."

In the Spokesman-Review, he stressed that a knee is sometimes briefly placed on the upper back below the neck.

But here, the body camera footage makes it clear that Bjur's knee comes down on the suspect's neck and remains there for a minute.

"Owwww!" West says as he's being handcuffed, elbows skinned up. "Why are you doing it like that? You could have been way more gentle. Please get off my head! Oww! What did I do to you, dammit?"
click to enlarge

Spokane Police Department body camera footage
Body camera footage shows an officer's knee coming down on a suspect's neck.
Bjur pivots around to the other side, but does not remove his knee from the area of West's neck. Even with handcuffs on, Bjur's knee stays there for 50 more seconds.

"You're fine," one of the officers says.

"You're still talking, you can breathe," another says.

"Effective immediately, our trainers will explicitly state in training that placing the knee on a subject’s neck and applying pressure is deadly and should never be done unless the situation clearly warrants the use of deadly force."

In the body camera footage, West can be heard breathing heavily — but it's not clear if it's because he's winded from the recent exertion or from the officer's pressure on his neck.

"You can breathe just fine," another officer says at the same time. "I'm not blocking anything."

But when Bjur finally removes his knee, West says, "Thanks." The officers then roll him over to his side.


"If we have individuals who are struggling to breathe, we will immediately roll them over on their side," Meidl told the Inlander last week. "That's the training based on their medical research. You don't even want their own body weight on their chest."

In the body camera footage, witness Eddie Westerman — who took the photos and published her account to Facebook this week — is seen briefly, but her recollection that she yelled at the officers that the suspect couldn't breathe isn't captured on the video.

Having rewatched the footage of the altercation, Westerman stands by her original assessment of the arrest.

"The cops used excessive force to take him down (which I understand since they didn't know the situation) but they continued to use excessive force long after they had him under full control and saw he was unarmed," Westerman writes in an email. "He also said 'I can't breathe' and they told him he could."

SPD spokeswoman Julie Humphreys notes that the footage should be viewed in context. Police officers were responding to a ranger's statement that he'd been fighting with the suspect, she says. (During the video after the arrest, the ranger actually tells police that the man did not fight with him, but was resisting.)

It turns out that the Spokane Police Department does train that it's OK to put pressure on the neck of a subject for a short period of time.


"SPD defensive tactics training has taught that it is acceptable to apply some pressure to the back of the neck of a subject for a brief period of time," Humphreys writes in an email response to questions from the Inlander. "It’s taught as a continuum of force, with one knee on the ground, and is a temporary restraint technique. The pressure used in this technique was never intended to be exhibited for an extended period of time."

In a recent post on their website, the Washington State Criminal Justice Training Commission said that they asked their trainers in control and defensive tactics whether they trained officers explicitly not to place their knee on the back of the subject's neck.


"The incredulous response from our trainers was, 'No, because it’s so obviously inappropriate and dangerous,'" the post reads.

But the commission changed that, stating that "we will no longer assume that students see what is obvious to trainers."

"Effective immediately, our trainers will explicitly state in training that placing the knee on a subject’s neck and applying pressure is deadly and should never be done unless the situation clearly warrants the use of deadly force," the commission continues.


Humphreys writes the commission's new guidelines state that "placing" the knee or shin across the neck for any length of time is not an approved arrest tactic — and that the Spokane Police Department would make changes as a result.

"Effective immediately within SPD defensive tactics training, the application of a knee or shin on the neck is considered an exceptional technique," Humphreys writes. "SPD is in the process of updating its defensive tactics manual and reviewing this technique as well as looking at the Minneapolis incident for lessons learned in an in-service training beginning next week."

An "exceptional technique," says Police Ombudsman Bart Logue, is a rare action that generally isn't taught and can only be justified under specific exceptional circumstances.

The speed with which the Spokane Police Department provided the body camera footage is a dramatic contrast from how long it took the department to release the footage of Officer Dan Lesser shoving a police dog through a car window to attack a surrendering suspect last year. City Council members first demanded to be able to see the footage of the video at the end of May of 2019 — only to be told that they would need to sign nondisclosure agreements and that department policy limited the release of video that was a part of an active investigation. The public only saw the video five months later, at the end of October. There's an ongoing IA investigation this time too. But this time? It only took a week.