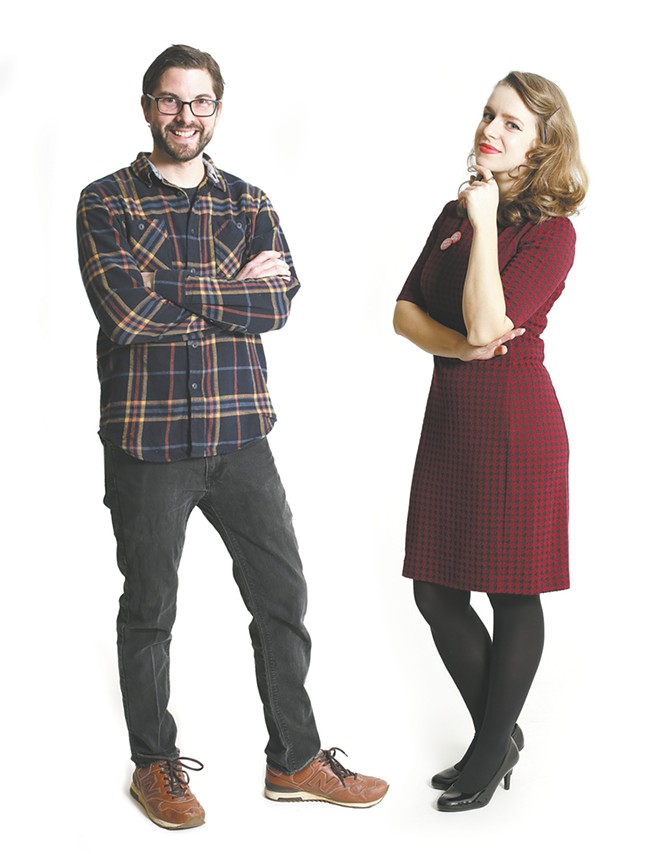 Young Kwak
SpIFF's current directors, Chase Ogden and Kendra Ann Sherrill, who have both been involved in the organization for six years.

It obviously doesn't take much effort to watch a movie: You're just sitting in the dark and staring at a screen for a couple hours. But for the folks behind the Spokane International Film Festival, it takes a whole lot of work to make your attendance a lot easier.

SpIFF's current directors are Chase Ogden and Kendra Ann Sherrill, who have both been involved with the organization for six years and have each seen the process from various angles — as interns, programmers and marketers. Now they're at the helm.

In the week before SpIFF's 21st opening night, Ogden and Sherrill sat down with the Inlander to give us some behind-the-scenes insights into the festival, and they detailed what it takes to pull off an event like SpIFF every year.

Programmers watch dozens of features and hundreds of shorts.

It starts with the movies: The programmers have a pool of about 40 feature-length films and nearly 200 short films, all of which have be watched by more than one programmer before they're considered for the schedule.

"We try to get at least two people on every film," Ogden says, "because we all have different tastes."

There's a fine art to curation.

The SpIFF schedule isn't put together at random. If you're showing two movies at once, for example, you want to pick titles with as little audience overlap as possible: With a children's film on one screen, a political documentary might be playing on the other.

"The way I've approached programming is to be as diverse as possible," Ogden says, "to have as many different voices as possible — different crew types, different genres, different countries — and making sure those work to create a whole program that has appeal but also cultural value."

He also points out that around 37 percent of the screened films were either directed or produced by women, the most female filmmakers SpIFF has had on a single program.

Everything is done by volunteers.

Both Sherrill and Ogden stress the heavy lifting done by volunteers, who do everything from distributing schedules and posters to spending hours looking at films, most of which never make it to the final schedule.

"This festival wouldn't be possible without all the support we get," Ogden says. "It truly is amazing how many people volunteer their time to make it possible, and it is an event I think Spokane should be proud of."

Here's what they're specifically looking forward to.

Sherrill points to the opening night festivities, which will feature back-to-back programs of regionally and locally made short films.

"We had so many really great Northwest films come to us, we decided to make two programs — the Best of the Northwest shorts, and a program of three mid-length films," Sherrill says. "One ticket gets you to the whole night and the party, and there's a break in between the screenings. It's supposed to be a nightlong experience."

"I think the opening gala is the premiere Spokane film event," Ogden says. "I've met equity investors that have helped fund films I've worked on, all the producers that I've worked with in the last six years came from meeting at a gala. As far as networking and talking to people about film, I always look forward to that."

Ogden also singles out the family-friendly animated film Big Bad Fox (Feb. 2 at 12:30 pm at the Magic Lantern), an anthology of fairy tale stories from the filmmakers behind the Oscar-nominated Ernest & Celestine.

"In the last six years, we haven't had a single film that would be appropriate for my children, so it was really important for me to find a film that my kids could come watch with me," he says. "I'm excited to take my 4-year-old to that."

Why it's important for Spokane to have a film festival.

Sure, Spokane isn't exactly Cannes, but SpIFF has become the go-to event for curious moviegoers to expand their horizons and have conversations with like-minded cinephiles.

"You're not a city with a decent cultural identity without a good film festival," Ogden says. "Film festivals are an opportunity to see things you wouldn't otherwise see. It's bringing the world to Spokane. It's curated for you, so there's a stamp of quality that you know you'll be getting, and I think that's valuable, as opposed to just browsing Netflix." ♦