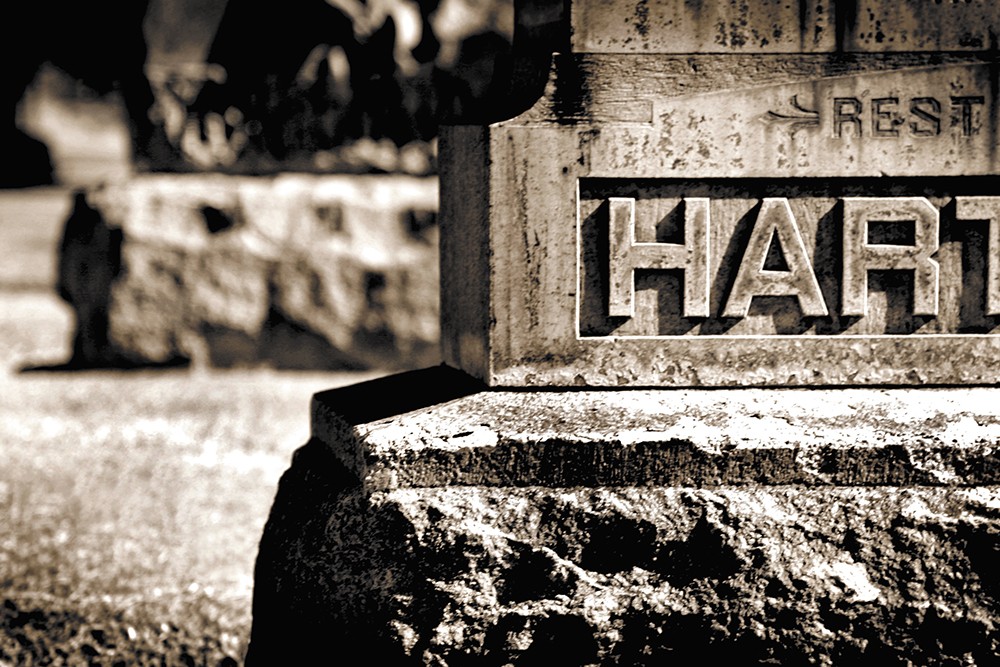 Fun fact: There actually is a pet cemetery on the Old Spiral Highway in Lewiston, Idaho. In this colorful, quirky tale, the author imagines the fallout when a human body is found there, buried in the dirt. This story, which intertwines two narratives about a pair of unrelated families, is about secrets, discovery and, most of all, life's unexpected turns. —DEANNA PAN

Tillie put on her work gloves, plucked the condom off the gravestone and swung it into the trees. It wasn't that she didn't like pets. Cleo and Scamp, and sweet Tig-tig—bless his little brain-damaged head, she still hadn't forgiven the damn vet—they were all over there under the willow. Everywhere else was so bare and windy. If people wanted to drive halfway up the old highway to find a shady resting place, why should she mind?

When they redid the garden, Stan brought down the old arbor and put it next to the path and that gave the grove a nice homey feeling, with the fence-wood markers and the painted stones. But those kids grew up all at once and decided to start squealing their tires and having sex and snorting glue and God knows what else. They got chased out of the Lewiston Mall, then East Fork Park, then everyone remembered the grove and their long-ago little friends, and came to do their dirty business under her trees. A wonder they made it back down, given all the beer cans and liquor bottles they left on the grass.

The Spiral Highway was scary enough sober, but the new four-lane bypass with its crazy maniac speed limits was no picnic either. There were—how many?—at least four emergency truck ramps, and they all had drawings of a giant out-of-control truck that would mash her Subaru into a pancake of metal and blood and Dylan's plastic toys. No escape but the emergency ramp where the gravel would stop her dead, leave her sideways in the path of the truck.

Gravel was a good idea. Have Stan call the Bolton Brothers, maybe next fall. Wouldn't take more than a couple loads. The little ones could find somewhere else to bury their pets, and the teenagers wouldn't think it was so nice to lie on sharp stones.

After Edith went into the home, Gramps moved in with us. He didn't eat much, just a sweet-faced bag of bones that shambled from bedroom to TV and back again. It made Sherrie happy to have him, and he really wasn't that much trouble. Sometimes I'd go sit with him and watch the news or a dumb comedy show. He'd just be there on the couch, all quiet, not seeming to get any of the jokes, which was probably better for him, given how much sex talk they get away with.

When he passed, he did that quietly too, just went into his room, closed his eyes and stopped breathing. Of course we wanted to do it right. I called De Franko's. Unbelievable. We'd have to sell the car and take a second mortgage on the house. Why should the living be punished by the dead? Gramps would not have wanted that. Not at all. And Gramps loved Baxter.

"You have completely lost your mind," Sherrie said.

"Think of Tyler. We could start a college fund, you know, in case his grades improve."

"I took it. At the lake. Big gobs of fur in the water after they went swimming."

"They'll be together again. In their eternal rest."

"You're right. Exactly right. But either way, we need to be smart."

The ground is hard up there, so we didn't go very deep. We put a marker by his head, with just his first name—Alan—in white paint inside a green heart. To make it fit in better, and stake out more ground, we put another marker at his feet that said Fluff, and over his middle we put a coffee can painted with the name Johnson, out of remembrance. "Gotta rearrange my Johnson," he'd say, and squiggle himself around, no matter who was watching. We printed half a page of words from the Internet and read them aloud. Sherrie started to cry until she saw Tyler pulling out the markers and putting them on different graves, and had to give him a slap.

Jerry stepped down from the grader, looked back at the pile. Weeds, beer cans, grave markers, a single pink tennis shoe. Leave the grader overnight, use it the next day for the gravel. Steve would be by any minute. A white ceramic plate stuck out of the pile. He pulled it free. Max, it said in black marker. RIP. He flipped it into the trees.

He turned toward the road and saw a piece of blue tarp. He used his boot to scrape away more dirt, found a steel grommet, lifted it with two fingers. The dirt slid off. A straggle of dry yellow moss, then an eyehole. He dropped the tarp, stumbled back, almost tripping over his own feet. He knew enough not to do anything else. He went back to the road, waited for Steve. Steve had a cell phone.

When Gramps retired from the mill, they gave him a watch, the old-fashioned kind you have to wind up. He'd wind it every morning, even though he had nothing to do and nowhere to go. Sherrie had knelt over him and wound it and put it on his wrist—sent it ticking into his grave. The engraving on the back, "Time to fish," led police to the mill, and those bastards led them straight to us.

"Poor guy hated the cold," I said. "Went down to Arizona, said he was going to lie by some pool. He sent us a postcard, do you want me to go look for it?"

The nice one—he didn't bust Tyler for the spray-paint even though the kid got it all over his hands—asked where Gramps got the money.

"These?" He pulled out a couple checks, then a printout of a four bank photos that showed me cashing them.

After my first year in, Sherrie stopped bringing Tyler for visits. Then she stopped coming too. The thing is, she was always oversensitive about being from a rural area, so all the talk added to her low self-esteem. It's not like I filled the yard with junk cars, but it still made her feel bad, the headlines, all the Internet jokes. So I understand. People need to maintain their own personal emotional security. I support that. But it still doesn't seem fair.

The city put Gramps in their own ground, up on the hill behind Home Depot. When I get out, I'll find Sherrie, take her there, show her everything turned out OK, no need to be upset anymore. I'm sure we can get past this.

The cigarettes had burned crispy black stars in the vinyl car seats the kids had hauled up to make their drugs and sex more comfortable. Stan should get the pickup, take them back to whatever junkyard they came from.

More kids than ever, what with all the stories about ghosts and a watch that kept ticking. More liquor bottles too, like they'd graduated from beer or needed something stronger to handle the fear. It was a little creepy now. The gravel crunched like old bones. The willow tree rustled and moaned even on still days, and there was always that dark place next to Tig-tig. But haunted? Silly. If that were true, that old guy's ghost would have to be surrounded by ghosts of cats and dogs and turtles and goldfish.

The breeze brushed her cheek and she gasped, then laughed. Oh sure, must have been the ghost of a goldfish. Swimming through the shadows, making kissy sounds with its haunted puckered lips. Next thing, she'd hear barking and meowing. Maybe a ghost turtle crawling through the leaves.

She held her breath and listened. Nothing. No ticking. Just the branches creaking. The air smelled dry and dusty, like cardboard, like when she was little and she'd stick her head into the dollhouse and check on Prince Carlos and Miss Molly and the two babies, who were actually trolls, but had nice hair and were the right size.

It was in August, just before school started, that she and Carol and Junie took Miss Molly out the third-floor window, feet first. Tillie wrapped Miss Molly in tissue paper. They made a procession to the yard. They put Miss Molly in one of Dad's ammo boxes, added another layer of tissue paper for padding and buried her under the elm tree.

The next spring, Tillie dug her up. She unwrapped her and washed her in the sink and shampooed her hair and brushed it out until it was pretty again. She buttoned on the little blue dress, and Miss Molly looked like new so she could go back home to her family.

And now? She couldn't have thrown her away, but must have, and Miss Molly was probably in the bottom of a landfill somewhere, along with her house and her prince and her blue-eyed troll babies. Why didn't she save them? Put them in her hope chest. Move them from city to city for the past six decades. She could have buried them here. The doll ghosts could play with the little animal ghosts, and they'd all make a better family for that poor old man.

Senility, she thought. I've finally lost my mind. She sat on a car seat, watched the silent road and tried not to hear the sound of traffic from across the ravine. ♦

Richard Harlan Miller is the author of the 2014 novel, "Gas Hat: Seduction and Dismay in Marin County," a stoner noir romp involving sex, drugs and blackmail amid the fringe-dwellers of a wealthy region of Northern California. After a 20-year career as a newspaper editor, Miller now works for Washington State University.