Watch out for the blue shell. 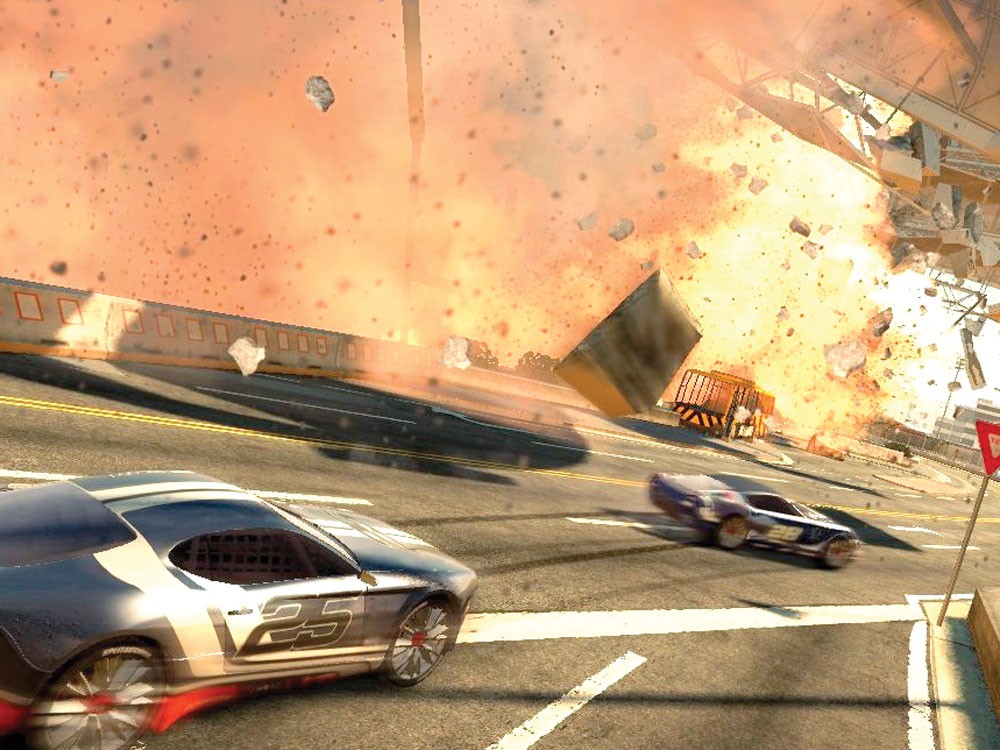 Every year, some trend in videogaming comes from behind and delivers an outstanding streak of games. In 2009, there was an abundance of beautiful fighting games: Street Fighter IV for arcade fans, Fight Night Round 4 for sports lovers, DISSIDIA Final Fantasy for franchise fighting, and the decent Tekken 6 at the end of the year. The year before that was all about outstanding PSP games. Now 2010 is turning out to be the year of outstanding racing games.

Every system has its own solid racing title. The Wii has the venerable Mario Kart Wii, but the PS3 is catching up with this year’s excellent kart fantasia, ModNation Racers. 2010 has also given the PS3 and 360 MotoGP 09/10 for serious bike racing simulation. Split/Second joins the group as an arcade-paced racing game with an abundance of combat and explosions. Crashing airplanes, capsizing ships — the stuff of Roland Emmerich and Michael Bay movies as seen from the inside of a racecar in less than five minutes.

Split/Second is a speedster racing game that has been recast with the racetracks as real-life extreme locations. So instead of a corner up ahead, it might be the sharp turn around the corner of an office building that can be blown up and brought down around rival racers’ heads during the final lap. Instead of slipping them on banana peels or blowing them up with missiles, I destroy my foes by triggering swipes from trackside machinery and remote-controlled helicopter detonations.

Much of this mayhem makes Split/Second feel like SSX with its inside-the-pinball perspective of a fixed track with interactive scenery. All of racing’s drifting and drafting add up to “Power Plays” in Split/ Second, setting off the game’s spectacular explosions and wrecks. Instead of out-racing my opponents, I’m plotting to blow them up and take their positions at the head of the track.

I climb the ladder through the game, unlocking new roller-coaster levels and encountering elaborate action sequences. I keep my instinctive racing skill focused on my steering as I sweep and coast through the labyrinthine racetracks. But I’m aware that the easiest way to go from fourth place to first is to blow someone up. Preferably a few someones. So I prudently save up for “Power Plays,” racing’s most blow-itup-ish way to blow the competition away.

THE GOOD: The tangled cityscapes and industrial landscapes of Split/Second are spectacularly imagined and nicely rendered, with chaoscausing accessories seamlessly blended into the atmospheric backdrops.

With shiny, faux-foreign cars and Hollywood-grade action sequences, this is candy for the home arcade.

THE BAD: I’m glad I didn’t let Split/Second slide into the stack of games I didn’t play. I know that this is Disney’s first foray into something serious and sportsy, but they could have done a better job with the offline scoreboards, player rankings and time records. Take a clue from Nintendo, which can build a party game out of any form of digital interactivity — the home arcade is a valuable market. Still, Split/Second is a perfect party, summer-pad game to have around.