Re-casting the popular British melodrama in the Inland Northwest 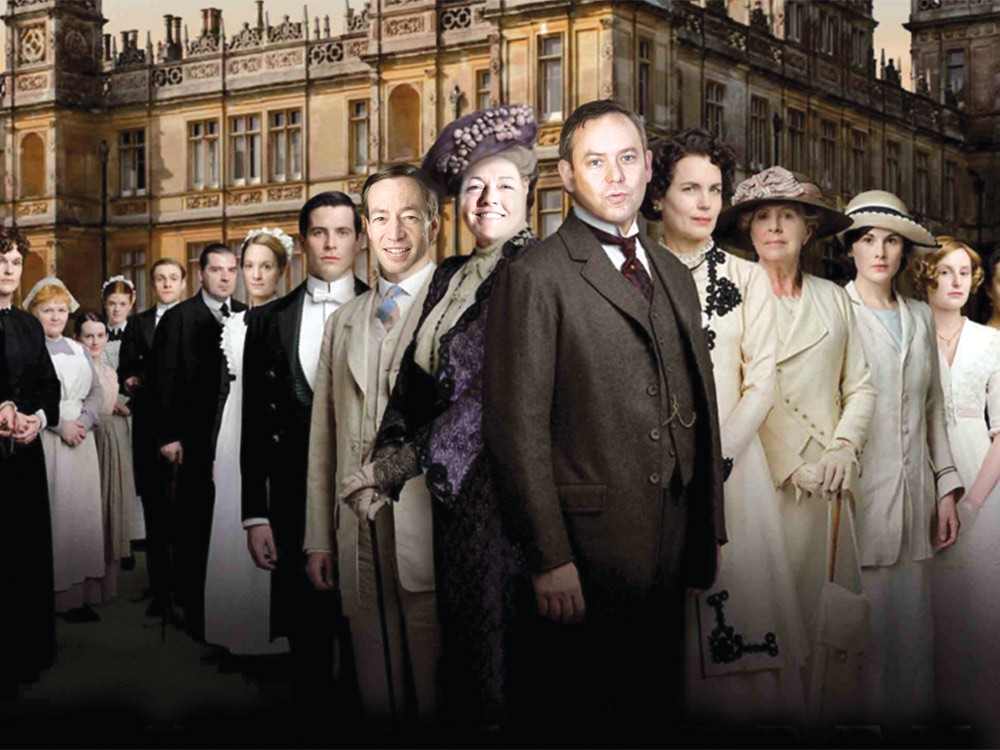 Alissia Blackwood photo illustration
Bates the Valet, (eighth from the left) with some of the Spokane cast.

Downton Abbey has done the nearly impossible by persuading people who aren’t your shut-in neighbors to watch PBS. Exploring class issues between the aristocracy and the downstairs “help,” between righteous Lord Grantham and his proud valet Bates, it makes a daytime soap opera look timid in its melodrama.

And it got us thinking: What if the show was about the Spokane elite and the regular working Joes?

We enter the Davenport, where a shocking incident has just been discovered.

Lord Cowles, the Earl of Davenport: Bates, did you see the newspaper today? There’s been an enormous disaster that I fear will change the course of our lives and history.

Bates, the valet: Jesus, what is it? Lord Cowles: Jefferson Elementary might move across the street from me, when it was formerly half a block from me.

Bates: Oh, that sounds . . . wait, what? Lord Cowles: It’s hard times in Spokane, Bates, when a fully functioning and high-performing school might have to get a new building in a slightly different location.

Bates: . . . Hillyard. Lord Cowles: Of course. You see, Hillyard has different — shall we say — ideas of how the world works compared to the South Hill. On the South Hill, schools must stay firmly in their place. Because otherwise, schools might get all uppity, causing traffic congestion when I drive my Land Rover to Trader Joe’s. Have you ever been to Trader Joe’s, Bates?

Bates: I went once with my cousin in Seattle. It was OK. I thought the hot dogs were overpriced.

Lord Cowles: Bates, forgive me for being frank, but you don’t know from hot dogs. You were no doubt looking at steamed spinach and tofu alder-smoked dogs, which is a Turkish treat not generally seen on this continent. The point is, although we live in the same city, we have very different lifestyles, don’t we, Bates? What activity in this city gets your heart pumping?

Bates: Arena football. Lord Cowles: Christ. Bates: Really, though, what’s the harm in having an elementary school closer to you? Don’t people generally want that?

Lord Cowles: Why, so they can use the playgrounds on days their children are home because of a Catholic holiday at Cataldo?

Bates: The kids can walk to school? It’s safer? That kind of thing?

Lord Cowles: Safe! I hardly think we need to worry much about safety in our community. It’s not like there’s that many poor people holding soda bottles to worry about.

Lord Cowles: Think of appearances, Mary! Really, you should have stuck with the $100,000 so you could look like a common citizen. Like Bates.

Lady Mary: So I can’t ask for that money? As a little treat for dealing with the Spokane Police?

Lord Cowles: Well, we wouldn’t want you to seem hypocritical or unethical. Think of what we did to the last guy we accused of that.

Enter Sir Condon, rightful heir to the Earl of Davenport.

Sir Condon: Hey, suckers. Lord Cowles: Hi buddy! Sir Condon: Whatever. Lady Mary: Why do you get the title of the place again? You’ve done nothing to deserve it.

Sir Condon: Nope, not really. Honestly, I don’t think I’ve even presented an idea to the public yet. I’m assuming I just got the title because people think I’m kind of attractive in a doughy way, and my wife’s clothes are cute.

Lady Mary: So unfair. Just one little scandal that ends up with a man hog-tied and tased to death, and I never hear the end of it.

Lord Cowles: Bates, where are you going? Don’t you know BeGin begins in a half hour?

A Spokane native, Kate Kershner is a freelance writer living in Seattle. Her work appears on the Discovery Channel networks, HistoryLink.org and McSweeney’s.

A Spokane native, Kate Kershner is a freelance writer living in Seattle. Her work appears on the Discovery Channel networks, HistoryLink.org and McSweeney’s.