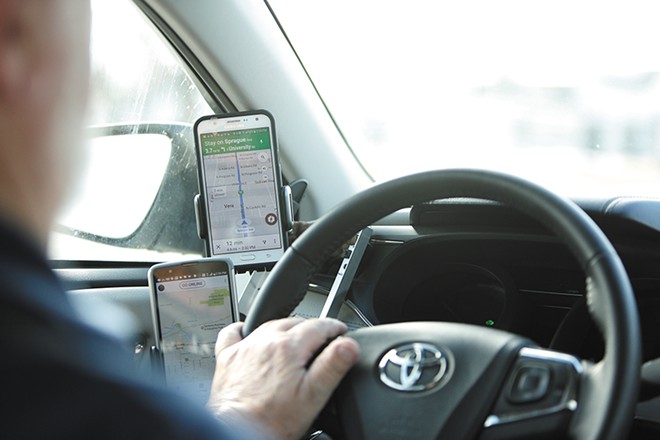 Young Kwak
Services like Uber and Lyft have rapidly outpaced taxi services — but the impact on their drivers is a little more complicated.

SPORTS: Josh Perkins, point guard for the Gonzaga basketball team, has had a rocky athletic career at the university so far, ranging from being benched due to a broken jaw, to driving under the influence. (Members of the media were also pessimistic about his prospects.) But he's still a helluva point guard and leads the nation in total assists. Will Maupin has more.

NEWS: Asylum claims from immigrants who entered the United States illegally or turned themselves in at official points of entry have spiked in 2018, despite efforts by the Trump administration to crackdown on refugees. Nearly 60 percent of all people asking for asylum in 2018 were people in families. (New York Times news service)

Trump still has no chief of staff
Following the announcement that John F. Kelly would be stepping down as his chief of staff, President Trump's ideal person to fill the position, Nick Ayers, Vice President Mike Pence's current chief of staff, indicated that he won't be taking the job. And Trump doesn't  have a long list of candidates who are eager to try and bring order to a White House that the Washington Post reporters describe as a "den of disorder ruled by an impulsive president." (Washington Post)

McConnell: Criminal justice reform bill will get a vote
A high-profile bill that would make sizable reforms to the federal criminal justice system will get a vote in the Senate before the end of the year, according to Senate Majority Leader Mitch McConnell. (Previously, McConnell had indicated that there wasn't enough time left in the year to push the bill through.) The legislation, known as the First Step Act, would make substantial investments in anti-recidivism programs and loosen federal mandatory minimum sentencing laws with early release credits. It has rare bipartisan support, as well as President Trump's backing. (New York Times)

Get in line, Uber and Lyft
Last night, the Spokane City Council unanimously approved new regulations for ride-sharing companies like Uber and Lyft. Specifically, the new ordinance requires that ride-share drivers must undergo background checks, have their vehicles inspected, and pay a surcharge of 10 cents per ride. (Spokesman-Review)

More taxes coming to a ballot near you
Voters will get to weigh in on whether to increase property taxes to raise $5.8 million to fund 20 firefighters, 30 police officers and criminal justice programs. City officials estimate that the tax increase on a $200,000 home will be around $60. And following approval from the Spokane City Council last night, the measure will appear on the February 2019 ballot. (Spokesman-Review)