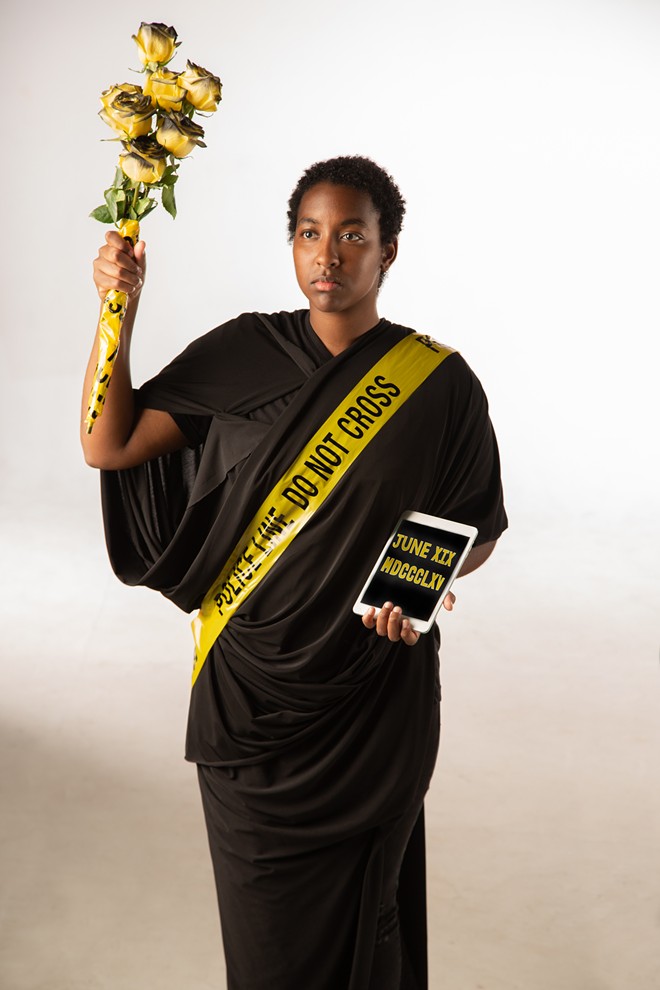 Grace June photo
Bethany Montgomery as the Statue of Liberty

Grace June remembers exactly the first time she met Bethany Montgomery, the Power 2 The Poetry co-founder who is one of the featured models in June's powerful new racial justice photo collection, We Hear You.

"I heard Bethany perform for the first time and talk about Black Lives Matter," June says. "At Richmond Art Collective, she just started in the middle of a crowd, saying this poem. And I was like, 'Oh!' I think I went up immediately and hugged her. I was really moved.

"It just made me start asking questions, and I feel like the best thing art can do is help people ask questions."

With We Hear You, June combines models posing as iconic figures like the Statue of Liberty or Lady Justice with strategically placed police tape, a concept she came up with in the wake of the George Floyd murder.

"I wanted to use easily recognizable imagery to kind of get the point across that there is a connection between the way our country was founded and these symbols of justice and liberty, and by combining with the police tape, trying to query whether that is an equitable system," June says. "I chose those figures because they were immediately recognizable to a viewer. They wouldn't have to ask a lot of questions [about them], but they would have to go deeper and be like, 'Why in God's name did you wrap them in police tape?'"

The 33-year-old June started her career in photography as a teenager in Alaska, where she ran what she calls "one of those old-time photo parlors." Later in college she took a photojournalism class, and while she says her grade wasn't great due to her unfamiliarity with digital cameras, the teacher made a point of encouraging her to "keep shooting, keep practicing." Since 2011, she's done photography for commercial clients as well as in artistic pursuits in Spokane.

For We Hear You, June created images of five characters: the Statue of Liberty (modeled by Bethany Montgomery), the Lincoln Memorial (Afaria Duke), the Madonna (Michelle Michael), Lady Justice (Ginger Ewing) and Saint Sebastian (Cylas Palacios). June picked her favorite five images (shared on this page), but also let the models choose several they liked, and those additional images can be seen at gracejuneimagery.com/wehearyou.

"I didn't make these photos arbitrarily," June says. "I didn't make them to generate anything but questions that we can ask of ourselves and each other. I absolutely don't mean to attack anyone, but I do have extreme disrespect for a system that protects the corrupt ... It's not about a hate for anything. It's about wondering how we got here, and I'm using art to try to make sense of what I'm observing in the world." ♦

See the complete set of We Hear You portraits at gracejuneimagery.com/wehearyou.

When contacted to talk about her role in Grace June's We Hear You photo essay, Power 2 The Poetry's Bethany Montgomery responded with a short essay we're printing with her permission:


1619. Over 400 years ago. The beginning of slavery in America. Interestingly, we do not talk about this part of our American history more often. I assume because it's embarrassing. It is sad. It is an ugly truth. And from what I have observed in my 25 years "we" like to sweep harsh realities under the rug. Which is what we have done when it comes to the plight of African Americans living in the "United" States.

We can't sit here and act like slavery never happened. It plays a pivotal role in how Black people are viewed and treated in our country. Can we all just stop and think about it?

Africans were brought to America and sold into chattel slavery where they had to survive the most inhumane conditions. Beaten, raped, overworked, malnourished, belittled, and degraded. Literally not even viewed as human beings. This is sick and what's more disturbing is many Americans do not understand the connection between this chattel slavery and systemic racism. Descendants of slaves require more than equality. We must strive for equity (please look up the definition).

Yes, we understand all lives matter. But let's be clear why we must focus on the BLACK LIVES MATTER movement. Our country will only heal and truly become great when our ancestors are properly acknowledged for their role in building America; and current and future generations of African Americans are treated fairly with dignity and respect.

Also, we must acknowledge the crimes perpetrated against the original inhabitants of this land. We demand more media coverage of all missing and murdered Indigenous women. They deserve protection and justice.

Do you hear us?

Love & Lyte to you and yours,
Bethany 'B.Lyte' Montgomery

The original print version of this article was headlined "Questioning Gaze"