Young Kwak photo
Travis Chapman never formally trained as an artist, but he's always been creative. Playing with his daughter's watercolors 15 years ago, he found a talent for painting that's evolved into pieces that mine pop culture and classic art to make meme-worthy new pieces that have caught the attention of Inland Northwesterners and celebrities like Banksy and Tommy Lee.

Once his family is off to bed and the house is quiet, local artist Travis Chapman cleans the countertops in his Spokane home. It marks a new night and a clean slate. It's a ritual he began years ago that is, admittedly, "some kind of OCD," he says.

A roofer by day, Chapman trades his hammer for a paintbrush and sets to work on the nearby dining table with his acrylics. A junky B movie might play in the background. He's seen them all before, so now he can just focus on the paintings while the film's audio plays the scenes in his mind's eye.

His teenage daughters, both home during quarantine, usually get lectured about cleaning up after themselves, when in reality he's the one leaving his art stuff everywhere, he says.

You'd recognize his paintings if you saw them. They contain familiar characters and scenes, but now transmogrified into meme-worthy internet humor.

There's Marvel's Thor smashing through the Berlin Wall, circa 1989. Quint from Jaws sharing a beer with the shark. Star Wars's Kylo Ren alongside N.W.A.

There are more pointed illustrations, too. Like the sea turtle painted by Chapman that went viral, a plastic straw stuck in its nose, snorting lines of cocaine off another turtle's shell. More recently, there's Pooh Bear, styled after a Banksy stencil, releasing a red balloon shaped like a virus into the air.

That last one is "pretty political if you know the history" of Winnie the Pooh and China's President Xi Jinping, Chapman says.

The country banned the animated show after memes began to circulate comparing Xi's likeness to the anthropomorphic teddy bear. There is also speculation that the Chinese government intentionally eased restrictions on travel during the COVID-19 outbreak.

Chapman isn't trying to pick a side of that argument, necessarily, he says. Instead, he's trying to confuse the current political dichotomy.

"People are so divided and on one side or the other. I don't want to be that obvious," he says. "I'd rather be clever."

There are other coronavirus-related paintings, too, like nurses storming the beaches of Normandy armed with cotton swabs, or the grocery clerk angel.

And then there's the bat burger painting. Sesame seed buns, lettuce, cheese and five bats, presumably of Chinese origin, poking their heads out from the ingredients. (The coronavirus is believed to have originated from bats in one of China's so-called "wet markets," where all manner of animals are sold for food.)

One of his more recent successes was a painting of the "jet ski scene" from Netflix's Tiger King documentary, which depicted James Garretson speeding across the water to "Eye of the Tiger."

Chapman's art does especially well online, racking up thousands of likes on Instagram (his preferred social platform, where he's attracted a following of about 70,000), and occasionally landing on the front page of Reddit. Fans share it. New fans find it. Meme makers steal it. Banksy himself has shared Chapman's work online once. So has Tommy Lee from Mötley Crüe.

All of that translates directly to sales in his online Etsy shop. Chapman's already had close to 200 orders this year (that's about a 100 percent increase from the previous year, he says).

His art began on social media and that's where it's been most successful. He's painting memes — or "shitposting" as he calls it — via acrylics.

While some major art events like Seattle's Art Fair have canceled, or rescheduled, during the COVID-19 quarantine, others are increasingly going digital. Spokane's First Friday art walk has gone virtual for the past two months. Coeur d'Alene's annual Art on the Green Festival this summer is going virtual for the first time.

Translating a large scale piece of artwork meant for a gallery to a smartphone or a computer screen isn't exactly easy or effective. Chapman himself prefers the gallery experience, rather than staring into a device.

"If you're scrolling, you have to make your point pretty fast and pretty easy to understand," he says. "If someone is walking by in a museum, they are going pretty slow."

The trick is to hit your online audience hard and fast at first to draw them in, and then you can get them with some of the more subtle nuances.

"It has to be standing in your face enough, which is kinda weird for art, but that's the way people see my art," Chapman says.

For example, in one painting Chapman depicts Vincent Van Gogh working a day job as a Footlocker employee, holding a box of Vans. It takes a darker turn when viewers notice he's daydreaming about his Wheat Field With Crows, which is believed to be the last painting the artist made before he died in 1890.

That was one of his most successful paintings online.

"There's no gatekeepers with the internet, which is cool," Chapman says. "For artists, it's great. You can get exposure. You don't have to be accepted into someone's gallery. The old way of distributing your art is so hard."

Chapman, 46, says art wasn't something he imagined earning money from.

He's always been a creative person. A doodler as a kid. He dabbled in paintings as a teenager.

He went to school at the University of Washington in the early '90s but failed to find a major. "I still don't know what I want to be," he quips. He liked art. It just never seemed viable as a career choice. He dropped out of college and moved back to Spokane, where he took up roofing.

It wasn't until about 15 years ago that he decided to take a crack at watercolors with his young daughter's paint set. 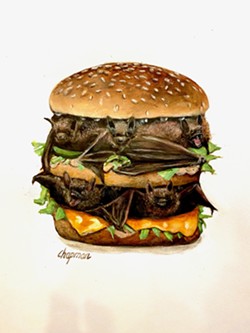 As he got better, he started to move away from typical art subjects, to characters from his favorite movies and TV shows, to more abstract ideas. Chapman will spend days working on a painting that mirrors a classical Renaissance painting like The Milkmaid, but replace the subject of the piece with The Dude from The Big Lebowski pouring himself a White Russian instead.

"A lot of artists are weird, and he's not," says Treasure Dragseth, another local artist. "He's just a typical dad. He owns a roofing company. He just seems normal."

Dragseth helped Chapman when he needed to frame some of his artwork. Her favorite is his painting of Seinfeld's George Costanza posed over a leather couch in boxer shorts. She was also instrumental in getting some of his art put up in the restaurant Gander & Ryegrass in downtown Spokane where she works as a manager.

"It's a high-end, pricey establishment and you look up and there's Spock as a DJ. It does start conversations," she says. "It's not what you'd expect."

"It feels like real art, but it also has a sense of humor about it," Gander & Ryegrass chef and owner Peter Froese says. "I think if I'm being really honest, at the end of the day it gives me a giggle."

"He has such a unique sense of humor and ... most people don't get it. That's the best part," says Spokane Gallery owner Holly Swanson, who highlighted Chapman as an emerging artist back in 2011. "It's like he has a way of painting a perspective most people don't think about."

It's another Wednesday during quarantine, though it's getting harder to tell what day it is at this point.

Things have slowed down a bit for Chapman's roofing business, but he still finds people need repairs done. Working by himself on rooftops is socially distanced enough, he says. Speaking to the Inlander from his parked car after driving home from work, Chapman is somewhat reticent to discuss all the details of his art. It's clear from the phone conversation that he didn't set out to make it big.

Painting is just his way of relaxing after work. Given the chance to make it a career, he says he'd take it.

The lockdown has given many people an opportunity to chase a passion project or build a new skill. Chapman, however, says he's actually found less time for painting. With his family spending most of their time at home, it's become harder to escape distractions and focus on his art.

He doesn't know what he'd do without it at this point, though.

He isn't proud of everything he's painted. Not every joke sticks its landing, and the coronavirus pandemic is an especially sensitive topic. "People are dying, and people know those people," he says.

"Humor can get through that if it's done well, but it can also be a grenade if you don't do it right. It's a tool I have that others don't have." ♦

The original print version of this article was headlined "Viral Art"

The Borders of Truth: Misinformation in the Immigration Debate