Young Kwak photo
Even author Leyna Krow doesn't know what Hollywood will do with her short story.

Leyna Krow's short story Sinkhole begins with the world's most questionable real estate deal. A family finds their ideal house in the perfect neighborhood, but there's one big catch: The backyard has a giant pit in it. The husband and wife soon discover that the hole has magical properties, and if you drop something down into the darkness, it appears again in the living room as good as new. It starts with a broken flashlight, then a cracked picture frame and, eventually, the narrator herself.

Sinkhole first appeared in the Spokane-based omnibus Lilac City Fairy Tales and was reprinted in the Seattle literature zine Moss, and now it has been optioned to be adapted into a feature film by Universal Pictures and producers Jordan Peele and Issa Rae. Krow spoke to the Inlander about the process of working with Hollywood, and the ambiguous genre designation of her story itself. Responses have been edited for space and clarity.

INLANDER: Where did the idea of Sinkhole come from?

KROW: Originally I wrote it for Lilac City Fairy Tales, and the theme for the event was "I Married a Monster." So that was the prompt that I was working off of, and I was really just trying to write something that I thought [Fairy Tales editor] Sharma Shields would think was cool. That was my sole motivation. I wrote it the summer I got married and before my kids came along. Looking back at it now, there's a lot I got right about the challenges of being a woman and having a family. This is what it's like to have kids and feel overwhelmed and feel like you're not doing it right. And hey, there's a big hole in the yard that makes things better, let's get right in it with no regard for the consequences.

I feel like you can read this story as a humorous allegory or as a creepy Twilight Zone-type premise. Was that your intention when you were establishing its tone?

Yeah. For me, it sort of straddles that line. I did want it to feel a little horror-esque, but I'm always trying to write to entertain myself.

Jordan Peele and Issa Rae have optioned the rights to adapt Sinkhole into a film. Is this the first time that has happened with one of your stories?

It's totally new to me, and actually came out of left field. In November, one of the editors from Moss called me. He had moved to L.A. and was trying to make a go of it in the film world. He wanted to take some material and shop it around, and he asked if he could do that with Sinkhole. I wound up talking to 15 different companies and studios via Zoom in my not-air conditioned attic. And, of course, it's COVID time, so my husband is working downstairs and I'm taking meetings, and our daughter's screaming about stuff. But the amazing thing was that everybody I was talking to was in their homes as well. I'd be talking to these studio executives who normally would be wearing a suit sitting in a boardroom somewhere, and instead they're in their living room and their husband is vacuuming with a shirt off behind them. 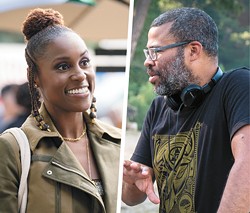 How did you settle on Peele and Rae?

I actually spoke to the executive from Monkeypaw, Jordan Peele's company, pretty early on, and it was a super fun conversation. And then I spoke to folks from Issa Rae's company, and they were really neat. This is a story about perfection and expectations put on women, but it could also be seen through the lens of a Black woman and the expectations that society puts on Black women, which are even more daunting. As a White writer, I mostly think about White people and White characters, and so I was really drawn to this idea of a film that takes this story to a place that I can't. I found that really, really appealing.

It's interesting that someone like Peele, who has a background in both horror and comedy, is taking on a story that could be approached as either horror or comedy.

Right? And I'll be honest, I don't know what angle they're going to come at it from. But I heard some interesting stuff in these meetings. Some folks were gonna approach it as an indie comedy, others as true horror. Somebody was like, "It'd be like Gremlins." Somebody else said this would make a great podcast.

Adapting a short story into a movie can't be easy. What do you think they can do to sustain it at feature length?

The story is five pages. That's all there is. I actually think that the brevity of it is seen as a nice thing, because there's not all this source material to work through. It's really just a jumping-off place. When we were trying to sell the rights to different production companies, I'd hear different people's takes, and everybody was like, "How does the sinkhole work? What happens if you go in it twice?" Maybe there is this law of diminishing returns, or maybe something terrible happens. Or maybe you're transported to a room full of bees — I don't know. A screenwriter is basically going to have to come up with something way, way beyond what's in the story. ♦