When Wes Crago was picked as Spokane's city administrator — arguably the most crucial appointed position inside City Hall — the choice was announced in December with considerable fanfare.

"I am impressed with his leadership style, listening skills, and collaborative approach in working with citizens and staff."

But after Crago resigned the position, the only public acknowledgment of his departure was this: Crago's name was quietly removed from the city directory, apparently sometime on Friday, and Public Works Director Scott Simmons was placed in his spot as "Acting City Administrator." 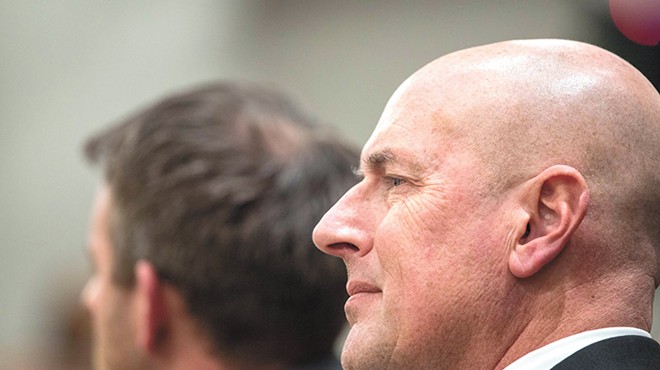 
In an email titled "Organizational Changes" sent to council members Thursday at 6 pm, Mayor Woodward announced both Crago's sudden departure and that she would be implementing an altered leadership structure.

"Wes Crago, who came from Ephrata to Spokane, has stepped down as City Administrator saying that his heart is with smaller towns," Woodward wrote. "Wes played important parts in the City's participation in the regional response to COVID and ongoing public safety needs and public works projects."

Crago declined a request for an interview, writing over Facebook messenger that he was "still adjusting" and wasn't yet "ready to talk." He did not directly answer a follow-up message seeking to clarify whether his resignation was entirely voluntary or if he had been pushed out or asked to resign.

Instead, he issued a written statement that this "was a gut-wrenching decision; painful and disconcerting, but one our family believes is for the best."

"We knew that when we launched the Spokane adventure that this was a possible outcome," Crago added. "We are people of faith, and believe that all things happen for a reason ... and that reason is ultimately Good."


In a phone call this morning, city spokesman Brian Coddington dodged repeated questions over whether Woodward had asked Crago to resign.


Asked why there had been no public announcement on Crago's resignation,  Coddington says that the city was following a process that included first contacting key stakeholders before telling the public about the change.

"As far as the resignation goes, it was fairly sudden," Coddington says, though he added that the mayor and her city administrator had regular conversations. He says the mayor intends to hire a firm to conduct a national search for his replacement.


This is the second high-profile departure from the Woodward administration in her first year.  Tom Bartridge, who had been confirmed as the interim director of Human Resources by the City Council, had resigned by March. Asked if there were any complaints about Bartridge, Coddington said Bartridge's role was always intended to be an interim, short-term position and the mayor wanted to transition to a permanent role.


There's plenty of precedent of new mayors wanting to shake up the city's organizational structure when they first come into office, often by ousting leadership from the previous administration.

But Bartridge and Crago are notable because they were two of Woodward's own picks. In December and January, Woodward praised Crago's 16 years of administrative experience in the tiny Central Washington town of Ephrata and noted how his past on the City Council could help a forge a better relationship with the group.


Former 4th district legislative candidate Josh Arritola had introduced Woodward to both Crago and Bartridge. Crago is his uncle and Bartridge was the executive vice president of his business consulting company. Arritola declined to talk about what led to Crago's resignation, saying he didn't want to speak for Crago or the mayor.


Earlier this year, Chris Jacobson, the former mayor of Ephrata, told the Inlander that he'd had passionate disagreements with Crago behind closed doors — with Crago often restraining Jacobson from making any rash decisions — but says those disagreements ultimately made him a better mayor.

Coddington says he was unaware of any major policy disagreements between Crago and the mayor. Similarly, Council President Beggs says that he hadn't seen any clash between Crago or anyone else in the city.


"Not with anyone," Beggs says. "Not with council. Not with the mayor. Not with the senior staff. He was very much a collaborator. That's his culture that he brought as the city administrator: to be collaborative, to work on relationships first and then get into the policy disagreements."

Crago's resignation came as a major surprise to the council. Beggs praises Crago for seeking a unified collaborative approach to police reform with the council, a marked difference from other cities.

The city of Spokane wants an outside investigation to review serious concerns, the precise nature of which the city won't reveal

"I would say he served her well in getting up to speed on the issues," Beggs says. "I think one of the big wins for the mayor so far has been cooperation with the county on homeless shelter issues. He's been a big part of that."

Crago was placed in major roles, leading the city's initial response to the COVID-19 crisis. He was also placed in charge of setting up a still-ongoing independent investigation into concerns about the Community Health and Human Services department.

Notably, when Crago falsely claimed at a press conference that he wasn't aware of details involving the issue that triggered the investigation, he called the Inlander back to apologize and correct the record a few hours later.

Beggs says he personally offered the mayor any support she needs during the transition.


"My main thing was that I was concerned about was, 'Oh, my gosh, she wasn't going to have her administrator,'" Beggs says. "He was already gone."

Beggs says he hopes a national search will ultimately select an experienced replacement.


"Given a bit of the disruption of the transition now I would say let's get someone with a lot of experience in a similar or larger city," Beggs says. "We'll be a little bit adrift until we get that figured out."

While acting city administrator Scott Simmons has clashed with members of the council in the past, Beggs says he has a good working relationship with Simmons.

In Woodward's letter to the council members, she previewed other possible major changes, catalyzed by the stress that COVID-19 had put on the city.


"The challenges have forced operational reflection that has provided clarity as to what is needed to manage and run a responsive, efficient, and effective City organization," Woodward wrote in her email to the council. "Beginning today, we will pilot a new leadership structure that aligns more closely to the strategic work in the areas of Public Safety and Health, Public Infrastructure, Resident Experience, Management and Budget, and Internal Services. Leaders will be named in the coming days to oversee each of those areas as we also focus on key initiatives in public safety, homelessness, housing and economic development."

Coddington says that the mayor isn't referring to additional staffing changes, but rather to her intention to identify targeted goals for her leadership team to focus on as part of her emphasis on keeping clear communication with the City Council.

Additional details would be released in the coming weeks, Woodward wrote. "Change is difficult and is sometimes necessary to take the next steps as an organization," she wrote.

"It was a privilege and we are thankful for it," Crago says. "Even knowing this final outcome in advance, we would still take it on again."