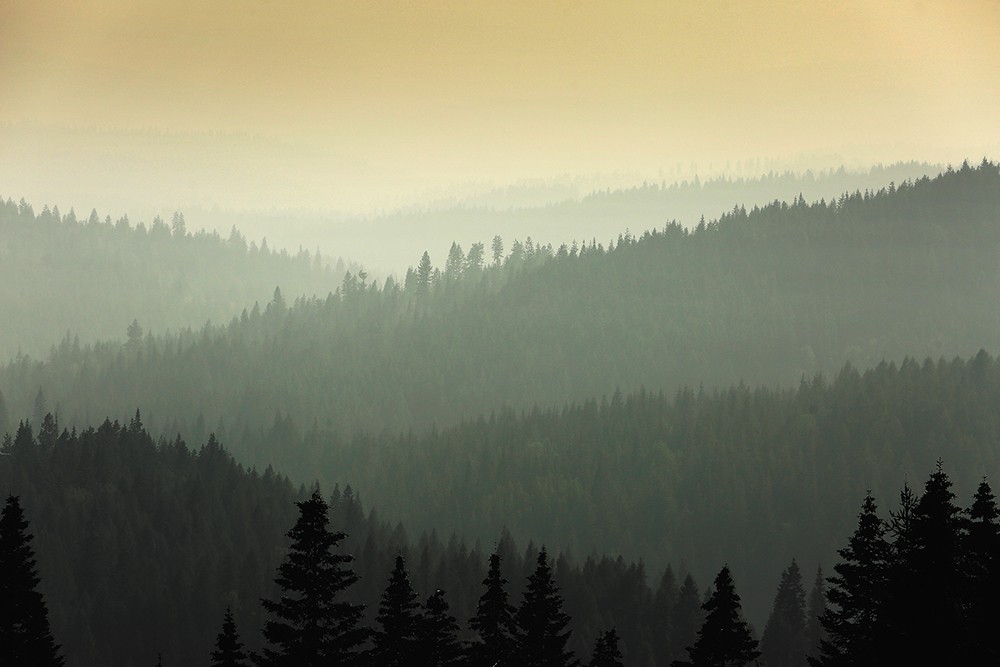 You could taste the air Monday morning. It was so thick with a smoky haze that, from across the river, Spokane's skyline seemed to dissolve into whiteness. Indeed, Spokane had the worst air in the country.

In other words, the City Council couldn't have had better timing for an environmental resolution focused on carbon gas emissions.

Two of the last three late summers in Spokane have been choked by wildfire smoke. And while the wildfires have had multiple culprits — including land-management strategies and idiot campers — a big one is climate change. Crank up the heat worldwide and sap our woodlands of moisture and watch as, summer after summer, forests burn and the smoke chokes the air.

It was with this context that Spokane City Council considered an ordinance calling for the creation of a permanent "Sustainability Action Committee" in order to set the city on the path to an ambitious goal: "100 percent renewable energy for the city's community electricity supply by 2030."

And Stuckart, the two-term City Council president who's running for mayor, is not the sort of politician to pass up a striking visual. As Monday's City Council meeting started, Stuckart has a curtain in the council chamber opened to show the smoke-white sky behind him. And by the time he starts to speak, the sun has dropped low enough to be hanging directly next to his face.

"This should not be controversial," Stuckart says about the ordinance. "In all honesty, it isn't controversial."

Stuckart motions out the window. You're not supposed to look directly at the sun, even during an eclipse. But with the smoke-screen so thick Monday evening, you can stare at the sun — a dark orange that slowly fades to a deep red — as long as you want.

Daniel Walters photo
Council President Ben Stuckart had a curtain in the council chambers opened to show how the smoke had muted the sun.

"The opposition to this ordinance really just boils to two types: Ones that can look out the window at the wildfire smoke enveloping our city and call it 'normal,'" Stuckart says. "And those who recognize that something is not quite right with our climate but are completely OK with someone else absorbing the financial and health-related costs. This issue is too critical to take either opposition seriously at all."

Across four pages, the letter takes aim at the council's proposed renewable energy ordinance, claiming the original proposal constituted a "mandate" to put the city's grid on renewable energy by 2030.

"We are confident that if the city or a third party conducted a cost analysis the public would be horrified at the results," the letter reads, arguing that city officials had estimated the cost could be as much as $20 million.

Moving the city to 100 percent renewable energy would result in a "complicated, massive, and burdensome regulatory scheme," the letter says, that would result in "disastrous rate hikes for our community."

The letter notes the considerable struggles Edmonds, Washington, had with its attempt to move to 100 percent renewable energy. It warns about the "resulting financial stress it will place on everyone living, working" or "operating a business in Spokane."

In particular, it criticizes the process, claiming that the proposal was developed by "a handful of activists" instead of a broad array of stakeholders. Business groups like theirs, Better Spokane and GSI claim, should have been involved in the development of the ordinance.

Indeed, the ordinance had been sparked by the activism of a local anti-fossil fuel group called 350 Spokane. After the group approached City Council members about a clean energy proposal following a town hall meeting in April, the council formed a . It included not only council members and 350 Spokane, but representatives from the Spokane Tribe, the Lands Council and Avista, the region's biggest energy utility.

Initially, the group merely wanted a nonbinding resolution. But at the urging of Stuckart's legislative aide, Adam McDaniel, the council pursued a legally binding ordinance, requiring a sustainability committee to create a "Climate Action Plan," aiming to switch the city over to renewable energy by 2030.

350 Spokane celebrated the switch, claiming "the measure will include the 100 percent renewable pledge in city law." But Mayor David Condon, meanwhile, raised concerns that "using an ordinance effectively codifies this goal and could potentially be used in future litigation if the goal were not achieved."

Councilman Breean Beggs disagreed. In his view, the ordinance only mandated the creation of the Sustainability Action Committee and the pursuit of the goal. Nevertheless, Beggs made a last-minute modification to the ordinance: The words "aspirational" and "strategic" are added to clarify the 2030 goal.

The change won the public support from the most crucial stakeholder: Avista. Ultimately, six out of seven council members voted to support it.

Even the sole opposing vote, Mike Fagan — who jokes that he's "militant and ignorant" before he calls the premise of man-made climate change a "lie" — praised the council for clarifying that the goal was merely aspirational.

But activists don't all see "aspirational" as a synonym for "toothless." Caleb Heeringa, deputy press secretary of the Washington state chapter of the Sierra Club, noted that the ordinance could be powerful in, say, encouraging Avista to move away from supporting a coal plant.

"This is a statement that the citizens of Spokane want to move to cleaner energy," Heeringa says. "It's going to be really hard to go against the will of the largest city in Avista's service territory."

Beggs says the ordinance will have a massive impact, simply by directing city operations toward the renewable goal.

Across a nearly four-hour council meeting, a long line of citizens in favor the ordinance, making a broad array of arguments on solar power, sustainability, red-band trout, coral reefs and — most of all — wildfire smoke. A speaker from Bulgaria jokes that the air in Spokane reminds him of home.

But Stuckart's speech early on is the meeting's clear climax.

"I got a letter today," Stuckart says. He starts out slow and calm. "And I want to address that."

And then, with a rapid-fire intensity and volume of a former college debate champ, he tears into the Better Spokane's letter point by point, lancing into the arguments with venom and contempt. He says the letter is riddled with "doozies." He calls on the audience to think of the children starting kindergarten this week.

He says it's "embarrassing that our local chamber of commerce would share their letterhead" with Better Spokane. He slams Better Spokane for daring to ask to be invited to the table in the process, accusing them of being a "dark money political action committee," who "partnered with Steve Bannon-owned foreign data company Cambridge Analytica to steal our citizens' data to influence political campaigns."

Stuckart insults Better Spokane for its fossil-fuel-backed campaign last year to oppose an oil train safety ballot measure (even though Stuckart himself had concluded that an earlier version of that measure was not "legally defensible").

The purported $20 million cost estimate, he says, is absurd. He pooh-poohs the argument that the ordinance would "wreck our economy, cost local jobs and put Spokane at a disadvantage," noting the city's economy continues to flourish despite all the dire prophecies business groups made against the city's sick leave mandate debate in 2016.

"Minneapolis, Madison, Orlando, Portland, Salt Lake City, you name it! I'm not sure I recognize the economic disadvantage of adopting this ordinance," Stuckart says. "If a business doesn't locate in Spokane because we are committed to sustainability and are not interested in wrecking what is left of our environment, then so be it. I could go on all night picking apart the rest of their letter."

By the time he's finished with his nearly 10-minute machine-gun tirade — calling upon the crowd to just look at the sky outside the window — the audience explodes with applause and laughter.

Cathcart, the head of Better Spokane watching from the back of the council chambers, is amused, too. Stuckart's speech was inaccurate, he says, but was "darn entertaining."

But Cathcart doesn't consider the council vote to be a loss. Modifying the ordinance to clarify that the goal was "aspirational" is a big deal, he says. Had it been called "aspirational" from the beginning business groups would have been frustrated, he says, but probably wouldn't have been organized to oppose it.

"It's a victory tonight, quite honestly," Cathcart tells the Inlander over Facebook Messenger, as the red . ♦

The original print version of this article was headlined "Breathing Smoke, Spitting Fire"