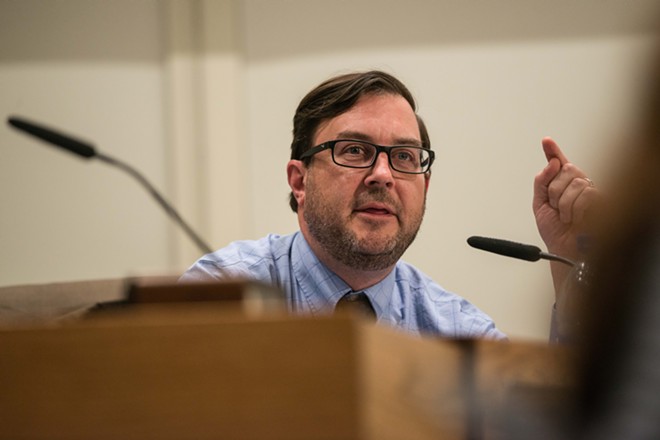 This month, City Council members are again the subject of a human resources inquiry. According to the Spokesman-Review, council members Ben Stuckart, Karen Stratton, Candace Mumm Kate Burke were sent letters from HR about concerns that they'd been bullying employees during public meetings.

But this time, instead of eagerly cooperating, the Spokane City Council is urging the investigation to be shut down. Instead, they say, council members should be the ones to determine how their peers or employees are investigated.

Council members voted unanimously to send that letter to the City Attorney's Office on Monday.

Cavanaugh points out that the city administration can't force the legislative branch to participate in any investigation or fact-finding effort. But similarly, she says, the City Council can't demand that human resources shut down a fact-finding effort sparked by city employee concerns.

"We will do what we need to do to protect the employees in the executive branch," Cavanaugh says. "It’s human resources' responsibility to gather the information by people who are employed by the mayor."

"All the City Council members agree that any complaints that are filed against council members need to be investigated," Beggs says. The question is, he says, by whom?

Either way, in this recent case, says, there hasn't actually been an official formal full-scale human resource investigation initiated.

"We have had employees come forward and share with us concerns," about City Council members, Cavanaugh says.

And right now, she says, the city is in its "information gathering" or "fact-finding" stage.
There wasn't an officially signed formal complaint, Cavanaugh says.

"I requested that we not have one," Cavanaugh says. "This is an issue with behaviors that we can deal with at the lowest appropriate level and try to resolve them."

And yet, in the layperson's sense of the word, there is an investigation at some level. Cavanaugh hired an outside attorney from Bellevue to look into the concerns.

"There are members of the council that are not real comfortable with me personally," Cavanaugh says, explaining the decision to bring in an outside fact-finder. "I think it’s appropriate for someone who is not even from the city of Spokane, to come in and independently [look at the concerns.] "

Eventually, a report will be completed, Cavanaugh says, and the City Council can decide how to handle it.

"That information we gather will be provided to the decision-makers involved," Cavanaugh says.

She points out there's plenty of precedent for these actions.

Here are just a few examples the Inlander identified:
Burke later revealed that she had been a victim of harassment from Rush as well.

Yet, in the letter from City Council, a different precedent was cited.

"In the past, when an investigation was needed into the actions of executive branch leadership, the mayor and council collaborated on an independent inquiry by jointly selecting a third-party investigator and a joint council/administrative oversight committee," the letter says. "As a co-equal branch of government, the City Council is owed the same deference here."

Indeed, during the controversy around sexual harassment allegations against former Police Chief Frank Straub,  an independent investigator was chosen by the mayor and the City Council. That's the precedent that Councilmember Candace Mumm says she wants to be followed in the future for investigations of councilmembers. The mayor and the city council would agree upon an outside investigator.

Still, in Stuckart's role as council president during the Straub investigation, he didn't exactly take a back seat. In fact, he publicly called for the mayor to force employees to participate or be fired. He also repeatedly raised the prospect of using the council's subpoena power to force employees to answer questions.

Ultimately, he was even accused of "bullying" by attorney Laura McAloon, for his comments about her role on the joint panel overseeing the investigation.

"I am flabbergasted by the animosity coming from the council president for no logical reason whatsoever," McAloon said then. She ended up withdrawing her name as city attorney because of the conflict.

And how about in 2005, during the Mayor Jim West scandal?

The City Council took over the investigation after a city-attorney-led panel collapsed. It was a classic example of one branch of local government serving as a check on the other.

Stuckart was not immediately available for comment on Thursday. But Councilman Beggs and Councilwoman Burke both several council members were suspicious about whether the complaints were politically motivated.

"Right now, part of the council thinks this [employee complaint] letter is political," Burke says. "I can only assume the best intent. I assume employees have felt like we're bullying them. I take that complaint very seriously."

Burke says that she voted in favor of the response letter stressing the council's independence because she felt that was proper protocol, not because she was opposed to an HR investigation. She says she would cooperate with any HR investigation and says she wants to know if any aggressive questions of employees were interpreted as bullying behavior.

“I feel there’s a lot of tension between council and employees, for sure," Burke says. She herself approached human resources earlier this year with informal questions about whether Stuckart was bullying her during City Council meetings.

Cavanaugh says that the City Council is welcome to conduct their own investigation if they so choose.