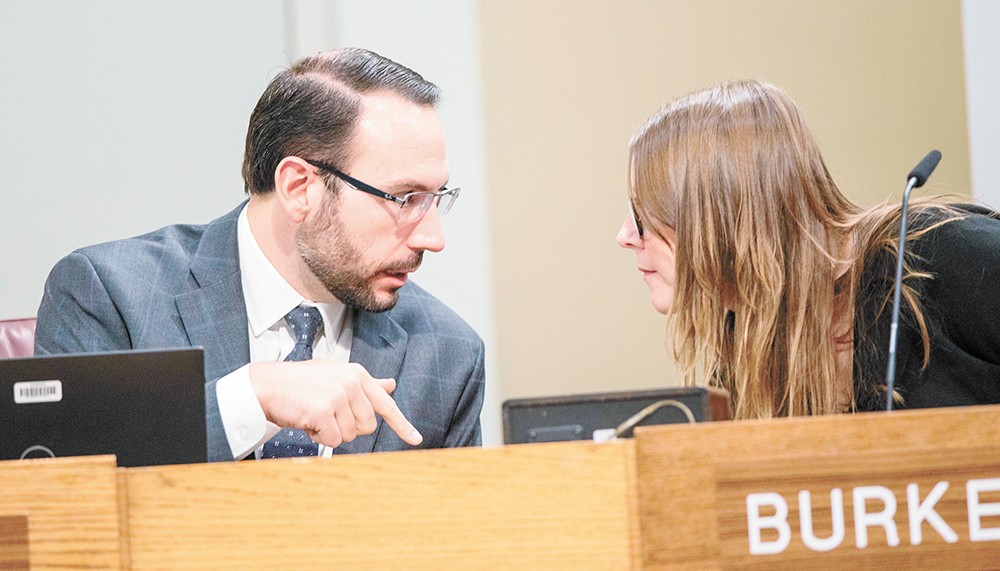 Two years ago, when Councilwoman Kate Burke first took her seat on the Spokane City Council, she immediately made her mark with a slew of "no" votes. Any time an ordinance got a substantive last-minute amendment, Burke would vote against it.

To Burke, it wasn't about the policies — it was about process. Altering legislation shortly before voting on it, she argued, denied the public the chance to weigh in on the revised proposal.

Her hardline tactics didn't win her very many friends on the council dais, and Burke relented after a few weeks, considering the battle lost. Yet her stand won her support from an unlikely source: conservative Michael Cathcart, director of Better Spokane, the right-leaning business advocacy group.

"He had reached out to me saying, 'No, we should totally do something about this,'" Burke recalls.

Today, Cathcart sits next to Burke on the council, the two seatmates representing northeast Spokane. In one sense, nobody's politics are further apart.

In April, the two plan to hold a "transparency town hall," gathering citizen feedback on what they think should be changed about the City Council itself. They want to talk about everything from which meetings get broadcast, to when they're held, to what the public gets to talk about.

And in Cathcart's case, he's tackling the issue on two fronts — from his office in City Hall and from his role as the director of a political action committee that can persuade voters to do what the City Council won't.

WHAT YOU DON'T SEE

"There's a lot of little things that have driven me crazy for years," Cathcart says. "I believe they drive other people crazy."

He argues that council agendas should be released sooner, that citizens should be able to sign up to speak at council meetings digitally and that the council should do more to explain wonky proposals before they come up for a vote.

Many of the council's most important negotiations and illuminating conversations aren't made at Monday night meetings, he says. They happen in the committee meetings and study sessions that aren't broadcast to the public on City Cable 5. Some committee meetings — like those grappling with issues like homelessness and public safety — aren't even audio-recorded, says Spokane City Clerk Terri Pfister.

"If not broadcast live, they should at least be filmed and screened after the fact," Cathcart says. He and Burke have been brainstorming ways committee meetings could be scheduled to allow for citizens — many who have work during the day — to be a part of those discussions.

Right now, members of the audience are banned from discussing upcoming council legislation at the council's open forum until the night the issue is voted on. Ironically, that means that when a major issue is coming up, it gets less discussion at council meetings.

"Let's take the landlord-tenant deal, for example," Cathcart says, referring to a particularly controversial rental regulation ordinance. "It gets scheduled in December, then it's postponed until March, which means for four months, nobody can comment on it directly."

Cathcart says that encouraging the public to speak in front of the council about issues early on could allow flaws to be addressed and problems identified long before a vote is taken.

But while City Council President Breean Beggs supports the idea of recording more meetings — as long as it isn't too expensive — he draws the line at allowing everybody to talk about upcoming ordinances. He notes that citizens can already email and call their councilmembers whenever they want, and now that anyone can talk at council meetings for three minutes every single week, he's worried about those meetings dragging on.

"For weeks and weeks on end, they could continue to talk about one issue, and just that issue," Beggs says.

But to Burke and Cathcart, the prospect of spending more time listening to the public at council meetings isn't something to be avoided.

"Honestly, I feel like that's our job," Burke says.

Even though Cathcart is the council's sole conservative, he has a powerful tool that a politician like Burke doesn't: control of a political action committee.

Even before he was elected in November, Cathcart managed to get sweeping transparency legislation put into the law — something other council members had opposed. Last year, voters overwhelmingly approved a Better Spokane-championed initiative to require the city's public unions to hold negotiations in the open.

As it stands, the city has gone three years without a police contract — but the public has no idea who or what is causing a holdup. All the bargaining has taken place behind closed doors.

"This is supposed to be public, right?" Cathcart says. "So theoretically, I should be able to tell you, and not have an ethics violation."

But for now, he's restricted: Despite the plain language of the initiative, the city hasn't thrown open the doors of current ongoing union negotiations to the public eye.

While Beggs opposed Cathcart's initiative, believing it was a violation of state law, he says the city should try to implement the ordinance swiftly, even if they have to go to court to defend it.

"Voters said they wanted it," Beggs says. "That means Spokane should be doing everything we should to get it."

He praises Cathcart's curiosity, approachable mindset and willingness to communicate. Still, he has questions about Cathcart's role as a paid director of Better Spokane. Better Spokane has campaigned against income taxes, oil train regulations and, in 2017, unsuccessfully spent over $15,000 to try to defeat Beggs's city council bid.

In fact, former Council President Ben Stuckart once attacked Better Spokane as an avatar of what was wrong with politics — money that came from obscured sources.

Today, Cathcart says Better Spokane has voluntarily disclosed most — though not all — of their top donors, and says the group's lawyer assures him that there's no conflict of interest with him serving on the council as long as he recuses himself from issues that could financially benefit a Better Spokane board member.

For the last year, Better Spokane has spent around $8,000 to upgrade its website, attempting to develop software to make it easier to track council votes, ordinances and proposed amendments.

"If you are 'Joe Blow Citizen' or even, frankly, 'Mr. Reporter,' there's really no way to go on the city's website and see how everybody's voted on one issue or to find issues in an easy way," Cathcart says.

A crude beta version of the local "Vote Tracker" recently went live on Better Spokane's website. One potential category tag for council votes — "anti-business" — has already raised some eyebrows. But Cathcart tells the Inlander that that particular category is just a placeholder, and the final Vote Tracker product will refrain from editorializing.

"This is something people have been clamoring for for years," Cathcart says. "There's a lot of people that have no clue, for better or worse — and I'd typically say for worse — have no idea what's going on in City Hall." ♦

This article has been updated to reflect that finance committees are recorded.

The original print version of this article was headlined "Transparent Motivations"