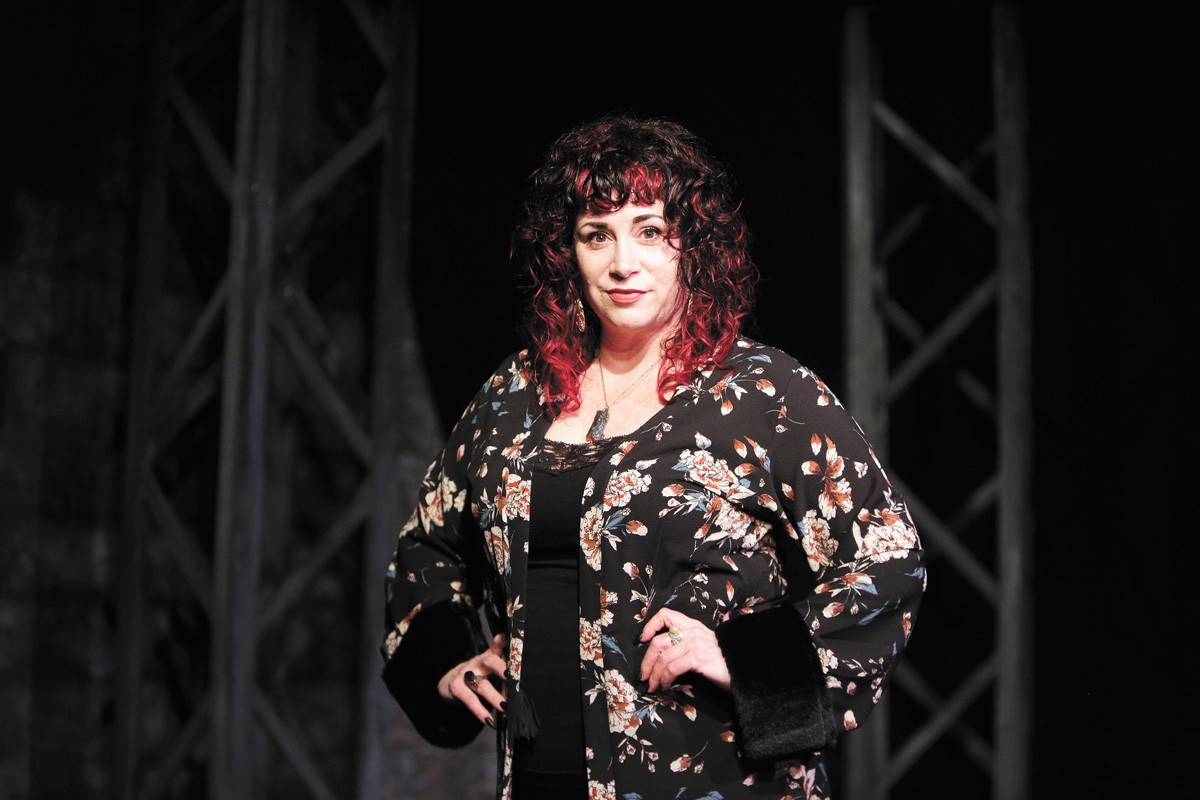 For almost a year, performers and theater lovers have sat at home dreaming of the creative outlet that local productions provide. To help fill that void, Spokane Civic Theatre is coming back to life with Civic Presents: Leading Ladies, a virtual show dedicated to the theater's female stars past and present.

For the performers, getting back on stage can be a nerve-wracking experience after a year away. And while the show is prerecorded to maximize safety, it can still be challenging.

"I'm a little nervous," says Abbey Crawford, who has performed at Spokane Civic since she was 19. "Two weeks ago I went in to rehearse, and not going to lie, I cried a bit going in. Theaters all smell the same, and they feel like home. The theater always feels like home. It was emotional and delightful."

Crawford says she hasn't performed live since last March, when she sang during Mardi Gras 2020 in New Orleans.

"I haven't been that creative at all," Crawford says of her pandemic life. "My daughter taught me some TikTok makeup tricks and from there I have been creating the 'patron saints of the pandemic.' I have saints of toilet paper, plastic gloves, snacks. My most recent was a saint of serotonin. I have also started needle quilting; I've created these felt things because I got to stab something for six hours, which is great for my anxiety and rage."

Crawford has performed in many shows and teaches cabaret classes at the Civic. She heard about Leading Ladies from the theater's creative director, Jake Schaefer, after doing a show in November.

"We started with a short list of women who have portrayed female principles in plays and musicals alike at Spokane Civic Theatre for the ages," Schaefer says. "That gave us four or five legendary ladies. Then we went through the last handful of seasons and notated other females who played principles and reached out to all of the ladies on that list."

The full cast includes 17 actresses who have spent three weeks rehearsing in anticipation of their filming slot before the Leading Ladies show is released online Friday.

"We struck gold with the amount of interest in the performance," Schaefer says. "We put together some strict health and safety protocols and built a rehearsal schedule. We see one performer for two hours and then for an hour we clean in between."

According to Schaefer, the theme was left simply at "leading ladies." They allowed each performer to pick a song to be accompanied by piano that they believed exemplified that theme.

Crawford picked "Nobody's Side" from the musical Chess. She chose it because of its first lines: "What's going on around me is barely making sense, I need some explanations fast!" She says this song is perfect for the current climate and is ingrained in her from her youth.

"The show [Chess] is weird, but the music is fantastic," Crawford says. "This song is about a woman who doesn't need to wait for anyone to say things are OK, which is relatable with what we are dealing with now. You can't count on the world, so just do whatever you want to do, which is my mantra now. I'm going to be 48 — I can allow myself the freedom to do what I want. I can still get up and sing and make my choices."

While the filmed, virtually delivered experience is different than performing for a live audience, Crawford is still excited and grateful for the opportunity.

"All of the women who are in this show, we have all been leading women on Civic's stage," Crawford says. "I think it's a fascinating group of women because we all dealt with some kind of thing. It's hard to be on stage in front of people, and [yet] this is where we are most comfortable. It's fantastic that Jake has given us this opportunity to be happy; it's such a joyful thing to sing, and it's going to be weird but I'm grateful."

Performer Mary Starkey, who has been performing in productions at the Civic since 1983, also got a call from Schaefer.

"There was no question in my mind that I wanted to do it," Starkey says. "We all miss doing theater; we all miss doing live theater. The last show I did ended in February of 2020, A Gentleman's Guide to Love and Murder, and we had such a great experience doing it and audiences loved it. Then the pandemic hit."

While different shows and performances are starting to get off the ground now, for almost a year performers were left to find different outlets for their creativity. Starkey channeled hers in the kitchen.

"I love to cook and to bake," Starkey says. "It was really fulfilling. That's where my creativity went for a while. I make the best chili; I don't like other people's chili. I learned to make a really great rustic loaf of bread and got into making different kinds of soups, vegan soups, white bean soups. I really enjoyed that."

However, Starkey also tried to keep the hope of live performances alive during the pandemic while continuing to rehearse.

"When we thought that the pandemic wasn't going to last very long I auditioned and was cast in a show for Stage Left Theater," Starkey says. "We auditioned through Zoom; those who were cast had Zoom rehearsals. We kept that up until we realized that we were not able to do this show any time soon."

While Starkey identifies as more of an actress than a singer, she is still excited to share her voice and be a part of a performance with so many talented women.

"They asked me what I wanted to do, and I asked to do "The Ladies Who Lunch" [from the musical Company]," says Starkey. "I played the part of Joanne in 1998 and in a couple showcases since then. I'm familiar with it. I have a lot of great musicals that I've been a part of and great songs I've had the great fortune to sing, but that was appropriate for me to choose."

As Starkey prepares for her role in Leading Ladies, she is also looking towards getting involved in future projects as the pandemic lifts.

Schaefer's main focus currently is making Leading Ladies a success. Part of that includes making the show accessible to anyone who wants to watch it, while also supporting the theater. That's why there is no set ticket price for this online production.

"Because we are filming it in the building, we did want to provide an opportunity to give [donations]," Schaefer says. "We have a range of ticket prices at Civic [normally] and that's important to us. ... So, we thought let's be wide open and inclusive for what people can give should they want to."

Jean Hardie, whose first performance at Spokane Civic Theatre was in 1981 in Kiss Me Kate, has been performing there for almost 40 years and is very enthusiastic about the Leading Ladies show and its meaning.

"I thought it was a great idea," Hardie says. "That's not to put down leading men — I think that it's nice for the leading ladies to get their due because even though women are extremely important, the men are usually the central character of the show. So, it's nice to do something that's musical and do something for the ladies."

Hardie is singing "Liaisons" from A Little Night Music, the song she sang when she was in the Civic's production of the show.

"I picked it for a number of reasons. It's a great character song; it's more of a storytelling piece," Hardie says. "It also doesn't require a lot of movement because I didn't want to be jumping around in front of a camera. I played that role in A Little Night Music, so it was easy to get it back into my memory. I worked with [pianist] Henry McNulty, who played for that production as well, so we fell into it a little easier. I hope it will be a nice contrast to what the other women will be performing."

While many found the transition to the lockdown a hard one, Hardie found it to be easy.

"I love being at home," Hardie says. "The pandemic has given me the opportunity to say 'No, I can't do that' or 'I can't go out.' I'm of an age that is considered in the at-risk category. So, I have kind of enjoyed being at home. I've done some writing, which I've gotten into in the last few years. I've taught a class virtually at Saint George's School. I've done a lot of nothing, and I've just enjoyed it because it hasn't been that bad for me. I know a lot of people suffer because they can't socialize, but we can Zoom and talk on the phone."

Getting back in the studio is a unique experience for each performer, and for Hardie it was a joyous one.

"It was really fun; it was an easy, no pressure performance," she says. "Jake had everything set up great. I went in, sat in my chair, and we went through the song a couple of times. Filming was not my favorite because there was no audience; I was just singing to this black void. But because I couldn't see anything it was a lot like being on stage under a bright light. So you just imagine that you are communicating with them. It was a lot of fun, everyone was on their game."

Civic Presents: Leading Ladies is a show that everyone involved in is excited about. And the opportunity to perform, even in a filmed program delivered online, is something they value.

"It is fantastic that the two big theaters, Civic and Stage Left, in Spokane are doing things to move the conversation forward instead of sitting and wallowing in sadness," Crawford says. "They are the best of us, and they are great at reaching out, making sure everyone is OK. I want people to realize just how important the arts are in this time. You watch TV for a year because you have nothing else to do. There is no way for anyone to get through this last year without the arts. And if you can support them, please do. I am proud to be a part of this." ♦