Spokane Commission candidates at a loss to explain why Avista dropped $200K to support Kuney, French 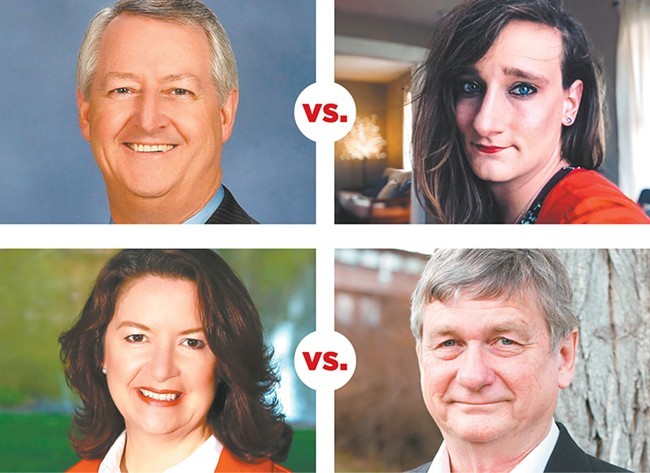 Clockwise: Al French, Robbi Katherine Anthony, Mary Kuney and Rob Chase
It's not unusual for a company like Avista to donate money to support an election campaign.

It is rare for Avista to independently buy campaign ads to support certain candidates. And it's unprecedented for Avista to spend a total of $200,000 on those ads.

And yet, that's exactly what Avista did this year, shelling out $100,000 each for ads that began running this month supporting Spokane County Commissioners Mary Kuney and Al French, respectively. Considering Kuney and French haven't raised $200,000 between them, it's a big development in the race for the two commission seats. And their challengers for the commission — Rob Chase and Robbi Katherine Anthony — wonder why Avista would make such an investment.

If you ask Chase, it's no coincidence that Avista is spending this kind of money on his opponent, Kuney, at a time when Chase, currently Spokane County treasurer, is trying to block the merger of Avista and Hydro One, an electricity transmission and distribution provider based in Ontario, Canada.

"I think they feel threatened by me," Chase says.

Chase fundamentally opposes the idea of a "foreign entity controlling our utilities," he says. He is trying to stop the merger by invoking "coordination," a little-known federal law that would allow local government to potentially have more influence on the sale.

The Washington Utilities and Transportation Commission (UTC), which is in charge of approving the merger, says that law does not apply in this case. In letters to Chase, they've maintained that coordination only applies when it involves "federal lands or projects or processes subject to the Federal Land Policy and Management Act or the National Environmental Policy Act; nor does it necessitate review under the State Environmental Policy Act."

The Spokane County Commission has nothing to do with the potential merger, says Kate Griffith, spokeswoman for the UTC. Still, Chase remains defiant. "I think it does apply to them," Chase says. "If they can take me out of office, that threat can go away."

Kuney, who Chase is trying to unseat, rejects the idea that it had any influence on Avista's decision.

"The thing that frustrates me the most — and I don't know what they're trying to influence — is the fact that any entity can drop that much money in an election and try to sway the election."

Not only does the County Commission not have anything to do with it, she says, but as a Republican, she doesn't think the government should be interfering with private business.

"I can go out and shoot arrows into the sky to hit the moon, but that doesn't mean I have a chance of doing it," French says.

He points out that Avista was already "ripe" for a merger. He says it's a good thing for Spokane residents that this merger would allow the headquarters to stay in Spokane, rather than having the headquarters in another part of the country. And unless there's a change with the UTC, the rates won't go up, he says. He calls Chase's attempts to block it a "perpetuation of fear and misinformation."

French, for his part, says he too was surprised Avista dropped that kind of money in support of himself and Kuney. But he notes that Avista has supported every one of his campaigns. "We have a mutual alignment in growing the economy and protecting the quality of life," French says.

Collins Sprague, senior director of government relations for Avista, says the ads were meant to inform voters about the "great job" that Kuney and French are doing on the County Commission.

"We've had an excellent working relationship and truly respect the work Al and Mary have done — what they're doing for the county," Sprague says.

The money did not come from customer utility rates, but from shareholders. He flatly denies it had anything to do with Chase's opposition to the potential merger.

Anthony doesn't think it has to do with Chase's attempts to block the Avista sale. But she calls Avista's campaign ads a "very strange thing to do."

"The thing that frustrates me the most — and I don't know what they're trying to influence — is the fact that any entity can drop that much money in an election and try to sway the election," she says.