Ted Cummings (left) and Josh Kerns
District 1
Ted Cummings, a Democrat and chairman of the clerical and technical unit for United Steelworkers Local 338, hopes to unseat Republican Josh Kerns, who has been on the Board of County Commissioners for four years. The two disagree on many issues, but they most vehemently disagree over Kerns' not speaking out against Rep. Matt Shea for, among other things, visiting armed militants at an eastern Oregon wildlife refuge. Cummings says it's a moral obligation for elected officials to call out a wrong and "confront hate." Kerns, meanwhile, says that while he doesn't agree with everything Shea has done, it's not Kerns' place. He argues voters should instead focus on his work in making Spokane a "welcoming community and the best place for everyone to live, work and raise a family." (WILSON CRISCIONE)
click to enlarge

District 2
Incumbent Mary Kuney and challenger David Green may both have backgrounds as Certified Public Accountants, but that doesn't mean they agree on how to spend money for Spokane County. Green, a Democrat, says the Republican county commissioners in the past have favored "business interests over people." He disagrees with how the commissioners spent the $91 million from the Coronavirus Aid, Relief, and Economic Security Act, arguing more should have been put toward food and rental assistance. He also criticizes the commissioners for cutting funding to the Spokane Regional Health District in 2017. But Kuney says her decisions have focused on people, along with businesses and economic recovery, pointing out that the county did put millions in CARES money towards food and rental assistance. She argues she has the financial expertise to continue to lead the county in the years ahead. (WC)

State Senator
Andy Billig, left, a Democrat and the state Senate majority leader, touts his successes in getting legislation passed that benefits Eastern Washington, including funding for the North Spokane Corridor and the Senate's COVID-19 response bill. But challenger Dave Lucas, a Republican and a retired Marine lieutenant colonel, argues Billig hasn't wielded his power appropriately. He says the Legislature, facing a budget shortfall, needs to have a special session to deal with the crisis. (WC) 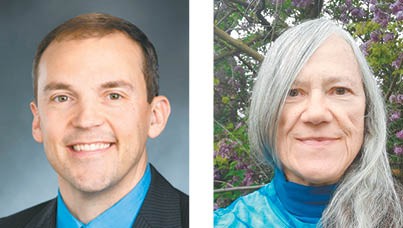 Position 1
Marcus Riccelli, left, project manager for CHAS Health and a Democrat who's served as a state representative since 2012, helped create the Washington State University medical school, and he pushed a bill that gives nurses rest breaks. He got a "Breakfast after the Bell" bill passed that gives low-income students meals in the morning, and since the beginning of the pandemic, he launched an effort called Spokane Food Fighters to serve meals to those struggling with food insecurity. His challenger, Laura Carder, is a Republican and a Quality Assurance Specialist. She says she will make the state more business-friendly by shedding regulations. She's against mask mandates, and she is against taxpayer money paying for abortions and gender-reassignment surgeries. (WC)

Position 2
Timm Ormsby, left, who has worked as a cement mason, has served in this position since 2003, the same year Bob Apple started on Spokane City Council. Today, Ormsby remains as a state representative, and he's the current chairman of the House Appropriations Committee. Bob Apple, meanwhile, was on Spokane City Council until 2012. The two have a stark contrast in ideology: Ormsby is a Democrat who believes in a mask mandate, while Apple, a Trump supporter according to the Spokesman-Review, questions a mask mandate and has minimized the risks of COVID-19, saying "people die from a cold," too. (WC)

State Senator
Mike Padden, left, has held this seat since 2011, and has focused much of his time on sponsoring bills related to public safety — strengthening DUI laws and, recently, helping parents of minor crime victims be compensated for their time in court hearings and counseling. He's up against John Roskelley, well-known among locals as a famed mountaineer and a former Spokane County commissioner. Roskelley, a Democrat, wants to focus on protecting seniors, retirees and the disabled. He also thinks the state has a spending problem — he has said he wants to amend that, while also eliminating tax exemptions for corporations. (WC)

Position 1
Rep. Bob McCaslin is not as much of a lightning rod as Rep. Matt Shea — the current holder of this seat. But McCaslin, who has represented this district in Position 2 before filing for Position 1 when Shea dropped out, is certainly a Shea ally: He supports Shea's idea to make Eastern Washington its own state, and he's defended Shea in response to bad press, including when news broke that Shea offered to do background checks on political enemies. Democrat Lori Feagan, meanwhile, says that while it's important to get Shea and his allies out of office, it's just as important to get someone like her in office. Feagan is a nurse practitioner with decades of experience in health care and has said she wants to "rectify" the state's "upside-down tax structure." (WC)

Position 2
Former Spokane County Treasurer Rob Chase, left, was recruited to run for this seat by Rep. Matt Shea, whom Chase considers a friend, but Chase's views can be more unpredictable. He typically holds libertarian views, yet supports an idea touted by Democrats to create a state bank. And dangerously, Chase has repeatedly promoted QAnon, the baseless, bizarre, anti-semitic conspiracy theory that predicts a showdown between Donald Trump and a horde of child-sacrificing satanic leftists who control the world. Chase's opponent Lance Gurel, meanwhile, positions himself as the reasonable candidate in this race. Gurel is a Democrat who says he believes "families and workers come first" and he supports taxes on high earners instead of having the burden on low-income families. (WC)

Position 1
Republican Mike Volz, left, was elected to this position four years ago, and for the last 10 years he's served as chief deputy Spokane County treasurer. Zack Zappone, a Democrat, is a former full-time teacher, and now a substitute teacher in Spokane. The two differ on how to handle the budget problems facing the state: Volz wants to reduce spending overall, and Zappone wants to lean on the federal government in order to avoid cuts to education and other services. (WC)

Position 2
Jenny Graham's sister was murdered by the Green River serial killer, and that tragedy has shaped her advocacy for victims of human trafficking and abuse. But Graham has, unwittingly, spread baseless conspiracy theories — including elements of QAnon — on Facebook, including, for example, a link to a website that claims that demons, or possibly reptilian-human hybrids, are putting hundreds of thousands of missing children into sex dungeons. When the Inlander wrote about Graham sharing these links, she called reporter Daniel Walters a vulgar name and left a furious voicemail accusing him of being a "lying piece of shit." The story of the voicemail blew up into national news, yet Graham never pointed to a specific inaccuracy in the original article. With all that said, Democrat Tom McGarry, a lawyer, faces an uphill battle in defeating Graham. McGarry says these are serious times that call for "serious people," and he says Graham doesn't exhibit the leadership needed to continue to serve in this position. (WC)

Already required in Washington schools, sex education would become more comprehensive for all ages should Referendum 90 pass. The referendum would enact Senate Bill 5395, which the Legislature passed early this year.


While parents opposed to the measure have expressed concerns about their ability to take their children out of the courses or control the local lessons, the referendum will still allow parents to opt their child out and districts will continue to select their own curricula.

Students in kindergarten through third grade will be taught social-emotional lessons like how to recognize emotions and personal opinions, and to respect that other people have different emotions and opinions. Districts may also offer age-appropriate sex-education such as understanding that "boys and girls have some body parts that are the same and some that are different" and learning medically accurate names for those body parts.

For older students, comprehensive sex education is already taught in many districts, but Referendum 90 would require that all districts at a minimum include lessons covering seven bullet points. Summarized even more succinctly than in the voter guide, those include lessons on: 1) The physiological, psychological and sociological developmental process; 2) Developing the skills to communicate respectfully and effectively, and to choose healthy behaviors and relationships based on mutual respect and affection, free from violence, coercion and intimidation; 3) Health care and prevention resources; 4) Abstinence and other methods of preventing unintended pregnancy and sexually transmitted diseases; 5) Developing meaningful relationships and avoiding exploitative relationships; 6) Understanding the influences of family, peers, community and the media on healthy sexual relationships; 7) Affirmative consent and responding safely and effectively when violence or a risk of violence may be present, with strategies that include bystander training. (SW) 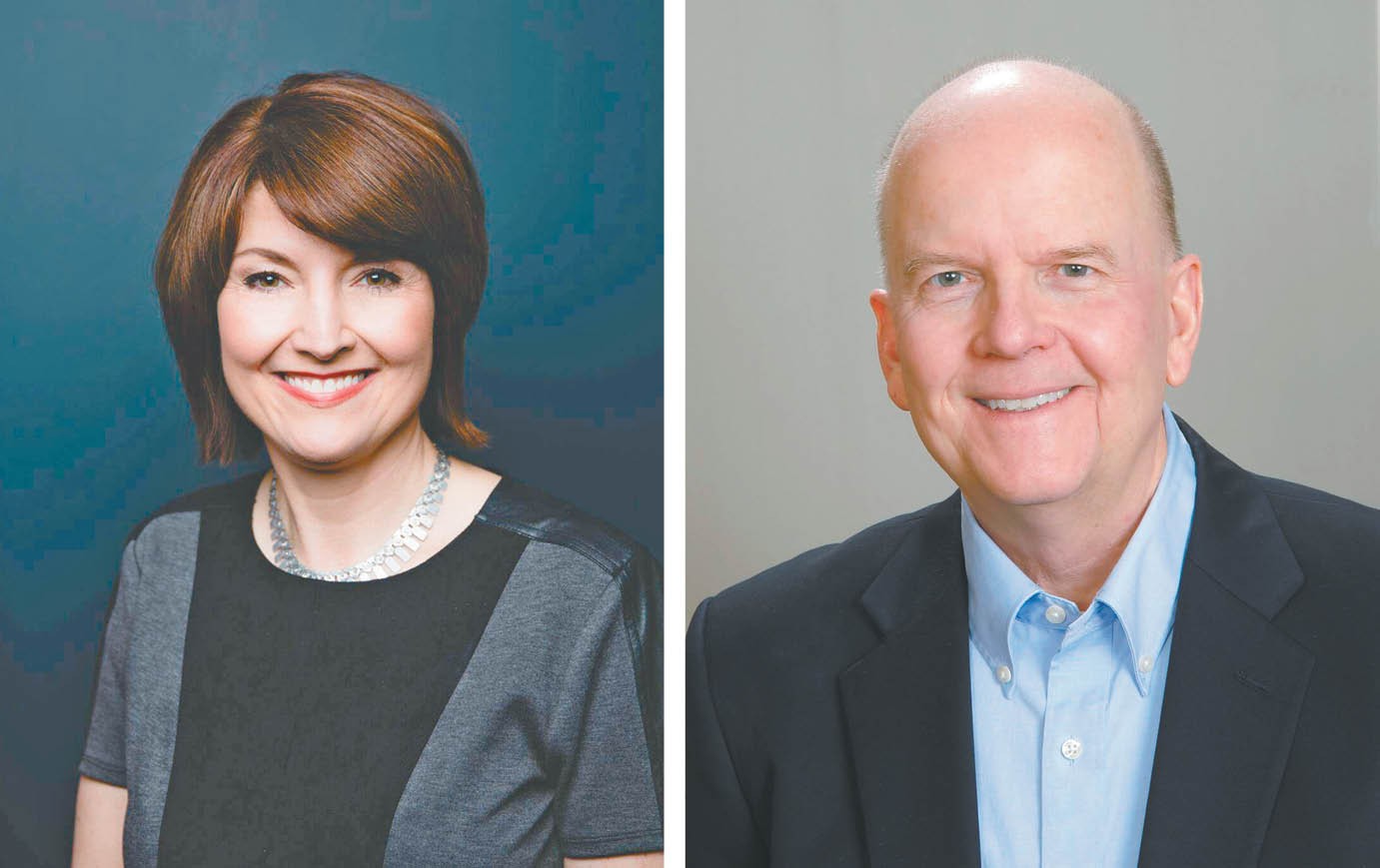 Since then, McMorris Rodgers has shown a brief willingness to defy Trump — opposing Trump's national emergency declaration to build his border wall and his decision to lift some Russian sanctions. But while going up against perennial moderate Democrat Dave Wilson this year, McMorris Rodgers still mostly touts the Trump line, passionately defending the president even as Wilson critiques his record on the pandemic and health care. (DW)

U.S. House, District 1
Russ Fulcher — a former Boise technology company executive and Raul Labrador's conservative successor — came into office embodying the Tea Party, small-government style. Yet when it came time to support a $2.2 million stimulus to save the economy this year, he passionately defended his vote for it. Fulcher remains a staunch Trump supporter, shrugging off concerns about Trump's pressure on Ukraine to investigate Joe Biden.

His Democratic opponent, Rudy Soto, a member of the Shoshone-Bannock tribes and a National Guard vet, is challenging Fulcher on a platform of improving health care. (DW)

U.S. Senate
Idaho Sen. Jim Risch has chaired the Senate Committee on Foreign Relations over the last two years amid investigations into whether Trump colluded with Russia and impeachment hearings over his dealing with Ukraine. But when Risch isn't refusing to answer media questions about Trump, he's remained an unabashed defender of the president.

Risch is running against Paulette Jordan, the former gubernatorial candidate who, despite — or because of — the swarm of national media attention over her potentially becoming the first female Native American governor of Idaho lost the 2020 race by over 21 points. (DW)

Kootenai County Sheriff
In a quintessentially North Idaho development, two of three Kootenai County sheriff's candidates are law enforcement officers who relocated from Southern California — and none of them are Democrats.

Bob Norris, the Republican candidate, retired as a lieutenant in the Los Angeles County Sheriff's Department in 2014, and is endorsed by the union representing Kootenai County deputies and by Janice McGeachin, far-right lieutenant governor.

Mike Bauer, an independent, once investigated white supremacist groups for the Los Angeles County Sheriff's Department and has the endorsement of Spokane Sheriff Ozzie Knezovich.

The final candidate, Libertarian Justin Nagel, is a carpenter with no law enforcement experience, but accuses the Sheriff's Office of corruption, particularly related to his 2016 drunk driving arrest. (The charges against him were dropped.) (DW)