Spokane County Jail inmate's death is eighth in 14 months; another inmate is in the hospital 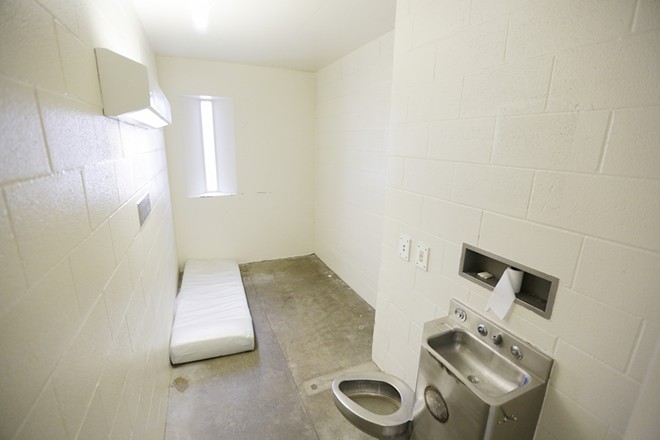 Young Kwak Photo
The inside of a Spokane County Jail cell specifically designed to hold inmates on suicide watch.

A woman was found unresponsive in her Spokane County Jail cell at 5:25 pm Saturday, Spokane County spokesman Jared Webley confirms. She was later pronounced dead at the hospital.

Just hours after the woman was found unresponsive by a corrections officer, between 10:30 and 11 pm, another woman housed nearby was transferred to the hospital due to a "medical emergency," Webley says.

The deceased woman is the eighth person to die in the Spokane County Jail since June 2017 and the seventh in 2018 alone.

Few details were immediately available, including the identities of the two women, the times they were booked and the charges they faced. The deceased woman's identity will be released by the Spokane County Medical Examiner following an autopsy and notification to the next of kin.

The Spokane County Sheriff's Office is investigating the woman's death, as well as the circumstances that sent the second woman to the hospital, Deputy Mark Gregory confirms. The Sheriff's Office oversaw the jail until 2013, at which time the county took over those duties.

In the past 20 years, 18 inmates have died inside the Spokane County Jail, according to news releases and old news reports. That includes the eight people who have died in the facility in the past 14 months. At least three of those people died by suicide. Several of the deaths are suspected to be related to drugs or alcohol, though detectives are waiting on toxicology reports for any official conclusions.

• Brandon Ryans, 41, Christopher Rogers, 24, and Patrick Flynn, 36, hanged themselves with bed sheets in their cells between June 2017 and May 2018. • David Good, 52, a transient man with an alcohol addiction, died in a cell in the jail's booking area this past March. Jail records show that corrections officers were supposed to check on him every 15 minutes, though 32 minutes had elapsed between the last check and when guards noticed he wasn't breathing. • In June, Shane Carson, 31, was found unresponsive in a cell. Sheriff's detectives are still investigating Carson's death. Although initial information from the Sheriff's Office indicated the death could be the result of an assault from his cellmate, detectives have since ruled out that possibility.

In a recent jailhouse interview with the Inlander, Carson's cellmate, Trevor Primeau, said it looked as if Carson was suffering from drug withdrawals. Carson was pronounced dead about 10 hours after he was booked into jail.

• The woman who shared a cell with Cambrea Bishop, 26, who died in the jail in July, described a similar situation. Tanessa Wilturner says Bishop was sick for her first few days behind bars, and didn't eat much. Wilturner says she was talking with Bishop just 40 minutes before Bishop was found unresponsive.

• Christopher Luman died in the jail earlier this month following a fist fight with another inmate. The cellmate, Anthony Weber, is now facing manslaughter charges, the Spokesman-Review reports. Before his death, Luman was sentenced to 90 months in prison for first-degree attempted child rape.

EDITOR'S NOTE: A previous version of this story incorrectly stated that the deceased woman's cellmate was sent to the hospital. In fact, the two women were housed nearby, but in different cells.