NEWS: After sharing speeches by Rep. Matt Shea and Steve McLaughlin that were recorded at a private event, a pro-wolf activist got a legal threat.

NEWS: Three Spokane County inmates were hospitalized after taking an "unknown powdery substance" smuggled into the facility that left them unconscious.

NEWS: Crosswalk teen shelter will be moving out of downtown with some help from the Legislature.

Foam helps put out Airway Heights landfill fire
The Graham Road Landfill had its fourth fire of the year over the weekend, with the cause still under investigation, the Spokesman-Review reports. 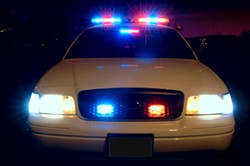 Sheriff's deputy shoots, kills man near homeless camp
The Spokane Sheriff's Office reported that one of their deputies in Spokane Valley shot and killed a man near a homeless camp after he was acting erratically, KXLY reports.

More than 40 killed in fiery plane crash in Russia
A plane engulfed in flames was captured on video as it landed in Moscow, Russia over the weekend, killing at least 41 people on board, CNN reports.

Kentucky Derby horse with 65-to-1 odds wins after first finisher fouled
In a major upset, Country House won the Kentucky Derby after the actual first finisher, Maximum Security, was disqualified from its win due to impeding the progress of another horse while it jumped a puddle during the race, the New York Times reports.