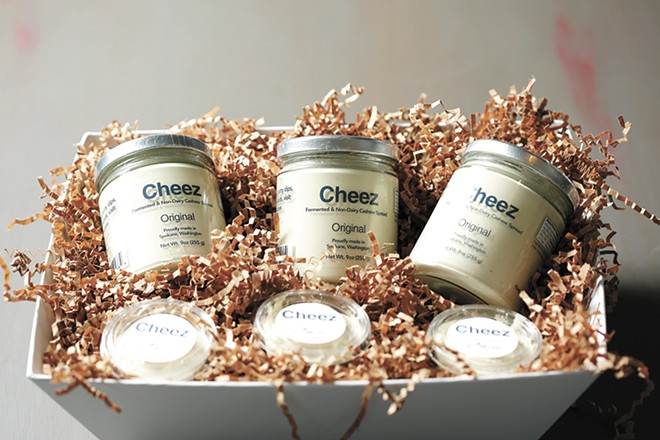 Life without cheese, how does one endure?

It's perhaps the most common question non-vegans have for their friends forgoing all animal-based products, dairy and honey included: How do you get by without the gooey goodness of cheese?

Without getting into the morals and ethics of different diets, the good news for cheese-abstaining vegans is there are many plant-based alternatives, and these products only continue to improve. One of the newest arrivals of plant-based cheese to the consumer market is being developed and produced in Spokane, under the brand name Cheez.

Leo Walters, who formerly ran Glorious Artisan Bakery on downtown's west end, baked his last loaves in the space early this year before shifting focus to develop for commercial production his recipe for plant-based cheese made from cashews.

"I love to bake and continue to do it for family, but commercially I knew I didn't want to do it long term," Walters says.

The origins of Cheez began at the bakery, where Walters often set out samples for customers to try with his bread and the ultra-fresh olive oil and vinegar he also sold there.

"Cheez was one of those things I made on the side for parties and events, and we would set it out with bread samples," he says. "But people would walk in and try it and ask, first, 'What is this?' and 'Can I buy it?'"

"After enough of this happening time and time again, the product spoke for itself," he continues. "So, it made sense to move forward to get it licensed and approved to process, which took about four to five months."

Before it could be marketed to consumers, Walters had to send samples to a U.S. Department of Agriculture lab for rigorous testing and approval.

"They don't have a lot of experience with fermented, plant-based products, so it was a little industry-leading in that aspect," he says. "It was nice to be on the forefront of that, and I've since been able to answer questions for other people looking to do things on a commercial level."

Walters says Cheez most closely resembles a soft, spreadable dairy-based cheese, like goat cheese, and can be used as a dip, sauce, spread or adapted as a recipe substitute in place of traditional cheese.

A practicing vegan for many years now, Walters first made his own fermented cashew cheese about four years ago, and has been experimenting and tweaking his technique since.

"That originated from just wanting to produce some of my own staples — my own milk and butter — and I delved into cheeses so that I would have all those things when I put together food and cooked," he explains.

During the first stage of its 11-day production process, Cheez starts out as sprouted quinoa fermented with a live culture that's later mixed with blended cashews.

As the product ferments, live cultures break down complex starches and carbohydrates, and "in that process it releases natural acids that not only add to the taste and flavor, but develops [traits] that don't require added preservatives to make it shelf stable," Walters explains.

The food science behind Cheez is based on similar chemical reactions that make beer, pickles, yogurt and even naturally leavened sourdough bread.

At this summer's commercial launch of the Cheez brand, Walters introduced three flavors: the base original, salted lemon (soon to begin distribution) and black truffle. He recommends the black truffle for burgers and barbecued foods, and the salted lemon for salads, fish and Mediterranean dishes. Any of these flavors can also be incorporated into recipes or used straight from the jar.

"I love to use it as a condiment on things, so in my salads or on a wrap," Walters notes.

Sold in 9-ounce glass jars for $15-$20, Cheez is available locally at Huckleberry's Natural Market, My Fresh Basket, Rocket Market, Rosauers on 29th Avenue and the Wonder Market on Saturdays from 10 am to 2 pm inside downtown's Wonder Building. Walters says he's also in talks with Method Juice as another Cheez retail location. Eventually, he hopes to have Cheez products sold across the U.S.

"There is a huge demand in the non-dairy industry, and it's only going to keep building in milk and cheese alternatives, so I look forward to more of that expanding and more flavorful options," he says.

For the next several weeks, those looking to sample Cheez can request complimentary 2-ounce cups from the deli counters of the aforementioned grocery stores and at the indoor market. In nonpandemic times, Walters would have set up tables at local grocers to offer samples and chat with people about the product.

Those single-serving samples also inspired another packaging option of boxed four- and eight-packs of the 2-ounce cups, which he hopes to have available soon.

"It will help make Cheez more accessible and provide people with an option to take it on the go by packing a cup in their lunch or taking it with them if they travel or go out to eat," he says. ♦

The original print version of this article was headlined "Cheez, Please"