A fear of death and what may come after drives Amanda Paulson to probe the paranormal. On this ever-evolving quest, the 31-year-old Spokane resident spends her free time delving deep into the secrets of dark places. She's spent nights investigating the seemingly unexplainable at Colfax's 127-year-old St. Ignatius Hospital, the historic Davenport Hotel and famously eerie locales across the U.S. like the Lizzie Borden house in Massachusetts and Waverly Hills Sanitorium in Kentucky.

The ghostly encounters she's experienced at these places, and her preferred methods for paranormal research, Paulson shares with tens of thousands of followers on social media platforms — TikTok, Instagram and YouTube — under her handle prettyfnspooky.

"Definitely a big part of my investigation is to come to terms with my own mortality because I don't want to die," Paulson says. "I want to understand if maybe I could become a ghost in the afterlife, but I'm also known to be a little more skeptical.

"I call myself a paranormal ponderer," she continues, "and I enjoy deep conversations into why it happens. Our perception of paranormal phenomena can change the activity itself."

Paulson's interest in the otherworldly dates back to her early childhood in Montana.

"We lived in a haunted duplex. I remember walking in, and immediately thinking it was haunted. I was just predisposed to the creepy vibe," she recalls.

One day while alone in her room, a vase moved across the dresser on its own.

"It really scared me," she says. "I didn't think, 'Wow, I want to hunt ghosts now,' I thought, 'Wow, this is terrifying.' That was the catalyst for an entire lifetime of paranormal work."

Paulson never forgot that pivotal moment and applied to join a professional ghost-hunting team when she turned 18. With that group she learned how to use popular paranormal investigation tools preferred by modern ghost hunters like thermal cameras and electromagnetic field (EMF) meters to try to detect and communicate with the other side. After moving to Spokane a few years later to escape her hometown of Billings, Paulson began sharing her ghostly interests on her blog, Pretty Fn Spooky (prettyfnspooky.com).

"When I started my blog, it was just to share my love of the paranormal with others, not with the intent of becoming a professional investigator again," she says. "It just started as this creative project, but quickly evolved into me getting back into investigating, and having people reach out to come and investigate businesses and houses. And here I am today, traveling across the country to investigate big locations."

With a collective total of more than 40,000 followers, Paulson has since been able to monetize her content to the extent that Pretty Fn Spooky is a part-time venture in addition to her 9-to-5 job at a local credit union.

"Monetizing the content creation has been great, because that helps supplement my investigations, but investigating and studying the occult, I do that every single day," she says.

Paulson is the subject of a forthcoming 2022 documentary by a Seattle-based filmmaker titled Death Is With Me. She's also shared her insight on podcasts and online publications, and continues to work as a volunteer tour guide at the Northwest Museum of Arts and Culture's Campbell House, located down the block from her own apartment inside a historic building in Browne's Addition. She hopes to see a "dark history" tour she developed for the Campbell House debut next year. Expanding her reach into local history even more, Paulson also serves as the city-at-large representative on the Spokane Historic Preservation Commission. 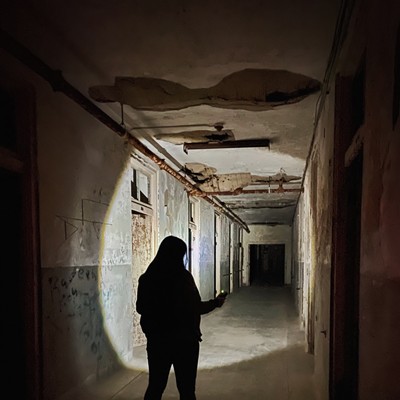 The most scared Paulson's ever been while trying to pull back the thin veil between the living and the dead was during an overnight stay in the infamous Lizzie Borden House in Fall River, Massachusetts. Now a bed-and-breakfast and museum, the two-story home is where Borden's parents were gruesomely murdered with an axe in 1892. Borden was accused of the murder, and later acquitted. This past spring, Paulson found herself completely alone in the 175-year-old house on Easter Sunday.

"I had seen all of the house, and knew no one was there. Then I heard someone walking back and forth above me in the maid's room," she recalls. "I'm trying to rationalize it, and then I hear walking come down the hallway.

"That was the start of an entire night filled with chaos for me," she continues. "I heard a woman's voice in the hallway, and saw weird specks of light and thought I was losing my mind."

Paulson — usually pretty unruffled when witnessing the paranormal — spent the rest of the night in her car.

Locally, she's lent her expertise to several spooked-out residents, including a family whose young son believed a baby blanket made by his recently deceased grandmother was talking to him.

"Some strange things were happening, and the son was really scared to go to bed," Paulson says. "So I'm interviewing them, and 30 minutes into it I feel a hand on the back of my head and I jumped. They looked so scared and I felt so bad! But I was able to give them some comfort and make them feel better about housing a spirit, versus making it leave."

"I heard a woman's voice in the hallway, and saw weird specks of light and thought I was losing my mind."

For her latest investigation, Paulson explored St. Ignatius Hospital in Colfax, a spot embracing its haunted reputation by offering late-night ghost tours for the paranormally curious.

Around midnight, Paulson and a few others were set up in the hospital's most notoriously haunted spot, Rose's Room, that once housed an eldery, mentally ill woman while the building served as an assisted living facility in more recent decades. It was there that Paulson says their equipment (a structured light sensor camera, or SLS, and an audio recording app) began giving signs of a tall figure's presence, and something else unseen with a voice like Rose's.

"We played music and tried to 'lend' some of our energy to the spirits so that they could turn on three flashlights at once, and they eventually did," she says. (A video of this encounter is posted on her Prettyfnspooky TikTok and Instagram.)

Whether you believe in ghosts, want to believe, or don't think they're real at all, Paulson's goal isn't to convince her social media followers to make a firm decision on any side, but rather to nurture that inherent curiosity, as well as her own.

"I definitely ride on the coattails of a handful of really crazy experiences, and that is what keeps me going, because it's rarely like that, and definitely not like on TV shows," she says.

"There is no editing of an eight-hour investigation. It's a lot of boredom, a lot of nothing. And then I think to when I was 7 and saw a vase move across a dresser. I can't ignore that happened. The unexplainable is possible, and I keep chasing it." ♦

The original print version of this article was headlined "Paranormal Ponderings"