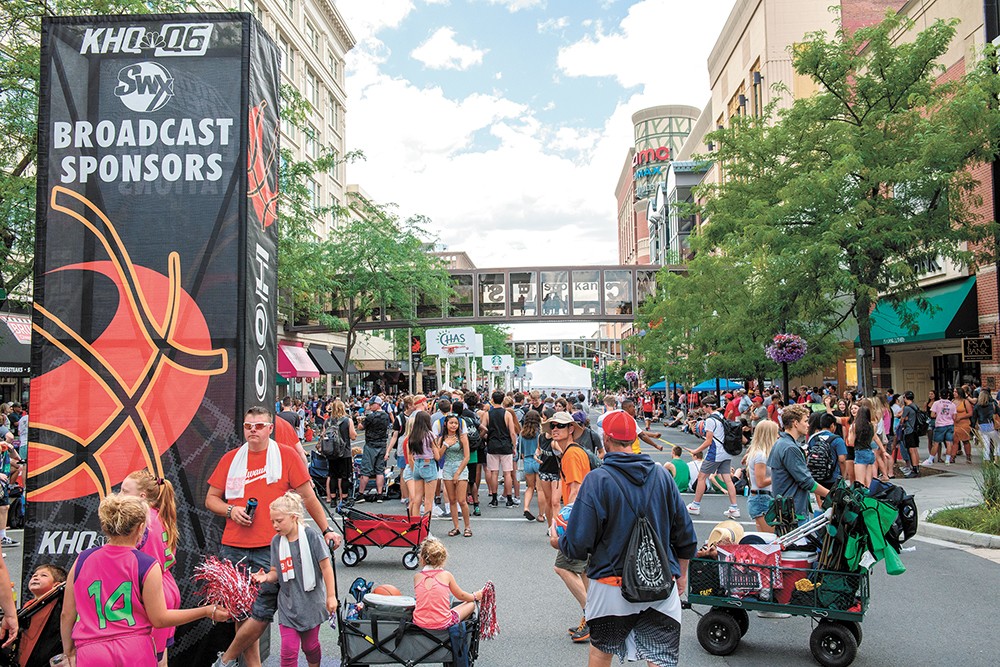 Erick Doxey photo
This year, city officials had considered shouldering an even greater portion of security costs charged to Hoopfest.

Marshall Powell, founder of the now-defunct Elkfest music festival, has a history of sparring with Spokane officials over his event, including a demand last year that he pay for additional off-duty cops to provide security. So when he heard last month that city officials were thinking of paying 65 percent of Hoopfest's security costs, he was pissed — but not surprised.

The news came after Elkfest closed down for good a little over a year ago, partially due to the fact that the city required that organizers cover the entire cost of stationing police officers at the Browne's Addition event. In contrast, under the proposed cost-sharing plan for this year's Hoopfest, the event organizers would've only picked up 35 percent of the tab.

"It's just super frustrating," Powell tells the Inlander by phone. "It's always been a backroom deal and no one knows who gets what.

"We're trying to sell Spokane as a place for young families to move to. Why aren't we promoting events for the people who live here and not just people who aren't from here? The city should be investing some of their resources into local events for local people."

While the Spokane City Council ultimately backed away from paying a larger share — they reverted to the arrangement with Hoopfest from previous years where the city paid 40 percent of costs — the episode highlighted inconsistencies in how public resources are allocated to support events in the city. It's also prompted city officials to try to establish a clear policy on how they dole out money to event organizers for security costs.

"We have a small group that will start talking about policy," says City Council President Ben Stuckart. "We need a policy that is consistent so that we're not making one-off deals with every event in this town."

Currently, there's only one official rule on the books when it comes to providing security for events: Per municipal code, the city is allowed to recover 100 percent of costs for providing police and other public safety resources to events for security purposes, according to Carly Cortright, the city's director of neighborhood and business services.

But that doesn't mean all events pay equally. Aside from Hoopfest, Pig Out in the Park and Bloomsday also receive financial help. Further illustrating the seemingly arbitrary nature of the city's approach to subsidizing some events, taxpayers cover all the security costs for the Lilac Festival's Torchlight Parade.

Stuckart says that those long-standing arrangements have been negotiated by different mayoral administrations and event organizers over the past decade, as opposed to any kind of consistent policy formula.

"Those are one-off agreements that have been signed by various mayors in the past," he says. "We want to have a written policy so there's clarity and it's not being made on a case-by-case basis."

Cortright tells the Inlander that the special arrangements with the bigger, long-standing events have existed for over a decade and are essentially "unofficial" subsidies because city code doesn't explicitly allow them or disallow them.

"We have made exceptions going back to the early 2000s for Bloomsday, Hoopfest, and Pig Out in the Park," she says. "We're recognizing that we need to come up with a more transparent and equitable model."

She adds that the small workgroup of city officials is beginning to explore some kind of coherent approach to event security subsidies.

"Do you recognize economic impact or do you recognize a free community event?" Cortright says. "We also don't want to outprice our signature Spokane events and make it so they can't happen here."

For those event organizers who have benefited from the existing practices, it's all rosy — naturally.

"It's fine. We love working with the police," says Bill Burke, founder of Pig Out in the Park, of the existing cost-sharing arrangement with his event. "It's great for the city to invest."

Representatives from the Lilac Festival — whose security costs are paid entirely by the city — did not respond to a request for comment.

Matt Santangelo, executive director of Hoopfest, says that events like his should be treated differently because of their regional economic impact.

"All events are created equal, but not all events make the same impact," he says. "When you can point to a hard economic impact to the region, that gives you more negotiating power."

While city officials do request that events receiving subsidies for security submit studies of their estimated economic impact to the region, they only started doing so during the past year — and it's ultimately still voluntary, according to Cortright.

Santangelo points to an economic impact study commissioned from Gonzaga University School of Business professor Scott Bozman that found that Hoopfest brought over $47 million to the region in 2018 in attendee spending on transportation, lodging, shopping and food.

Burke with Pig Out in the Park estimates that his event brings in $6.5 million annually but did not provide any supporting data.

"You need to be able to make your case," he says of event organizers looking for subsidies. "If you want some kind of break in costs, you have to open up your books to the city."

While not all special public events that happen in the city require security to get permitted, the ones that do are largely at the whim of the Spokane Police Department, which comes up with the staffing estimates for how many of their off-duty officers would need to be deployed to keep the peace. (Event organizers can ultimately appeal SPD's staffing estimate to the city hearing examiner if the department isn't willing to budge.)

Sgt. John Gately, who coordinates the department's services to special events, says that he personally vets event applications that come in and determines how many off-duty officers — who are paid overtime for event security details — will be required and the resulting financial figure.

"Once I put the plan together, I send it to the organizers and say, 'This is what the costs will be,'" he says. "The larger events, I work with City Hall as far as the traffic impacts."

Powell says that the fact that Elkfest didn't have any special arrangement with the city meant that the security staffing projection from the Police Department made the cost impossible to eat. (He appealed the mandate that Elkfest pay for police security to the city hearing examiner and lost.)

"They just said we had to do it," he says. "We were never offered any discounted rate."

Stuckart, meanwhile, isn't hugely optimistic about the prospects of the city finally getting a concrete policy established on event security cost-sharing despite the renewed effort: "There's no guarantee that this will end up with a policy that gets adopted by anybody because this continually falls out because these are tough questions," he says. "I have talked to at least three mayors personally about the Lilac Festival and charging them and all hell broke loose in their lives."

But in the view of smaller-scale event organizers like Powell, the discrepancy in treatment is actively hurting Spokane's growth as a city: "They're really eager to help those events that have been there forever," he says. "But by doing that they're really missing out on helping the next Hoopfest or Bloomsday." ♦