Spokane is funnier than Seattle, and we have proof 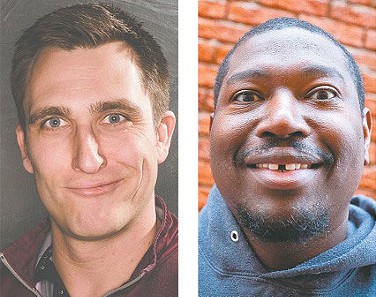 At the beginning of November, we let readers know about the relatively high percentage of Spokane stand-up comedians who made the 32-comic field of the renowned Seattle International Comedy Competition. While hundreds of comedians from around the globe apply to be part of the annual laugh-off, three Spokanites made the 32-comic cut. That's almost 10 percent for you math nerds out there!

As November and the competition approach their conclusions, I'm happy to report that two of the final five joking survivors are Spokane comedians Phillip Kopczynski and Harry J. Riley. That's 40 percent of the finalists from Spokane, people!

Kopczynski and Riley will be competing at five showcases in and around Seattle throughout this week against fellow finalists Drew Dunn from New Hampshire, Landry (yes, just Landry) from Canada, and Bo Johnson from Seattle.

Again, a little more math here: There are twice as many comedians from Spokane in the finals of the Seattle International Comedy Competition as there are comedians from Seattle.

I'm no math major, but I think that means Spokane is at least twice as funny as Seattle.

At the very least, it means Kopczynski and Riley are pretty kickass.