Before she had a driver's license, Chelsey Heidenreich was booking her own concerts, performing as a singer-songwriter in coffeehouses and wineries while her parents ferried her around from gig to gig.

Heidenreich is the new owner of the Pin, the all-ages concert space that's been housed in the upstairs corner of 412 W. Sprague since 2015. When former owner Thomas "TC" Chavez retired earlier this fall, he handed the reins over to Heidenreich, who has been booking shows at the Pin for several years.

Her history of playing in countless venues is a benefit in owning one, she says.

"I've played in a lot of shitty venues," Heidenreich says, "and I think that's a huge advantage. I've also thrown so many shows — and I've thrown so many bad shows. I learned what not to book, what to promote differently."

Along with its new ownership, the Pin also has a new logo and a new staff, and the 299-capacity room is slowly but surely getting a renovation. The Pin has specialized in metal and hip-hop concerts, as well as EDM nights and drag shows, many of which have been products of Heidenreich's Flannel Fox Entertainment booking company.

That approach will continue, with Heidenreich channeling her singer-songwriter roots through regular acoustic shows in the venue's downstairs lounge.

"I've been familiar with this room for a long time," Heidenreich says. "It has a lot of potential. ... It's a good location for music, regardless of what's going on downtown. We're a couple blocks away from the Knitting Factory, the Observatory, the Bartlett — we're right there with everybody else."

The Pin! (the exclamation point has since been done away with) began life as the Cretin Hop in in 2008, an all-ages venue that Chavez, a former Navy recruiter, opened as a place for his kids and their friends to play. It moved to a space on Monroe in 2011, where it was known simply as the Hop, and then to the Sprague location — along with another name change — that had previously housed the music venues A-Club and Club 412.

Heidenreich started working with Chavez then, and when he began considering retirement, he made it clear he'd be handing the reins over to Heidenreich. It was something she had been anticipating for two years, she says, and it became official in October.

She recognizes that the venue comes with something of a reputation.

There was controversy last year when the venue booked New York punk band the Casualties, whose former frontman had been accused of sexually assaulting underage fans. Even though he was no longer a part of the group's touring lineup, there was outrage about the booking online, sparking furor within Spokane's punk scene.

The Pin! stood its ground — its social media page posted a defiant message of "F—- the ignorant, self righteous, band wagoners!" — and a protest show featuring female-fronted local bands happened at Mootsy's the same night that the Casualties hit town.

"That right there was a huge turning point for the Pin in my mind," Heidenreich says. She witnessed all this from the sidelines, and says she never would have booked the Casualties had she been in charge of things. Chavez declined the opportunity to comment for this article.

Now that Heidenreich's in the ownership position, she's looking to change some of the stigma.

"My main thing is making sure that every single show is a good decision on the venue's part."

"A lot of people who were refusing to come in here are back now," Heidenreich says. "I've been here enough and I know who doesn't come in anymore. I've reached out to them and comped tickets. The people that don't want to give it a chance, there's not a whole lot I can do about that."

Growing up in the small town of Ritzville, Heidenreich didn't have much live music at her disposal. A self-taught musician, she toured around the region as a singer-songwriter and as a utility player in bands, eventually starting her booking company at 17 and studying audio engineering in Portland after high school.

"My family's super supportive," Heidenreich says. "Until I could drive, my parents had to drive me all over the place. I was doing all the booking myself, which was scary for them, because they're like, 'What do you mean you booked a show in Boise and we have to drive you there?'" 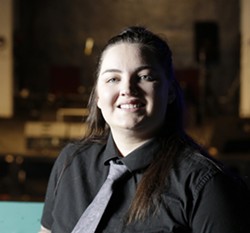 Some of Heidenreich's first bookings were in the space she now oversees, back when it was known as Club 412. Charlie Greer was managing the venue at the time, and Heidenreich was one of several independent bookers to whom Greer would rent the space, allowing them to keep the proceeds from charges at the door.

"She was definitely the youngest one out there trying it," Greer says. "She has a good feel for it. That's a gut instinct thing. I've learned it because I've been doing it for 30-plus years, but she just had it."

"I was lucky if I got 30 people to shows," Heidenreich recalls, "but that's how you learn."

Greer, who is now production manager of the faith-based LMG Concerts, says Heidenreich is an ideal match for her new position.

"She's really approachable and nice, which you have to be to make it in this industry," he says. "But she's also somewhat aggressive. She will go for what she wants. If she thinks she can do it and she wants it, she'll go for it. And you kind of have to have that attitude."

"Charlie could have been a complete dick, but he let me keep going," Heidenreich says. "I got a ton of experience doing it that way."

The cosmetic and structural updates to the Pin include a new barricade that separates the under-21 and alcohol-only segments of the room. The bathrooms have been deep-cleaned, most of the walls have a fresh coat of paint (which is gradually being done in between shows) and they're in the process of updating the sound system.

But Heidenreich says her ultimate goal is to make the Pin what an all-ages venue should be: a safe space for everybody.