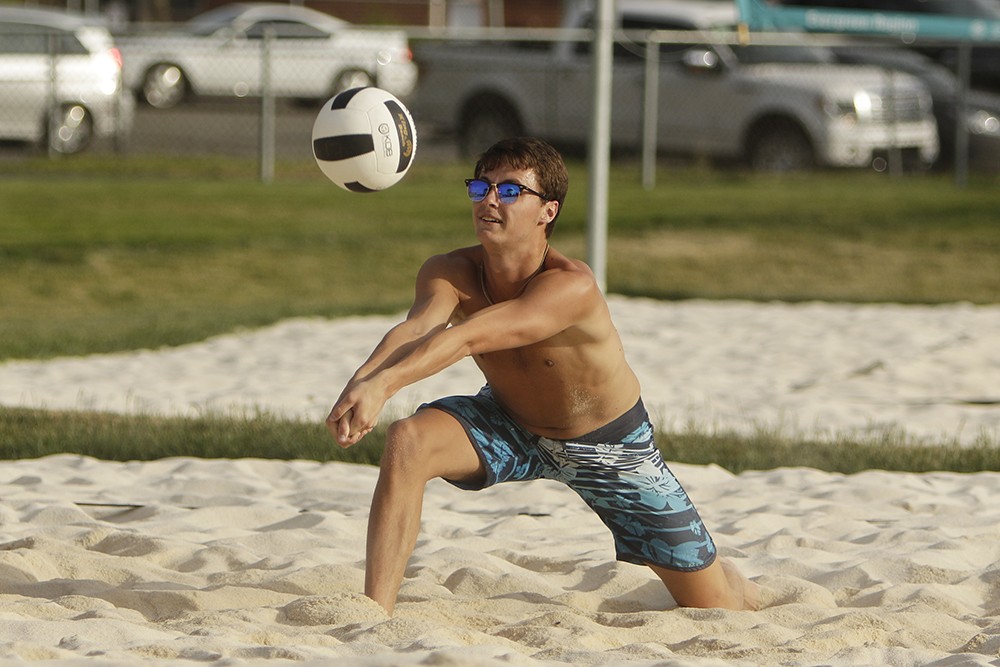 Spokane Parks' volleyball league players love their game more than they fear bad weather. Even when it rains, they're passionate enough about volleyball to keep playing outside.

"Yeah, they had us wait in our cars for 10 minutes and then we came back in. It shows people want to play," league member Bryanna Pavlish says.

The setting sun tinted the few wispy clouds as players took off their shirts in response to some of the first real heat of the summer. A long line of packed courts stretched toward the trees on the edge of the Dwight Merkel Sports Complex.

This year, volleyball has been the fastest-growing adult sports league in Spokane. Right now, the league has 550 indoor players and 190 outdoor ones.

"The number rose by 10 teams since last year," league manager Josh Oakes says. "Volleyball's been pretty popular for quite a number of years now." 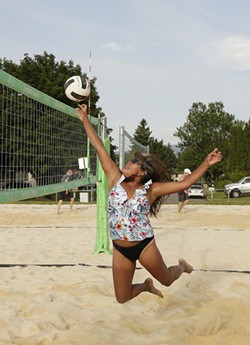 Even with an additional 10 teams, the courts are out on time and neatly organized for the game. The league even has speakers booming out country music.

"The people who organize it have got it down," player Donaye Smith says.

The teams also seem to have it down. They feel casual but competitive. On the whole field, only one team wears a uniform, but every player makes an effort on the court. People sprint for the ball individually or strategically set up a spike for their teammates.

Players from a wide range of backgrounds create the enthusiasm and teamwork that define the league. People of all ages and skill levels play, and many come to the games with family and friends. Many players have stuck with it for years to hang out with friends. Smith has bounced volleyballs over the nets for nine years at the park district.

"There's about 10-15 people here right now that I play with on a regular basis," he says.

While friendships draw some to the league, others love the sport itself. Spokane hosts Spike & Dig, one of the world's largest co-ed six-on-six volleyball tournaments. Every August, up to 315 teams and 2,200 players attend for two exciting days of volleyball.

"I joined to kinda get practice in for Spike & Dig," Darin Debolt says.

For interested players, the Spokane Parks Department hosts an indoor league in the fall, winter and spring as well as a summer outdoor league. You can register teams at https://my.spokanecity.org/recreation/sports/volleyball/ for a fee, and individual players can join as free agents.

Despite being landlocked, beach volleyball is growing more popular in Spokane. The Evergreen Region Volleyball Association (ERVA) has run 16 beach volleyball courts in Browns Park in the Spokane Valley for nearly five years. The ERVA has four adult beach volleyball leagues that last for six weeks of scheduled league play that culminates with a two-week double elimination tournament. People can register for men's or women's doubles as well as co-ed doubles all of which cost $80 per team. Teams can choose from either upper or lower divisions. Upper being players with lots of experience and lower being for people who have a good understanding of the game and are comfortable on the court. League play runs from the beginning of May to the end of June. 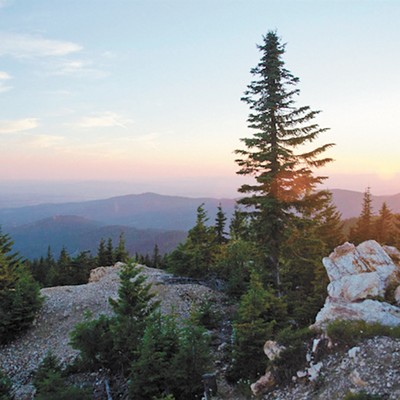