The poem, even the lifelong pull of actually being a poet, comes from some mysterious place.

There was no one poem that inspired Kathryn Smith and sent her on her path, at least not that she recalls. Not a particular teacher in high school, or a poet newly discovered, that gave the 43-year-old an "aha!" moment.

"I did kind of grow up interested in it when I was in high school, and started reading poetry," Smith says. "It was just something I connected with, and that interest and fascination continued, I guess."

That's a bit of an understatement.

Smith's new collection, Self-Portrait with Cephalopod, arrives Feb. 9 via Milkweed Editions, and it's already won a Jake Adam York Prize given to an outstanding first or second collection of poetry. It's a follow-up to her Book of Exodus and her prize-winning chapbook Chosen Companions of the Goblin.

The works in the 88-page Cephalopod veer from intense and disturbing to laugh-out-loud hilarious, as Smith addresses everything from environmental disasters and the natural world to personal loss and celebrity culture as reflected by the media. While the subject matter might sound like it sprawls, the poems collected make it obvious you're reading a distinct voice. And an intense one at that.

Of course, in conversation you'll be talking to a self-effacing self-described introvert her friends know as Kat. Asked about the first poems she ever wrote, Smith laughs and says, "I probably started in high school. We won't be talking about those."

After growing up in Port Angeles, Smith got an English degree from Whitworth and returned to Spokane after a few years in California to pursue poetry and earn her MFA from EWU's creative writing program. She graduated in 2004 "and just kind of stuck around" the area.

One of the poems in Cephalopod was actually written when she was still in grad school; the most recent work is around two years old. The collection's been pulled from a deep well of someone who's been writing consistently for the better part of 20 years (in addition to working in visual arts like embroidery and collages, and crafting handmade journals sold under the name Paper Hermitage).

"Sometimes I don't start with an idea necessarily," Smith says. "I start with a line that comes to me, or I see something and I kind of have that image, and I want to find a way to enter that image. I guess I approach it in a lot of different ways."

Smith's voice comes through in an array of poetry styles in Cephalopod, as she writes about "fur-bound" and "exoskeletal" beasts, ponders "do ants eat worms?" and contemplates "collecting birds battered in the night by creatures bent on malice." She wonders "what good is butter without bread," feeds chickens and gets her hands dirty in her garden, and catches air after a jump on her childhood bicycle, "rising from the saddle as though lifted, weightless, close as I've been to birds when their wings are stretched in flight." 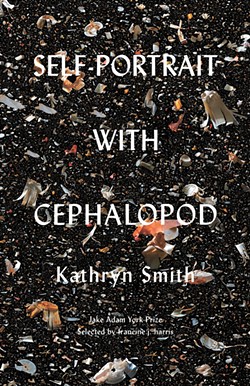 "There are a lot of poets who have kind of a style, and it feels recognizable. It makes a collection feel cohesive in the sense of the style being consistent," Smith says. "I am a poet who writes in a lot of different styles, so finding a way to make all those styles come together in a way that makes sense that the poems are all in the same book, it's a bit of a challenge.

"I think there's kind of a voice that transcends style, to some extent. Even if the styles are different, it still feels like it's coming from the same poet."

There's no doubting the works in Cephalopod are distinctly Smith's voice, whether you're talking about the intense passages of "catastrophes that we witness or the gross stuff that we see," or the lighter side that comes through as well. It helps to have poet friends, Smith says, to read the collection and give notes like, "You have a lot of really long, intense poems all in a row. Do you have something shorter to break it up?"

That makes Cephalopod all the more noteworthy, as its works remain engaging beginning to end, through all that "gross stuff" and sunshine, fear and hope, captured in its pages. ♦

We're both afraid of the brain
deteriorating before the body

and of swimming, or drowning,
which, to me, seems the same.

When I was small, I was certain
that one day the padded wall

of the elementary school gymnasium
would open to flood the room

with chlorinated water. What
made me believe such a thing

would happen? There's a photograph
of me as an infant crawling straight

for the incoming tide. Somewhere
in the few years between, fear

crept in like an insect, so light
you can't feel it until it bites.

She knows deterioration of the body
already, and the brain fog that follows

like an overprotective parent. Love
is knitted there, in the vessel I will wash

with a damp cloth when she is dying.
Will I? I am not tender, impatient

with requests, though I've been known
to bathe an ailing hen, to shoo ants

intent on thieving grubs from a wasp's
fallen nest. Yesterday, I reached a blind

straight into a wasp's stinger. Now
everything I point to is pain. Last time

she called, she asked what she should do
with the stack of music she found

shoved in the hall closet, blooming
with mold. It was her mother's, so she

was sad to lose it, but she didn't know
what she was going to do with it anyway.

The original print version of this article was headlined "Distinct Voice"