Spokane police shot more people in 2017 than they have in decades; almost half were Native

For hours after he was shot by a Spokane Police officer in December 2017, Joshua Spotted Horse's body lay in the street uncovered, handcuffed and shirtless. Passersby took pictures and posted them to social media.

It was the day after Christmas when Spotted Horse became the seventh person shot by Spokane Police in 2017. Following a foot chase, Spotted Horse reached in his waistband when an officer shot and killed him, according to the prosecutor's summary of the incident, though police later determined his hands were empty.

By January, friends and advocates of Spotted Horse gathered to speak at the Police Ombudsman Commission's monthly meeting. They called out the indignity of his body being left uncovered and in public view. They questioned the narrative put forth by police and they described a better side of the man they knew.

Leslie Holt, a longtime friend of Spotted Horse, told the commission of her friend's success as a local high school basketball player. In an interview later she describes a kindhearted man, who cared deeply for his family, but had headed down the wrong path recently.

"Basically, he was pretty much executed. Hopefully we will see that footage, and you guys will see and have more respect for the dead," she told the commission.

But Spotted Horse's death was only the tipping point. Frustration among the Native American community in Spokane has been smoldering for years as part of a larger conversation about Native Americans' contact with police and the criminal justice system.

Toni Lodge, the executive director of the nonprofit NATIVE Project, reminded the five-member commission of a 15-year-old Coeur d'Alene Tribe member who was shot and killed by Spokane Police in 2003. Eagle Michael wore hearing aids and attended the Idaho School for the Deaf and Blind. His body was also left in public view for hours, Lodge says, and then-Chief Roger Bragdon promised his department would order screens to shield the bodies from view. Apparently, that promise wasn't kept. 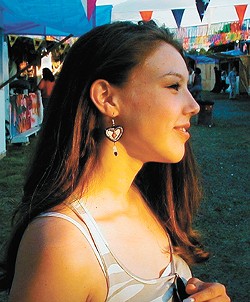 Lodge also pointed to a chilling statistic: Of the seven people shot by Spokane Police officers in 2017, three were Native American. Only one survived.

"That's a flippin' epidemic," she says. "Forty-three percent of the shootings in Spokane were Native Americans. Where is the outrage?"

Spokane Police are hesitant to call the deaths a trend, though they've agreed to open a dialogue with the Native community.

In Spokane, Native Americans make up about 2.5 percent of stops initiated by police, but 9.3 percent of uses of force, according to data analyzed by Eastern Washington University professor Ed Byrnes. Additionally, Spokane County Jail population data indicates for every one white person detained in 2014, 6.2 Native Americans were detained when adjusted for population.

Those who attended a meeting between police and members of the Native community in late January describe it as raw, passionate, emotional.

Lodge tells the Inlander that she was disheartened by reaction from some officers, who she says didn't acknowledge that the number of Native Americans shot represents a problem.

Since 2008, 30 people have been shot by Spokane Police, according to the department's internal stats. Four were Native American, two were African American and 24 were white. The seven people shot by police in 2017 was the most since at least 1995.

Spokane Police Maj. Kevin King, who attended the meeting, says in a subsequent interview that he sees the 2017 numbers as an anomaly. Internal reviews of each of the incidents have so far revealed no racial bias on the part of the officers, he says.

In the first incident, Dexter Dumarce pulled a knife on an officer on the lower South Hill and led police on a foot chase. He was shot and killed as he approached a car stopped at a light.

Terrence Wallette blew through stop signs and almost hit a pedestrian in May when Lt. Dave McCabe stopped him. Earlier that day, Wallette had checked himself into the hospital for a potential overdose of his ADHD medication, police said last week at a news conference announcing the completion of their internal investigation. Confronted by officers, Wallette stabbed himself and screamed at police to shoot him.

Body camera footage appears to show Wallette raise his knife and move toward an officer moments before he's shot.

The third man, Spotted Horse, ran from a getaway vehicle used in an armed robbery of a Safeway. Officers were chasing Spotted Horse on foot when he turned to face them and reached in the front of his pants. Officer Chris Lequire fired four times, killing Spotted Horse.

None of the officers in these incidents will face criminal charges.

As for the meeting with members of the Native community? City Council President Ben Stuckart believes it could have been more constructive.

"One comment I heard was that this is an aberration and in the previous three years, the shooting number was lower, and no Native Americans got shot," he says. "That's the wrong thing to say in relation to that conversation. That doesn't go very far to recognize the hurt and pain in the room."

King, for his part, says that following concerns raised about Spotted Horses' body being left in public view, the department has ordered collapsable shields to keep in patrol cars.

SPD officials have agreed to meet at least twice more with the Native community, and King adds that he hopes more solutions will come. Chief Craig Meidl has also begun collaborating with Bart Logue, the police ombudsman, to revise the department's use-of-force policy.

Lodge is cautiously optimistic. She says the NATIVE Project has proposed a memorandum of understanding that would establish a line of communication between the Native community and police, as well as cultural competency training. She was told the city's legal department advised against it.

"This is a very slow process," Lodge says. "We haven't gotten buy-in. It's a hard job they have, and I admire them for doing it, but I think we need to be more mindful of how we're interacting with each other so this many people don't get shot."

Lodge's plea to the Ombudsman Commission in January, asking "where's the outrage," rings true beyond Spokane. A 30-month nationwide study of media coverage of deaths-by-cop tends to support the notion that major outlets devote less attention to Native Americans' fatal encounters with police.

Consider, for example, the 2014 deaths of a 35-year-old Native American woman in Sandpoint and a black Labrador in Coeur d'Alene and the disparity in media coverage and public outrage first pointed out in a 2015 Guardian article.

Jeanetta Riley was pregnant, suicidal and holding a knife outside Bonner General Hospital. Officers walked toward her, guns drawn, barking orders to drop the knife.

"F—- you!" Riley responded, according to police dashcam footage.

Within 15 seconds of their arrival, two of the officers fired, killing her.

The young children of the 5-foot-tall, woman are suing the Sandpoint Police Department and the officers who shot and killed their mother. Sandpoint Police Chief Corey Coon did not respond to a request for an interview.

Arfee was shot and killed while the 2-year-old dog was inside his owner's van. The dog's death sparked outrage in Coeur d'Alene. Facebook groups demanded justice. Emails from across the country poured into the mayor's office.

About 100 community members marched in 2014 and demanded the officer be fired. Even the internet group Anonymous posted videos threatening the Coeur d'Alene Police Department and demanding a thorough investigation. Media outlets across the country picked up the story.

Riley's death, on the other hand, elicited no such public demonstrations or Facebook groups demanding justice. Beyond the standard regional media coverage, the lethal shooting didn't register as much more than a blip for national outlets. The Inlander published three articles about Arfee and none about Riley.

The Riley case isn't over yet. The officers were cleared of criminal charges in November 2014, but the attorney for Riley's family, April Linscott, says the incident is a horrific example of officers who are too quick to pull the trigger before de-escalating the situation. A federal judge denied the officers' attempt to have a civil lawsuit dismissed.

"While Jeanetta was in relatively close physical proximity to the officers, it is reasonable to infer that this was simply the result of her approaching them on their command," Judge B. Lynn Winmill writes. "In addition, Jeanetta's proximity to the officers resulted in part from their decision to approach her, undercutting any reasonable belief that she posed an immediate threat of harm."

He continues: "The court finds that the defendant officers' use of deadly force was excessive and violated Jeanetta's rights under the Fourth Amendment."

While the discussion continues in Spokane, there has been progress this year at the state level.

Jacqueline Salyers was shot and killed by Tacoma Police officers in 2016. The 32-year-old Puyallup tribal member was with her boyfriend, who was wanted for a felony warrant, when police surrounded their vehicle. Officers say Salyers nearly ran them over when they began firing. She was pronounced dead at the scene.

Salyers' death ignited activism in her mother, Lisa Earl, who is the director of the Puyallup Youth Community Center. In December 2017 Earl delivered more than 350,000 signatures to the Secretary of State's office in support of an initiative to change the state law that made it virtually impossible to charge officers with a crime when they shoot a person in the line of duty. The Puyallup Tribe of Indians contributed $350,000 to the initiative, Earl says.

"Part of it is to help others who are in the same situation and who didn't have any support," Earl says. "If I didn't have my tribal council and tribal nation, it would have gone unnoticed I'm sure."

For decades prosecutors in Washington had to show that cops acted with "malice" in order to criminally charge them in a shooting. The initiative began a conversation with police and led to a new law that removes the malice standard and requires training for tactics such as de-escalation.

Earl says she's not done. The shooting has been ruled justified by prosecutors and a review board, but Earl believes her daughter's death could have been avoided. She's filed a lawsuit against the city and the officer who shot Salyers.

"I'm so happy that we finally have some hope for the future with the initiative," Earl says. "But those officers need to be held accountable." ♦

The original print version of this article was headlined "A Trend or an Anomaly?"