Daniel Walters photo
Spokane Police officers will limit the number of people they arrest and book into jail for minor offenses, like drug possession, in an effort to guard against the spread of COVID-19 in the local inmate population, according to Spokane Police Chief Craig Meidl.

In situations where suspects have only committed minor offenses — like possessing illegal drugs or failing to show up to court — and don't have a history of warrants out for other significant offenses, officers are encouraged to issue summonses requiring that suspects show up to court at a later date, Meidl tells the Inlander.

"If it is only possession of a controlled substance, if it is only that charge, we are directing our officers to issue a summons for that person," he adds. "If it is a drug charge with other charges, it would basically indicate that this person is a threat to the community so we would still book the person despite the drug charge."

A directive outlining the new arrest criteria was issued to the rank-and-file earlier this week, though officers will ultimately still have discretion to determine whether a suspect is an active public safety threat. 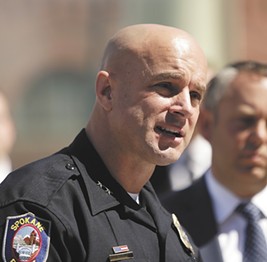 "If [a] person is clearly a repeat offender and a chronic offender and our records show they were just arrested a week ago for a property crime and they have this warrant, that’s something we’ll look more closely at," he says. "This is not open season."

The goal, like the emergency protocols that regional courts have taken to suspend judicial proceedings and release inmates from custody, is to limit the number of people cycling through the already overcrowded Spokane County Jail to prevent the transmission of COVID-19.

"I anticipate [that] our supervisors will also be calling the jail supervisors very regularly and saying, 'Here’s what I have, where are you guys at?' in terms of staffing and jail status in terms of the number of beds open," Meidl says. "It’s going to be that balance out there because we do not want to be introducing people that may have COVID-19 into the jail which is going to create a huge logistical issue for the entire region but we also have to balance that with keeping our community safe."

The shift comes as law enforcement agencies across the country grapple with how to conduct policing amidst a global pandemic. Numerous other police departments have taken similar measures, such as scaling back how frequently officers respond to calls to limit in-person human contact and delaying arrests for low-level offenses. Philadelphia Police have stopped arresting people for narcotics charges, and the police departments in Denver and Boulder have taken similar measures. While the Metropolitan Police Department in the District of Columbia continued to arrest for low-level offenses over the weekend, the department brass recently issued an executive order limiting bookings for misdemeanors and some nonviolent felonies.

Spokane Police officers are also taking other steps to protect themselves and the public from spreading COVID-19. Officers will be using social distancing during nonemergency interactions and will be taking reports over the phone when possible.

"It’s going to take the community to understand that while we’re in the season of COVID-19, things are going to look a little different for awhile," Meidl says. "The dynamics of where we’re at will change the process of how things are handled for a little while."