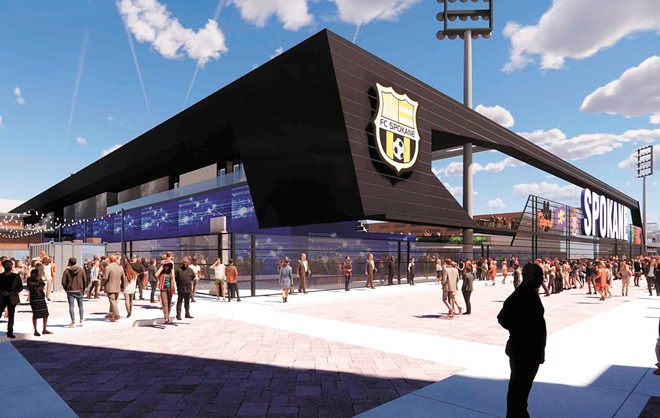 The United Soccer League has given a firm commitment to bring a pro team to Spokane if the stadium is built downtown.

More than three years since the idea was born, the Spokane Public Schools board of directors has agreed in a 4-1 vote to move ahead with building the district's new high school sports stadium downtown.

"I genuinely believe that when all is said and done, that this decision is a step in the right direction to bring Spokane to a better place," says Jerrall Haynes, school board president.

Construction on the stadium, to be located near the Spokane Arena, is expected to begin next spring with a completion date possible by fall 2022, according to information presented by the school district staff Wednesday night.

For Spokane Public Schools, the downtown stadium will replace soon-to-be-demolished Joe Albi Stadium in northwest Spokane. Voters approved $31 million to build a new 5,000-seat stadium for high school sports in 2018 to replace Albi, but in a non-binding advisory vote, voters overwhelmingly said at the time that they preferred the smaller stadium to be built at the Albi site instead of downtown. Many voters at the time were concerned about parking and traffic.

The proposal for a downtown stadium was brought back earlier this year by the Downtown Spokane Partnership, which said the parking concerns had been addressed. Additionally, the United Soccer League has promised to bring a professional soccer team to Spokane if it is built downtown. The USL said it would pitch in an additional $2 million for its construction.

Weeks ago, the Spokane Public Schools board came back with a set of parameters that the Spokane Public Facilities District would need to meet before the school district could move forward with the downtown location. Those parameters included assurances that the school district would retain 100 percent ownership rights, that it would receive $22.5 million in cost savings through the terms of the contract, and that concerns about noise pollution and parking at the nearby Spokane Civic Theatre would be addressed.

On April 30, the PFD agreed to those parameters. The language agreed to by the PFD and the Civic Theatre calls for the school district to partner with the Civic Theatre during design and construction to mitigate noise impact. The district and Downtown Spokane Partnership will also support a capital campaign from the Civic Theatre "to fund facility improvements" preventing noise pollution.

District superintendent Adam Swinyard says the contract with the PFD could end up saving the school district more money than the $22.5 million because the district could use PFD facilities for school events like graduation ceremonies for free. Board member Jenny Slagle says she feels like savings from putting the district downtown will help the school district accomplish its student equity goals.

As part of the agreement with the PFD, the district will also receive a share of all revenue from non-school-related events.


However, board member Nikki Lockwood, the lone "no" vote for the downtown stadium, said she still had questions about the impact to the Spokane Civic Theatre. And she remains skeptical that this agreement addresses the reason voters rejected the proposal in 2018.

"I do wonder if we had a better advisory vote, what that outcome would be," Lockwood says. "Have we addressed the issues that allowed the voters to say 'no' initially?"