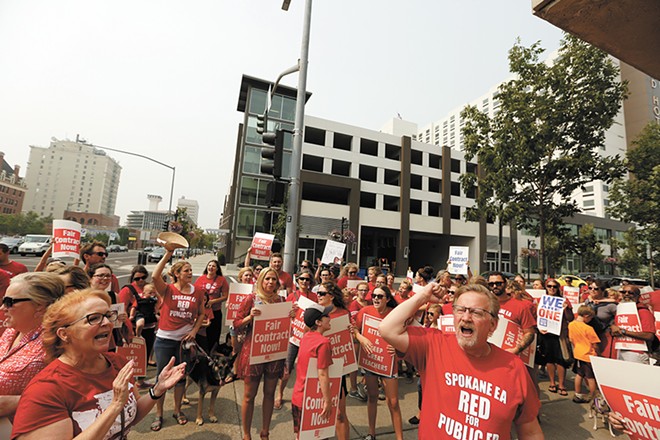 In late August, days before the start of the school year, Spokane teachers were celebrating huge salary hikes in Spokane Public Schools that resulted from an influx of state money put toward education.

Yet last week, less than eight months since the pay raises, 182 teachers were told they would be laid off at the end of the year. The layoffs will affect a total of 325 staff members as the district manages a $31 million budget shortfall. Every librarian in the district received notice that they will lose their jobs.

Superintendent Shelley Redinger has told the Inlander that the district negotiated the salary increases while knowingly facing a budget shortfall because it's important to "pay teachers and staff competitively."

Redinger and union leaders argue that state lawmakers should be the ones to fix the budget gaps.

"Unfortunately, because of changes in state funding, our district is facing budget cuts, including job losses, that will affect our students and staff," a press release from the Spokane Education Association says. "District administrators have been clear these cuts are because of decisions made by legislators in Olympia, not because of the educator salaries we negotiated last summer."

But some lawmakers have pushed back against criticism from districts. Rep. Mike Volz (R-Spokane Valley) said in a statement he was "perplexed" by the district's "outcry over a lack of funding."

"Again, while I disagree with the policies set forth in the 'McCleary-fix' legislation, the bottom line is there is more money being funneled into K-12 education and SPS now than there was before the law was enacted," Volz says.

The added state investment into education last year came with a simultaneous cap on what school districts could collect from local levies. It's meant that districts all over the state face budget deficits even after negotiated pay raises for teachers last year.

It's put added pressure on the Legislature, which is in session and working out potential ways to solve schools' budget problems. But while many districts want the Legislature to lift the local levy cap again, Redinger thinks the funding shouldn't come from local dollars. Spokane voters just approved a major bond, after all.

Rather, district spokesman Brian Coddington tells the Inlander that the district's priorities are that the state fully funds special education, smaller class sizes and new mandates. In the meantime, Spokane Public Schools is planning for the worst.