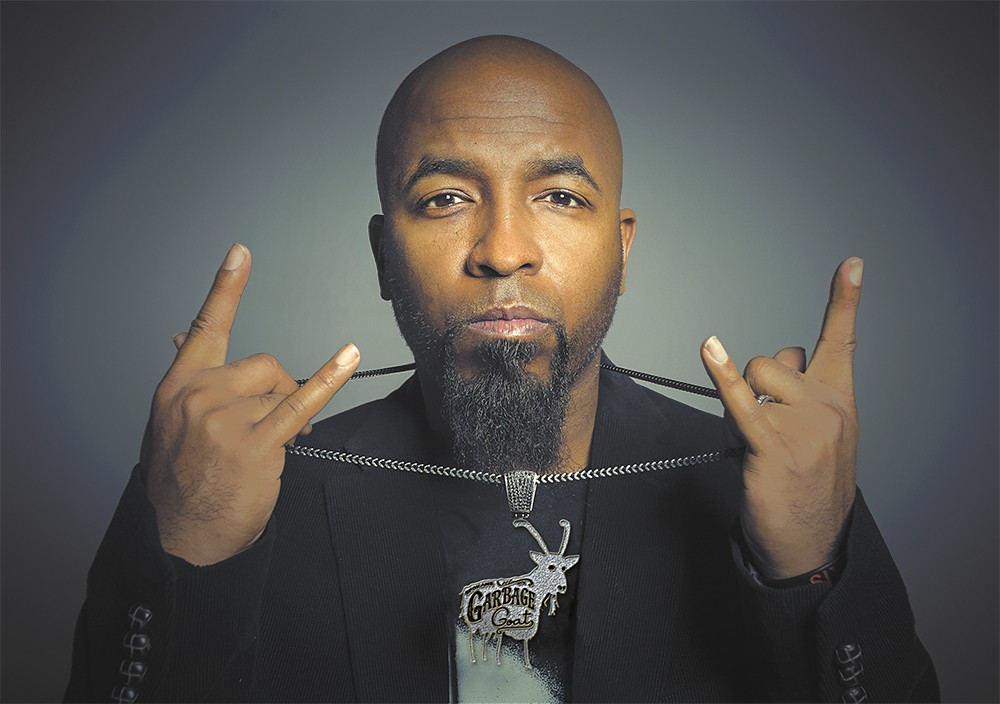 Chris Bovey illustration
No, he doesn't have a Garbage Goat medallion, but he comes to Spokane so often, he probably should.

No one ever expected

much out of Tech N9ne. From his hardscrabble upbringing in Kansas City, where everyone he knew is now dead or in jail, Tech N9ne (aka Aaron Dontez Yates) has clawed his way to hip-hop stardom — show by show, record by record. With no radio hit to speak of, he has traversed the independent rap scene since 1990, working his brand of industrial hip-hop around the world, averaging about 250 shows a year and drawing fans from the Juggalo scene and beyond.

These days he says he's walking on sunshine. Finally, at 43, he's getting recognition from some of the biggest names in the music business. In May, the horrorcore rapper releases his 15th studio album, Special Effects, which include collaborations with Eminem, Lil Wayne, B.o.B., Corey Taylor (of Slipknot) and Hopsin.

"I felt like Rudolph the Red-Nosed Reindeer for so long," says Tech N9ne, who ranked No. 16 on last year's Forbes' Hip-Hop Cash Kings list with a worth of $8 million, although a large portion of his profits come through his Strange Music label.

"And for the most part these artists didn't ask for anything, they just wanted to do music with me, and that's what means the most," he says of his label.

Last Sunday, Tech N9ne is in Santa Cruz, California, getting ready for yet another show. He says he's trying not to sound so tired, but he's hungry and mentally drained. He just finished a meet-and-greet with fans, and his 20-year-old daughter drove up from L.A. to introduce him to her new boyfriend — "I'll be getting to know him better after the show when we sit down for dinner," Tech N9ne says diplomatically.

He's just stepped outside of the music venue, as the loud noises of the sound check aren't conducive to a great interview. Multiple fans catcall him, which prompts him to yell for security. He'd like just a few moments of peace, but on tour that's hardly an option.

In Spokane, where Tech N9ne is scheduled to play Sunday, the scene is similar. He consistently sells out the Knitting Factory, performing there once if not twice a year (like last year). Here in Spokane, he is known — he's even recorded here. And while he loves performing in the Lilac City, it nearly killed him. He often tells the story about a near-death experience on the stretch of I-90 from Billings to Spokane back in 2005.

"Our tour bus rolled five times," Tech N9ne recalls. "It was the scariest moment of my life, but no one was injured. We took some glass out of our face, chartered a plane to Spokane and people there have loved us ever since."

He's thankful for the ability to persevere, he says. This year, he's playing Rockfest in Kansas City, the Gathering of the Juggalos in Ohio and other festivals. He attributes his endurance to always sticking to his guns.

"I've always wanted to have a mixture of gangster and rock in my music," Tech N9ne says. "I chose the right world, I chose to be myself. I never conformed to what others wanted me to sound like. I love rap and rock and metal and jazz, and because of that I'm invited to all kinds of events."

In the spotlight he's mesmerizing to watch, dancing around in white face paint, his lips seemingly moving at the speed of light. His syncopated words regarding bottled-up rage and death inspire and transform people.

"I feel like a superhero on stage, like there's no kryptonite that could stop me," says Tech N9ne, who got his start as a dancer. "Well, maybe women can make me weak, but other than that there's no stopping me. That is my habitat. It's where I belong."

For this upcoming Spokane show in particular, he promises a full band, a set full of fresh songs and "to tear shit down."

And regarding that rumor that he has a house here: "Everybody says that. I used to have a woman up there and I'd stay at her house, but I never had a place in Spokane," Tech N9ne clarifies.

But much too quickly, after a short conversation peppered with the terms "love" and "baby," he has to go. The show is about to begin and there's much to accomplish. He may even try to find some food.