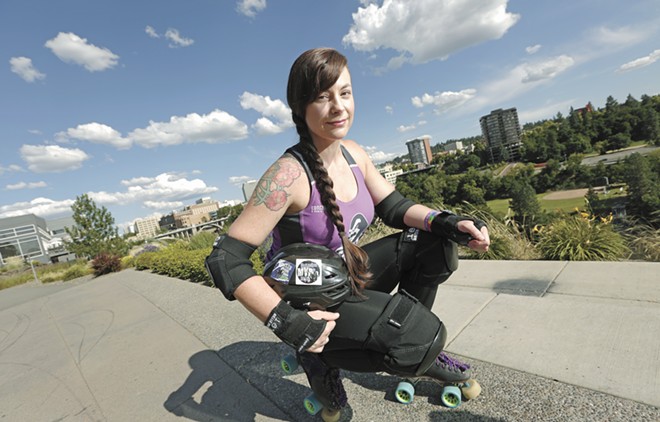 Pippi Headstomping cruises down the Centennial with ease, gracefully kicking pinecones to clear off the trail as she passes. That's no easy feat on roller skates, where you're always one slippery pine needle away from kissing the pavement.

Four wheels come naturally to Pippi, though: she's gone through hundreds of them over her roller derby career. She co-founded the Coeur d'Alene team nine years ago, transferring to Lilac City Roller Derby a few years back. The 38-year-old preschool teacher is a Pacific Northwesterner at heart, hailing from Portland, eventually moving to Idaho, then settling in Spokane about eight years ago.

The newest iteration of the game will be her biggest. Pippi, whose real name is Jada Bellrose, made the roster for Jewish Roller Derby, the first-ever team of its kind. They debut at this year's RollerCon, the largest derby convention in the world, taking place mid-July in Las Vegas.

Skaters from around the United States submitted applications, including audition videos, and Pippi made the final roster of 18, a special number in Judaism that represents good luck.

While this is her seventh time at RollerCon, this year marks a special moment in her derby career.

She says because it's hard to tell if someone is Jewish — "unless they have a huge Star of David necklace or a funny shirt that says 'Challah!' [holla!] with a loaf of challah bread," she jokes — she had never connected with another Jewish skater before.

The team has opened doors in roller derby that Pippi never thought possible. While she's part of a tight-knit derby community in Spokane, she doesn't know many Jewish people.

"I instantly got invited to come over for Shabbat dinner in Portland. It might seem small, but I don't have that here in my local community," she says. "I'm finding this community where I'm accepted and where they're all these different types of Jewishness all coming together. It's empowering and exciting."

While she hasn't experienced any anti-Semitism in the sport, Pippi has definitely felt the sting in her life. She says that's one of the reasons this team has felt so important to her.

"I wasn't bat mitzvahed, I didn't go to Hebrew school, I didn't do the traditional things that young Jewish kids do," she says. "But I was still raised celebrating many of the high holidays, eating Jewish food, and listening to klezmer music. So I didn't fit into the overwhelmingly white Christian populous in Beaverton and I was bullied as a child."

Her experiences of anti-Semitism have continued well past childhood. She says although it can be scary, the team has provided a haven for that part of her identity.

"There are many times in my life where I have been afraid to be Jewish in a situation," she says. "I would not wear a Star of David, or if I had, I would cover it. With what appears to be bigotry on the rise, or at least getting louder, it feels so amazing to be part of a group where you feel completely safe."

Her mother was raised in Squirrel Hill, the Pittsburgh neighborhood where the 2018 synagogue shooting took place, the deadliest in American Jewish history. Her maternal grandmother had converted to Judaism as a war bride, which led Pippi's mother to grapple with a sense of being "Jewish enough".

"[My mom] was trying to empower us to feel like, we are who we are: we get to claim that Jewishness," she says. "As an adult navigating that, how do I express that? I'm not religious, but I am Jewish. How do I live that? What traditions do I want to keep?"

Co-founder Tiggz, a Rose City skater out of Portland, says the new derby team has brought together players like Pippi who have a wide swath of Jewish identities.

"There are some people who are super religious, maybe raised Orthodox, to people who are ethnically Jewish, but didn't have a super-Jewish upbringing," she says. "A lot of us tend to have a different experience and it's been really nice to connect with people so that you don't feel alone."

Tiggz came up with the idea when she skated for the 2018 World Cup. She skated with Team Russia but also watched Team Israel.

"I was looking around and said, these are my people. I don't have any ties to Israel, that's not my country," she says. "But seeing people who look like me, playing the sport, was really neat."

When she returned from the World Cup, she approached her Jewish teammate Jodi Bon Jodi about networking with other Jewish players. They started a Facebook group, which snowballed into the RollerCon team.

Pippi says this team is about more than playing roller derby. She wants it to bring visibility to Judaism, both on and off the track.

"It feels incredibly important to be seen and heard as a Jewish group or individual. It feels like it needs to happen now, at this time," Pippi says. "There's a shocking amount of ignorance regarding anti-Semitism that I see online. [The team helps] being present, being visible, and helping educate others who have questions about Judaism or what our experiences are like." ♦