Our Best Of issue shares the strengths and weaknesses of American democracy.

On the one hand, the will of the voters, no matter how capricious their whims, is honored. On the other hand, it means that your most hilarious, write-in joke votes go unappreciated. Until now.

Frankly, this is unfair. The reported property crime rate in Compton, California, is less than a third the rate of Spokane, and it's not right to tar Compton with Spokane's problems. To give the readers credit, maybe the portmanteau is more about giving credit to Spokane's racial diversity and iconic place in hip-hop history.

Other voters gave nods to marmots, mullets, "40-Year-Old BMX Bike Riders," and "Guys Who Don't Wear Shirts When It's 65-Degrees Out."

And despite the fact that the city has in recent years veered away from its tradition of "buying local" when it comes to purchasing methamphetamine, Spokane's loyal love for the classic narcotic still brought in plenty of votes for best local stereotype.

A few tapped into the region's political conservatives, with one reader channeling 2016 Trump Endorsement Poetry Slam Champion Sarah Palin to suggest "Right Wingin', Bitter Clingin', Proud Clingers of Our Guns Our God and Our Religion" as their favorite local stereotype.

At least one voter cited "Rachel Dolezal" as their favorite stereotype, which we think might be racist, but we're not really sure.

Presumably, voters were drawing on Spokane's Police Leadership Advisory Council's recommendations that "folksy charm" and "skill at whistlin' a tune" were the most important qualifications for the next police chief. The choice is reminiscent of my favorite Andy Griffith Show episode, when Otis the drunk gets fired from Mayberry's Sheriff's Department for getting a DUI, then sues the county for violating the American Disabilities Act.

"Al Swearengen from Deadwood: He understands corruption, but also how to keep a town running" is a fine alternate suggestion. Alas, Mr. Swearengen is also fond of a certain unprintable word that former Spokane Police Chief Frank Straub has also been alleged to use.

While one voter suggested hiring "Bartleby the Scrivener," we asked him if he'd be willing to do the job, and he said he preferred not to. Another voter wrote in Better Call Saul. Not the sleazy lawyer Saul Goodman, mind you, but the title of the TV show he's in. Make Die Hard and Miami Vice his lieutenants, and you've got yourself a deal. 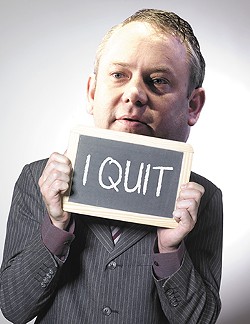 One of the campaign slogans that readers suggested for Mayor Condon: "I quit."

It's counterintuitive, but a clever bit of reverse psychology. Once Condon is gone, the ungrateful masses will come to crave his data-driven approach to long-term, fiscally sound budgetary management and cross-departmental vertical restructuralization. And then all the reporters and Facebook commenters will look up and shout "Leverage existing efficiencies to shift our municipal paradigm!"... and Condon will look down and whisper, "No."

Others aimed to counter the notion that Condon's administration has been weak in addressing sexual harassment claims.

"From now on all sexual misconduct allegations will be handled with the gravity they deserve, we promise," one wrote. But we prefer the catchier suggestion: "More Kicking Butt, Less Grabbing It."

A few voters channeled their inner attorneys and thought it would be best to take a more evasive approach to sloganeering. "I have no comment at this time," one wrote. Another, echoing a famous quote from one of Condon's former appointees, went with "I don't understand the question."

But the best way to trick the ravenous media? Distract it. One voter, clearly a master of crisis management, pitched the slogan, "Near Nurture; Near Purrrfect," captioning a picture of the mayor holding kittens. Put that poster all over the town, and watch his approval rating skyrocket.

Best Excuse for Not Shoveling Your Driveway

IT WILL MELT ANYWAY. WHY BOTHER?

Time is fleeting. Man is mortal. Life is but a flash of insignificance, unseen in the infinite, uncaring void. Instead of raging against the elements, embrace the meaningless. Close your eyes, release your ambitions and let entropy carry you from birth toward inevitable death. And now, in sunny March, the lazy grasshopper has been proved wiser than the hard-working ant.

A trio of voters gave excuses for every stage of adulthood: "Having sex," "have little kids" and "having a heart attack."

Claiming that shoveling would be "harmful to endangered driveway lemur habitat" is a persuasive excuse, though perhaps your Subaru barreling over the lemur habitat every morning is the bigger problem. "Your roommate's cat peed in the snow and you want people to think it's your pee," meanwhile, is a less persuasive excuse.

And for the record, "double amputee" is technically two excuses, by our count.

Best Use for the Old Macy's Space Downtown

We bet that's how Spokane City Council President Ben Stuckart voted. It is, after all, literally his plan for the property. Dozens of other voters, meanwhile, wanted the city to turn the centrally located spot into a homeless shelter, an idea we expect to be fervently endorsed by the downtown business community.

Plenty of voters wanted a Cheesecake Factory, bringing back the cheesecake manufacturing jobs that Spokane lost after Kaiser Pastries closed. Others pushed for the city to rely on cryptic diagrams to assemble an IKEA in the space. One armchair urban planner suggested getting rid of Macy's in order to bring in a "damn better Macy's."

While one voter dreamed of turning the space into "a large Zips," implying an entire floor dedicated simply to fry sauce, another pitched the idea of a "Suction Goat Rehabilitation Clinic." It's unclear whether the clinic would rehabilitate suction goats, use vacuum-powered goat therapy to help athletes recover from injuries, or address the city's growing epidemic of garbage-eating-goat addiction.

It's a bold statement for, if not civic pride, civic adequacy. The underlying message of this sticker: "Everyone knows that Spokane sucks. What this bumper sticker presupposes is... maybe it doesn't."

One voter had the gall to submit "Mudflap Girl, fully clothed, reading a book." First of all, her name isn't "Mudflap Girl." It's Katelyn, and she's only appearing on mudflaps to pay for law school, so she doesn't need your judgment right now. The car with the "Bigfoot Doesn't Believe In You Either" sticker, meanwhile, is presumably owned by local author Sharma Shields.

Another sticker reads: "My other car is a marmot-drawn carriage." Until, presumably, the clock tower strikes midnight, the carriage turns back into a huckleberry, the gown turns back into a ratty Bloomsday T-shirt, and the charming bro you danced with at the Globe bar begins searching for the owner of the single Birkenstock you left behind.

Several voters also cited the window decal of a T-Rex saying "your stick family was delicious." Don't you see?! You bumper-sticker artists were so preoccupied with whether or not you could give a life to a dinosaur window decal, you didn't stop to think if you should. ♦