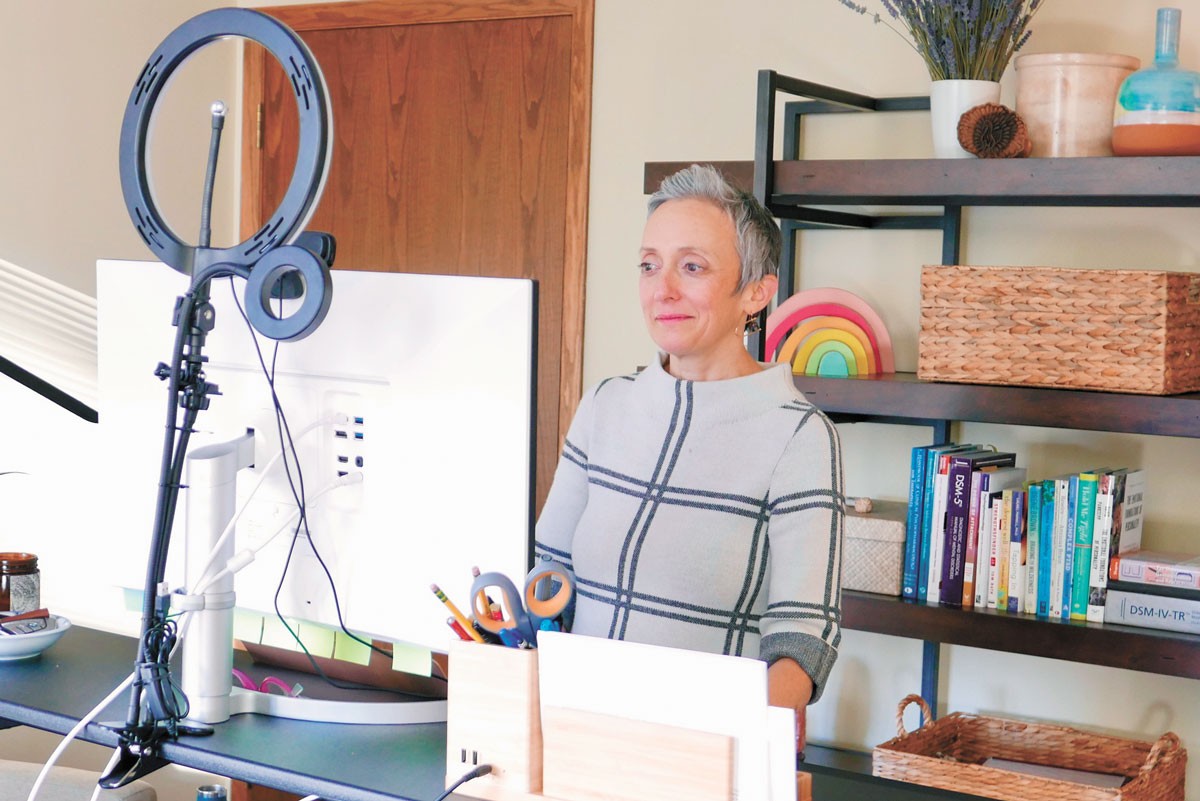 It's hard to live in survival mode for prolonged periods of a few weeks or months.

It's even harder when you've been living that way for almost a year, with no end in sight, says Meg Curtin Rey-Bear, a licensed mental health therapist who opened Wellness Therapies mental health clinic last year with a colleague.

"When we're in this event that has already taken nine months and is expected to take many months more, I think we can feel pretty overwhelmed by that and then frustrated we don't have the control we'd like," Curtin Rey-Bear says.

The global pandemic has dramatically increased the need for mental health treatment, as many people are newly experiencing anxiety and depression, and as those who already had mental health issues are struggling even more.

School districts are offering a wealth of counseling resources and can help your student.

"This was a radical change for people in society and how we live," she says. "There was a fear of the unknown: 'What will happen to me and my family, and how we interact day to day?'"

It's hard to quantify the increase in sleep issues, since clinics largely switched to telemedicine this spring before again taking patients in person, but anecdotally, she's confident the problem has increased and expects these sleep issues to continue for quite some time.

Globally and nationwide, increased need is evident. A Kaiser Family Foundation poll this summer found that one in three American adults reported symptoms of anxiety or depression, compared with one in 10 over the same time last year.

Locally, Curtin Rey-Bear says the plan was always to grow Wellness Therapies over time, but she and her colleagues didn't expect to more than double their staff within a year of opening to help meet community needs.

"When we opened in July 2019, there were three of us," she says. "As of September we are now seven therapists ... and quite frankly, it's not enough."

A full-time therapist is limited to maybe 28 to 32 patients a week at the very most, she says, when accounting for other work that needs to be done.

Needs run the gamut. Some people are drinking or using drugs more often. Health and cognition is waning for some elderly people as they remain isolated. Kids and teenagers are struggling with remote learning as they look toward an uncertain future. Relationships are strained. Meanwhile, the caregivers, teachers, doctors and health care workers we lean on are exhausted.

While the current state of mental health is serious, there are things people can do to help themselves, family and friends, starting with giving themselves some slack, Curtin Rey-Bear says. And while resources may be tough to access at times, they are available.

STRUGGLING STUDENTS
Nobody's been doing very well this year, but clinical social worker Maggie Rowe, who also works at Wellness Therapies, says her phone has been ringing off the hook with requests to put children and young people on her waitlist.

School routines are important for many children, and teachers have been trying their best to create a new sense of normalcy, she says. But depending on their circumstances, some children weren't able to pick up the new routines as easily.

Some parents who'd let homework and class attendance slide this spring have struggled to get their kids back into the swing of things this fall.

Many students are missing out on forming and keeping up friendships, and for some kids who rely on positive adult interactions outside their home — through athletics, clubs and school — that support is missing right now, Rowe says.

"I keep seeing that again and again in my own kids and the kids I see here: They're just needing so much more connection from their parents, sometimes more than their parents can give," Rowe says.

But even parents dealing with their own exhaustion and struggles can help by trying to say yes when their child asks to do something like play a game, or even by actively watching a movie they pick, without looking at your phone the whole time, she says.

"The kids I counsel, a lot of them are just so lonely for that attention, just wanting somebody to spend some time right in their vicinity, even just coloring together," she says. "It makes kids feel so special."

Teens may reach out in subtler ways to talk, and it's more common for them to feel invalidated by parents.

"Most of the things they report to me are not like outright rude things their parents are saying, they're just little. Like they say, 'I'm overwhelmed with school' and the parents say, 'Just do it one thing at a time — that's what I do,'" Rowe says. "That seems reasonable, but sometimes now we're missing these little clues that my kid is really trying to talk to me even when they're tough teenagers and isolating themselves."

WHAT YOU CAN DO
When we're not coping with stress, anxiety or depression very well, we can sometimes beat ourselves up for that, Curtin Rey-Bear says, but give yourself some grace.

"This is really hard work," she says.

With extra stress hormones dumping into our systems as we move back and forth in reopening phases and struggle for a sense of control, our central nervous system is taxed, she says.

Just like on an airplane, she says, you should put on your metaphorical oxygen mask first.

"There's a reason you can't go help everyone else first," Curtin Rey-Bear says. "We're going to be the best at being generous with ourselves and others if we are getting enough rest, recharging our batteries, emptying our emotional container, taking those breaks."

It's OK to not be OK, and it's OK to be fine, too, she notes. Some have struggled to enjoy their own happiness as so many others have been negatively affected this year.

For those struggling, mindfulness may help, with a gentle reminder that we can't change the past that got us here, and it doesn't do much good worrying about the future, she says.

To help manage anxiety, sleep and the dark days of winter, it's good to get up and move or exercise, avoid too much screen time, call a friend and do small acts of kindness like taking in your neighbor's garbage can from the street, she says.

"Even waving from across the street, those types of things remind us we're connected," Curtin Rey-Bear says.

Of course, if you're having a hard time, reach out to a therapist. She advises people to be persistent, even if it's hard to find someone accepting new patients or who takes your insurance at first.

Unfortunately, people who may have lost income and insurance due to the pandemic could be the hardest hit when it comes to finding professional help, she says. Many therapists will take people without insurance, but the price may be too high, while other providers take a set number of people on state and federal health care plans but rarely have openings for those spots.

"It breaks my heart to know how many people are out there struggling right now that we can't meet," Curtin Rey-Bear says. "I want people to reach out. I don't want them to think, 'There's no help for me.' But ultimately we're in a mental health crisis, and we're running out of [emergency equipment] — in this case, therapists."

But with so many people needing help this year, it may drive conversations on how to improve care everywhere.

"There's a part of me that is excited by the idea that this pandemic has pushed and will continue to push mental health into the spotlight," Curtin Rey-Bear says. "As we enter into a reconstruction phase, one of the most important elements will be healing our mental health." ♦