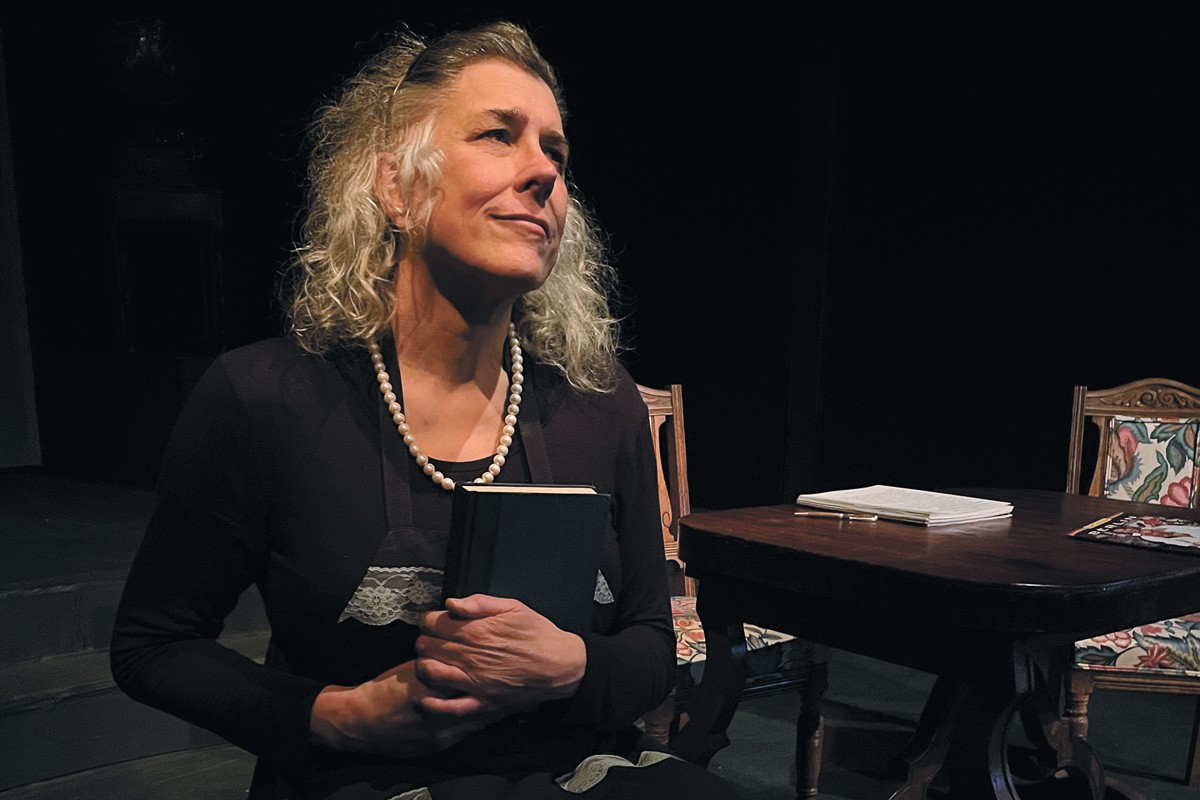 Returning to the stage after decades away takes guts — especially if your debut is not just one but 30 parts in a one-woman show.

Fortunately, Spokane actress Maeve Griffith shares courage and an uncommon connection with one of the 30 characters she portrays in Stage Left Theater's new production, I Am My Own Wife.

"The courage of Charlotte is really compelling, which underscores as a trans woman how desperate you are," Griffith says. "You want to show who you are, but most of us hide it to fit in. But Charlotte didn't.

As a part of Stage Left's series of one-person shows, this filmed production of the Doug Wright play is challenging Griffith — a veteran, retired fire captain and trans woman — with its multitude of roles. The play tells the true story of Charlotte von Mahlsdorf, a transgender woman and German antiquarian who survived the Nazi onslaught as well as the repressive East German Communist regime in Berlin.

"It's an amazing story, and adding Maeve to the story makes it even better," says Troy Nickerson, the play's director. "She has such an amazing story — sometimes I wonder which story is more amazing. But having some firsthand connection to that has been a powerful thing, as a really new actress to be put into a one-woman show playing 30-plus characters."

In fact, Griffith has little experience acting and is returning to the stage after many years away.

"I was in productions in grade school and junior high, but I got tired of getting beaten up so I decided to forgo the theatrical experience and become more of an athlete," Griffith says. "Until three or four years ago when I was in the Vagina Monologues and it was such a wonderful experience. Working together on a common goal with people was amazing, and I forgot how much I really enjoyed the theater."

According to Griffith, Stage Left Artistic Director Jeremy Whittington was the one who came up with doing I Am My Own Wife and had her in mind to perform it.

"I hemmed and hawed, but he told me he would help, and I figured as a trans woman I should probably grab any role I can," Griffith says.

Griffith started her first read-through in February, and although she has never been in a one-woman show before, she was equipped for the challenge.

"At first, it wasn't directing her as much as it was teaching the craft of acting," Nickerson says. "Once the ball got rolling, she started digging into it. Her natural gifts are really right on, and she's really bright, so that helped. We just jumped in, and she was just really fearless, and I don't think I could have done that."

Wright wrote I Am My Own Wife based on conversations and interviews with Charlotte von Mahlsdorf as well as on excerpts from her autobiography. The play follows Charlotte, born Lothar Berfelde, from her youth, when she killed her abusive father, to adulthood, when she narrowly escaped the Nazi regime. Once WWII ended, Charlotte ended up in East Germany, where she became a well-known antiquities dealer.

As she talks about all the work that goes into accurately portraying 30 completely different characters, Griffith says "my voice is shot" but proceeds to showcase her vocal range with a great ease.

"When I was a kid, I loved doing voices," Griffith says. "I used to put together a little routine where I was Lily Tomlin calling different celebrities in sixth grade. I'm not as good as when I was little, but I'm still pretty good."

With the ability to access all of these different characters, it's hard for Griffith to choose a specific favorite, but she considers the fan favorite Alfred Kirschner.

"He's Charlotte's boyfriend, or at least a colleague," Griffith says. "He gets sent to prison for dealing clocks contraband to American soldiers who come to Berlin. There's a lot of evidence that Charlotte sent him to prison. He is a very funny and sympathetic character. I like him a lot, and I would hang out with him."

When Griffith is not busy on stage, she is living a retired life full of activities.

"I love to paint — I do a lot of paintings, and that's probably my main thing at the moment," Griffith says. "I started doing some sculpture work and gardening. My tomato plants are probably a foot high. Every Friday for the past few years I've been doing Haiku Fridays, where people send me their haikus and I just read them on Facebook Live. It's one of those things I started doing and just can't get out of the routine of it."

This is just the beginning of Griffith's return to the stage; she's already looking to her future as an actress.

"I hope to do more stuff. I could easily play a man, or if I try really hard I could play a cis woman," Griffith says. "If I see a part I want to try out for, I think I'm going to do it. I kid my wife with getting a camper and staging I Am My Own Wife on the road. I could perform, and she could do the lights."

The things she thinks audiences will really gravitate toward in I Am My Own Wife, Griffith says, are the relationships portrayed on stage.

"It's a lot about relationships, and there's a beauty about them as well," Griffith says. "I think it will have people talking about what really went on. And people can see what a really good director and crew can do with someone who doesn't have very much experience." ♦