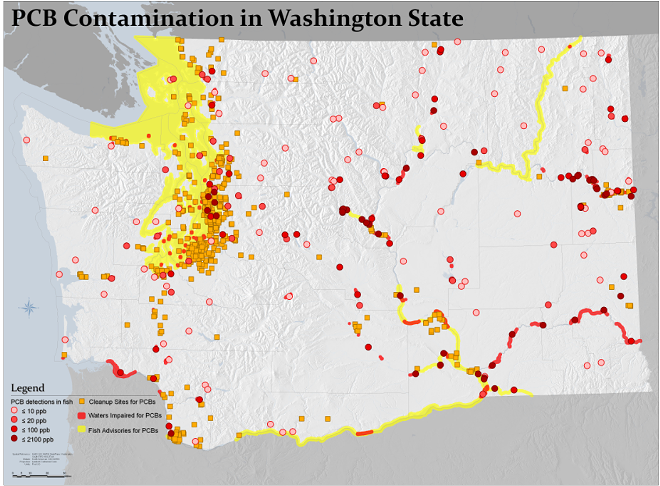 Thursday, lawsuits by both Washington state and a class action group of cities and communities co-led by the City of Spokane announced proposed settlements with chemical manufacturer Monsanto that will provide millions for remediation and cleanup efforts.

Spokane was one of 13 named cities and local governments around the country that led the way on a class action lawsuit to recover money to pay for the cleanup and long-term remediation of polychlorinated biphenyls (PCBs), which are persistent in the environment and toxic to fish and people. The settlement comes after five years of action in court.

“This national resolution will provide more than 2,500 local communities funds for monitoring, mitigation, and remediation efforts to manage PCBs in stormwater, stormwater systems, sediments, and water bodies,” Spokane Mayor Nadine Woodward says in a news release. “The Spokane River is a precious regional asset, and the City has been proud to lead efforts to protect it and to protect waters throughout the state and nation.”

The city expects it will receive several million dollars from the settlement, but the overall settlement and divvying up of funds could take several months to be finalized, says city spokeswoman Marlene Feist. It's likely that other local governments will fall into that group of 2,500 who will be eligible for money from the settlement, she says.

"It’s a way to help pay for projects that our citizens really would've been on the hook for," Feist says. "My anticipation would be it would go for future stormwater projects going forward that would help mitigate PCBs."

Monsanto manufactured the chemicals from the 1930s to the 1970s, but they persist in paints, oils, and other household materials, and leach into stormwater and the Spokane River, accumulating in fish and affecting overall river health.

Monsanto higher ups knew in the '50s and '60s that PCBs were toxic, causing harm to fish and birds and affecting human food supplies. Yet internal documents obtained over decades of litigation by different groups show that the company willfully opted to continue profiting from the production of the chemicals until they were forced to stop, as documented in the Poison Papers.

That's partly the basis for the lawsuit filed by the cities and Washington state, which also announced a settlement Wednesday.

Washington Attorney General Bob Ferguson announced a settlement of $95 million, which will be paid within 60 days, and of which at least $60 million will go into the state General Fund.

It marks the state's largest ever independent environmental win against a single company.

"In 2016 Washington was the first state to file a lawsuit against Monsanto over its PCBs, asserting that the company produced PCBs for decades while hiding what they knew about the toxic chemicals’ harm to human health and the environment," a news release from Ferguson's office states. "Monsanto will pay $95 million as compensation for damages PCBs have inflicted on the state’s natural resources, including the economic impact to the state and its residents."

Ferguson is urging state lawmakers to use the money from the settlement as intended, to help clean state waters and protect aquatic species that have been harmed by chemical pollution over the years.

“Monsanto knew the dangers of PCBs, but hid them from the public to protect their profits,” Ferguson says in the release. “Washington has been shouldering the health and environmental costs of PCB contamination and clean up for decades. This record payment holds Monsanto accountable for the harm they inflicted on our state.”