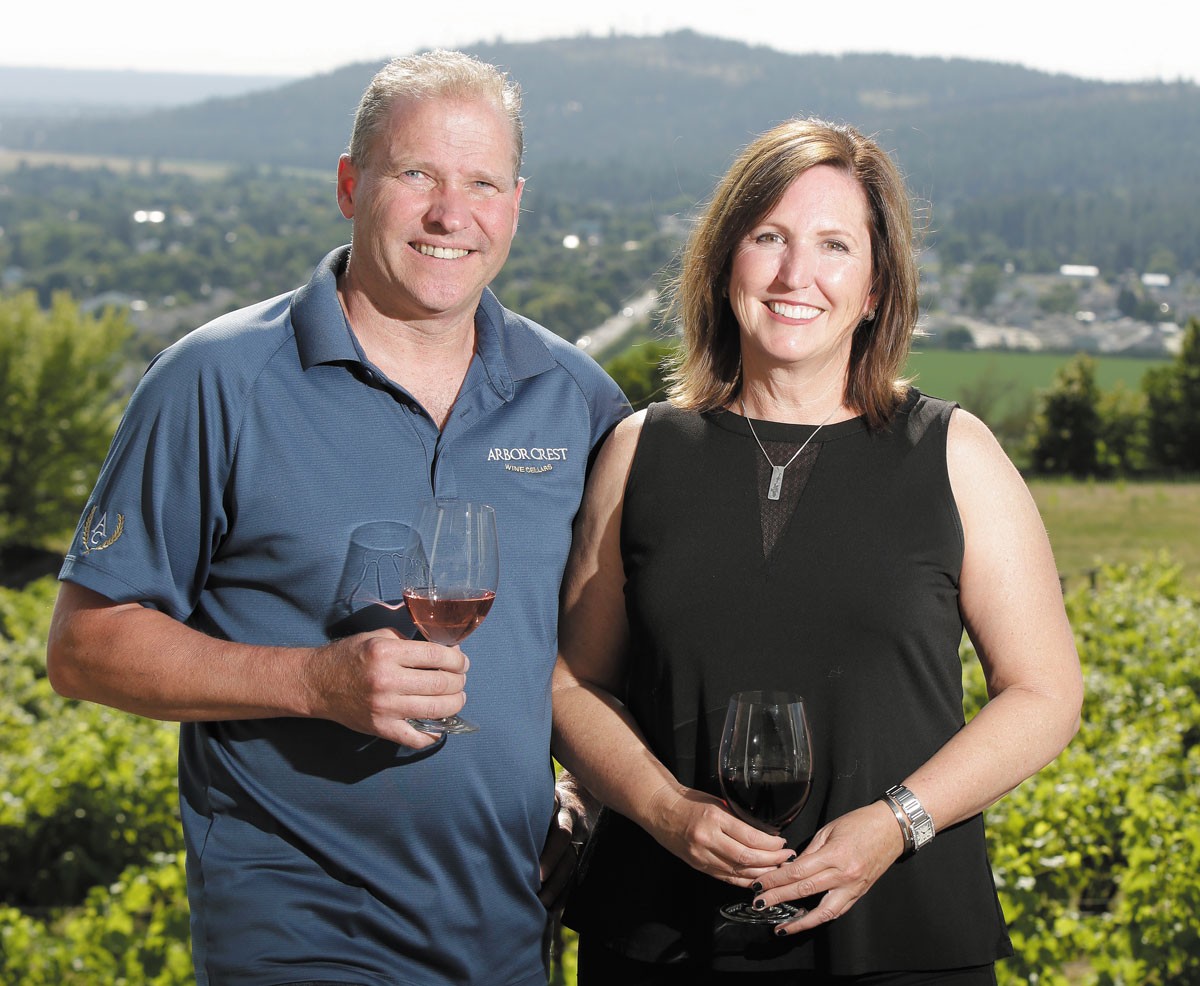 Young Kwak photo
Jim and Kristina van Loben Sels team up to run Arbor Crest winery; she specializes in wine making while he works on concert and event planning.

Perched 450 feet above the river in Spokane Valley sits the "Cliff House," a historic property designed and built in 1924 by inventor Royal Riblet, which now serves as home to Arbor Crest Wine Cellars.

Started in 1982 by Harold and Marcia Mielke, Arbor Crest is currently owned by the Mielkes' daughter Kristina van Loben Sels and her husband Jim.

"They had the initial vision and passion," she says. "Dad was originally from Spokane and when they moved back to this area they decided they wanted to start a winery."

Arbor Crest actually has operations on two properties in the area, the Cliff House estate, and a production facility on nearby Buckeye Avenue along the river.

"The production facility was the main operation for my grandfather's business, Mielke Orchards, which produced cherry pie filling for Hostess and Dolly Madison," Kristina says. "My parents and uncle converted it into a winery in 1982, and today that site holds both our winemaking facility and my brother John's brewery operations."

She says the Mielkes purchased the nearby Riblet Estate in 1984, and soon decided to move everything but the winemaking to that site.

In addition to the Cliff House, the property now also includes a tasting room, several office buildings, and a warehouse. The surrounding grounds feature cliffside views, crumbling rock buildings and walls, a pool, a checkerboard, several gardens, a vineyard and a cherry orchard.

"The family was always into the agriculture business and they looked to capitalize on Washington's potential as a great growing region for good wines," Jim van Loben Sels says. "Their decision to purchase the Royal Riblet Estate was the linchpin that established us as a winery here."

Jim says he and Kristina took over the business in 1999, and implemented changes that they hoped would result in further growth. "We were able to build up programs like the concerts, weddings and events, as well as create a tasting room space," he says. "We took the business from a three-month model to what's now a 12-month operation, that's sustainable on retail rather than wholesale."

Kristina has a degree in winemaking and spent many years in California making wine before coming to Arbor Crest. "My role at Arbor Crest is more CEO with direct focus on winemaking, but we do have a winemaking team in place that operates the day-to-day," she says.

Arbor Crest has 10 full-time employees and about 25 seasonal employees.

She says Jim also touts a strong background and interest in viticulture and the winemaking process, but has a slightly different role with the winery.

"His strength has always been to build new programs and look long term," she says. "He, along with our team have grown our concert and event program into what it is today."

Although they have tried expanding to add a downtown tasting room, the van Loben Sels' say they're currently firmly focused on the Cliff House estate.

"We'd tried several times to bring our wines downtown, but found that people are always more driven to visit our historic grounds and have that tasting room experience," he says.

The two say Arbor Crest specializes in Bordeaux wines, with its sauvignon blanc serving as its flagship wine, followed by the Dionysus (a Bordeaux blend), and the cabernet. 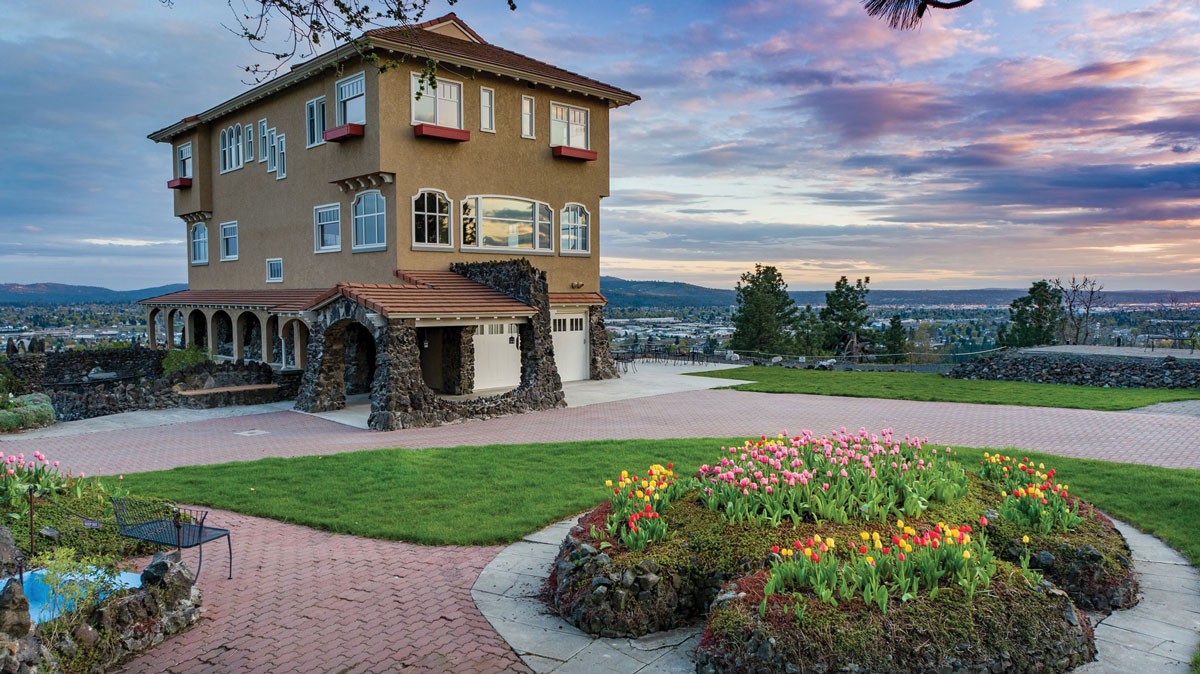 "Arbor Crest produces and sells an average of 15,000 cases of wine each year," says Kristina."We've added other varieties over the years but reds are really our showcase."

Kristina says Arbor Crest is best known for the Dionysus, which contains five Bordeaux varietals and has consistently garnered awards.

"It's one that I love to make, because that's where the art of winemaking really comes in," she says.

"Our wine style is balanced and food-friendly, and meant for everyday consumption," Jim says. "The other thing we offer is outstanding service, taking great pride in giving customers a special experience that they'll remember fondly."

As the restaurant industry struggles to adjust to changes brought on by COVID-19 closures, the van Loben Sels' say they've been using this time to recharge and refocus.

"This time of year we're usually ramping up with concerts and large events, but the current environment has caused us to switch our focus to small scale events with limited people," says Jim.

He says Arbor Crest had been approached last fall by local chef Chad White, about a food program partnership, but the timing wasn't right.

"We decided to use the time while the tasting room was closed to renovate, add some restaurant equipment, obtain a permit, and plan how to provide gourmet, restaurant-quality food and service to match our wines," he says. "We figured the time was finally right to partner with Chad, so we're going to give it a go."

Arbor Crest has previously allowed guests to bring their own food on campus, but now that it plans to offer its own food, van Loben Sels says that option may be scaled back.

"We're still figuring some things out, and trying to plan ahead for how things might work after COVID-19," he says.

Kristina says that prior to COVID-19, Arbor Crest typically hosted about 40 concerts and between 20-30 weddings and other private events annually.

"We won't be able to host our typical concerts, but we will be focusing on a culinary experience with wine and beer along with some lighter, background entertainment," she says. "Once we are able, we will return to our concert program but it may look a bit different."

She says the venue will continue to host weddings, albeit on a smaller scale than usual, and plans to use its outside venue to accommodate larger groups.

"Our current goal is to keep our focus on the estate, and how we can ensure everyone is able to continue to experience all that's wonderful here," she says.

"We're thankful for the support from our wine club members, and enjoy being able to offer them this small-batch, exclusive item," he says.

Arbor Crest's Dionysus ages well and pairs with many different foods, but Kristina van Loben Sels particularly recommends serving it with a filet mignon. Her husband Jim, "makes a really good version that's drizzled with Gorgonzola sauce that I just love," she says.

Jim says his favorite pairing, blackberry cobbler with ice cream alongside Arbor Crest's cabernet franc, a combo that was introduced at a winemakers' dinner held at Spokane's Steamplant Grill years ago.

"I was blown away by the combination, and it still stands out in my mind as simply delicious," he says.