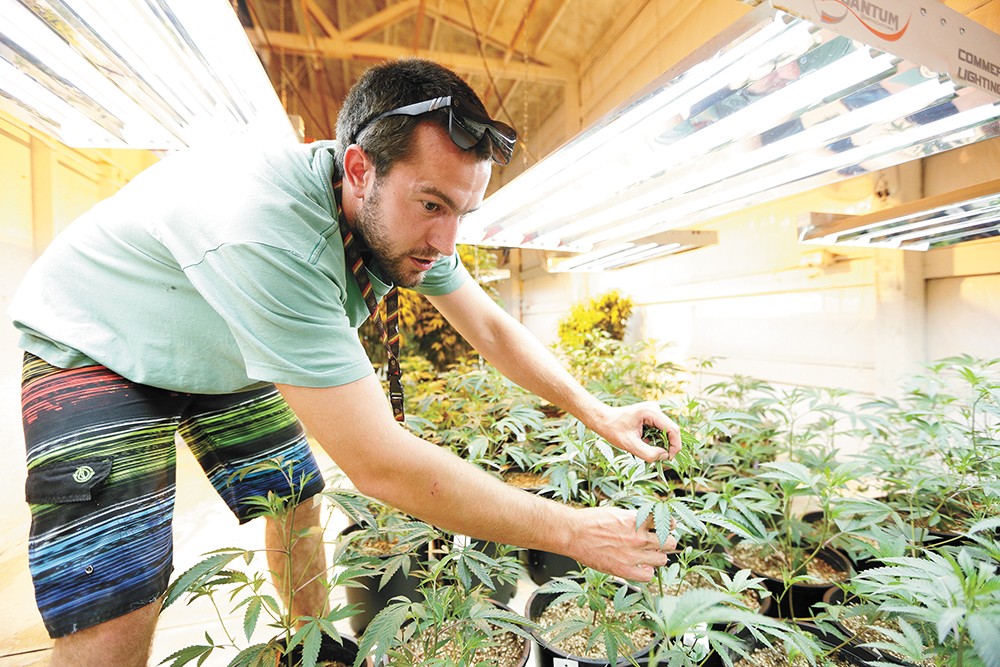 Young Kwak photo
Nick Kessler, one of the owners of Orange State Cannabis, tends to plants in the indoor portion of their farm.

Walk through the field at Orange State Cannabis, tucked behind an opaque privacy fence topped with razor wire, and there's a surprising lack of the telltale odor you'd expect from a cannabis farm.

But the outdoor plants aren't flowering when the Inlander visits the farm near Elk on a warm summer day last week. It's when the flowers are produced and harvest happens that they are most likely to smell, explains Bernie Kessler, who owns Orange State with his son Nick and a silent partner.

Step inside the indoor portion of the operation just a few yards away, however, where flowered plants from the outdoor greenhouse and indoor grow room on the farm are being trimmed, and a sweet, skunky smell permeates the room. Step outside and close the door again, and it's not noticeable.

It's this distinction between inside and outside, mature plant and growing plant, that irks Kessler when he thinks about how much he now has to pay to the Spokane Regional Clean Air Agency under its new odor program aimed at limiting the smells from marijuana production and processing in the county.

After receiving hundreds of complaints over the first few years of legal recreational marijuana production, the agency worked to create new rules to limit complaints and negative impacts from odors on neighbors. The annual program fees, which will pay for agency staff time to respond to complaints and do site evaluations, were set in January 2018, but weren't collected the first year.

This March, the clean air agency's board finalized the fees at a lower level than initially proposed, invoices were sent out, and by July 15, the latest overdue payments for this year's fees are due.

"They dropped the fees 20 percent from insanely too high to extremely too high so we're supposed to feel better," Kessler says.

Under the program, an indoor grower with the largest state license available owes the clean air agency $651 per year, plus a $209 per year fee for processing. But mixed indoor/outdoor sites like Orange State, with an exemption for a temporary structure like a greenhouse, owe a total closer to $4,000 per year.

With little for outdoor growers to do to control their odor, and a disproportionately high impact from the new fees on mixed indoor/outdoor operations, Kessler questions the fairness and usefulness of a program he believes will put growers out of business while doing little to reduce odors.

What's more, while Orange State has never received an odor complaint from its neighbors, the outdoor grow that sparked hundreds of complaints to the clean air agency — Bang's Cannabis — is about to go out of business.

"Who're they going to have left to regulate?" his wife, Katie, asks.

"It was evident that something needed to be done, that this was not just one or two," Oliver says. "It was quite a wide range geographically."

So the agency gathered a marijuana advisory committee and the agency's board finalized rules with public input by January 2018. While they collected one-time registration fees for the first year, the board opted to hold off on the annual fees while waiting to see how things went with growers putting other recommendations into place, Oliver says.

For indoor operations, that might look like a filtration and ventilation system. But for outdoor operations, the only real options are to make sure growing plants are located away from property lines and that harvest times take into account prevailing winds and the weather, she says.

This spring, considering the first year of information, the board finalized the annual program fees, which will go toward staff time to respond to complaints, inspect sites, and make sure farms and indoor grows are doing what they can to minimize odor, Oliver says. The estimated staff time needed is a little less than one full-time employee per year, with fees expected to bring in more than $150,000 this year.

"The whole intent with this rule was shifting from a reactive complaint approach to a proactive approach to protecting air quality," Oliver says. "We do expect the number of complaints to drop off over time with the requirements and regulations, but it is going to take time. It's not going to be an immediate thing."

The regulations set up fees for each tier or size of license offered by the state, and type of operation. The largest indoor growers in an urban area, potentially making millions per month, pay $651 per year; the largest tier outdoor-only grower pays $1,269 per year, and the largest indoor/outdoor combination pays $1,920 per year, each with an additional $209 per year if they also are processors.

But some outdoor grows were also using "hoop houses" with plastic sheets to cover their plants and protect them at certain times of the once-yearly growing season, while others were using "temporary structures" such as greenhouses. The clean air agency determined those types of uses were the source of many odor complaints, and therefore required an exemption for growers who already had them to be able to continue using them.

So Orange State, with a greenhouse on site, applied, paying an extra one-time $980 fee for that exemption. As an indoor/outdoor grower with an exemption, the company sees its annual fee jump to the clean air agency's highest rate of $3,751 per year. For reference, the operation sold about $112,000 worth of weed in 2018.

As part of the regulations, no new growers can apply for that exemption, so over time it's expected the use of those structures for outdoor growing will be reduced or eliminated, Oliver says.

"Anybody starting now has a huge potential of losing their one crop every year. In my mind, it's pretty much a moratorium on outdoor grows," Kessler says. "We got the exemption, but it's still unfair, it's not right. I have to bring up the fundamental things that are damaging to this industry. It's too early in the game to start playing that." 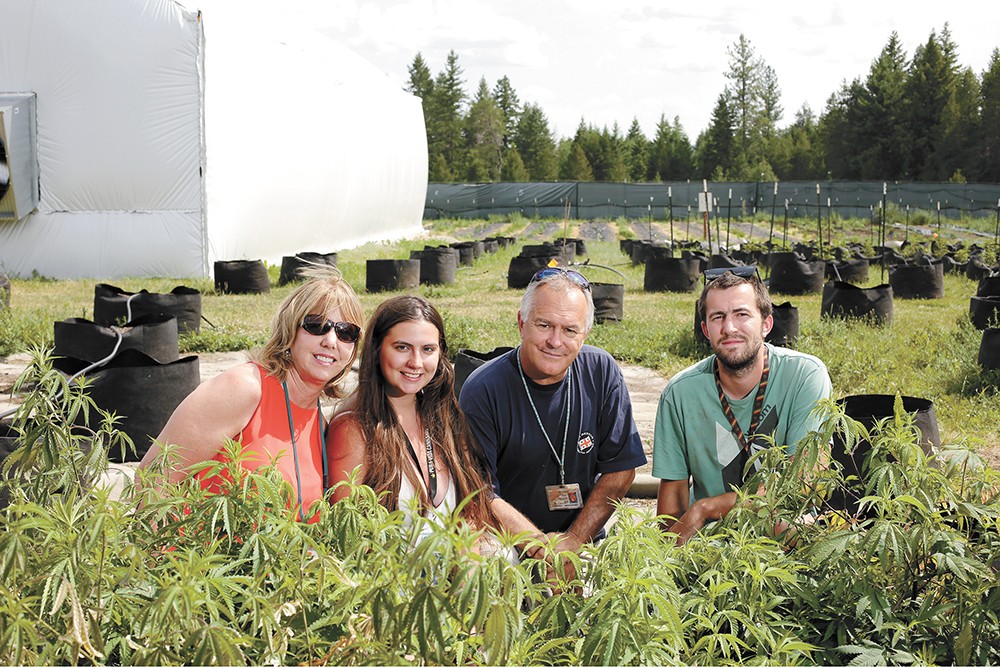 He also questions why he should have to pay thousands of dollars per year for staff time to respond to his property when their neighbors haven't complained once about the smell, Kessler says.

"This is a clear money grab," Kessler says. "A couple residents were able to weaponize Clean Air's authority, and now they believe they have to go after these farms."

Kessler highlights Bang's Cannabis, the target of hundreds of odor complaints from a few close neighbors, and a recent casualty of the market.

Patrick Bang and his wife opened Bang's Cannabis in Cheney in 2014. Back then, when the first complaint of an odor as far as a mile away came in, Bang says they tried to be good neighbors and make some changes on the farm, working with the clean air agency to reduce any smells.

The only problem was the agency didn't have many suggestions for what to change, he says.

"We said, 'We don't want to be the nuisance neighbors, we want to figure something out together,'" Bang says. "They didn't have any solutions in mind to help me fix the problem."

Eventually they settled on limiting the amount of time he opened up the walls on the hoop houses he used to protect his plants from the elements. The thinking was that the smell would concentrate under the covering and pour out in an especially stinky way whenever the sides were opened up.

When Bang had to deviate from that plan and open the walls at an unplanned time because of 100-plus degree weather a few years ago, Bang says he got fined by the agency. The company fought the fine in court and lost but have since refused to pay up.

In the intervening years, the clean air agency has received hundreds of complaints against his operation from upset neighbors. From October 2014 to January 2019, a total of 529 cannabis-related odor complaints were received by the agency, and 202 of those were directed toward Bang's, according to public records.

Bang says he tried to help the clean air agency craft its marijuana program, which involved formation of a marijuana advisory committee with representatives from the industry, community, and regulatory agencies, but he was told he had a conflict of interest. However, one of his neighbors who made many of the complaints against him was allowed to sit on the committee.

Now, due to a combination of a saturated market, an expensive expansion and what he views as unfair fines and fees from the clean air agency, Bang says they're getting out of the business.

"We are closing up," Bang says on Monday, July 8. "We just sold the last of our product and plants, and we're probably going to look at selling the business and the license."

Knowing there's little to be done to regulate outdoor grows, both Bang and Kessler question why their agricultural product is any different from a pig or cow farm that could get an exemption from odor regulations if they're more than five acres.

Kessler, a chemical engineer, has repeatedly asked the clean air agency how a natural plant can be targeted for its smell as a pollutant.

"The question comes to me, can a plant be a pollutant? I mean if people can weaponize the odor from a plant, can I do that for a Christmas tree farm?" Kessler says. "If I grew a patch of mint next to your house and that wafted over, do you have a right to complain and place controls on me growing mint or lilacs?"

Kessler plans to stay in the business, and says he is actively looking at options to be considered for an agricultural exemption similar to other legal, odor-causing farms.

The tricky part is that the largest tier of grow allowed by the Liquor and Cannabis Board is 30,000 square feet of canopy, which is less than an acre, Kessler says. But if he were to grow another agricultural product on the rest of his several acres — say, equally as stinky industrial hemp — he wonders if he'd be exempt from the spendy odor fees.

The answer he's gotten from the clean air agency so far has been bureaucratically unsatisfying.

In response to an email asking whether legal hemp would qualify him for an odor exemption, Oliver tells Kessler that the state's Pollution Control Hearings Board, which oversees appeals about odor and pollution issues, "has made it clear that each situation has to be evaluated on a case by case basis." The Spokane clean air agency can't tell him if the exemption would apply "until after we have an odor complaint."

"Now we have to figure out how to, as outdoor growers or people with less than five acres, how to expand our grows into more than five acres by bringing in hemp or cows or I don't know what it'll take," Kessler says. "That's the game." ♦

The original print version of this article was headlined "Dank Stank"