Spokane's Into Africa fundraiser highlights Kenyan food and culture, and local efforts to improve quality of life there 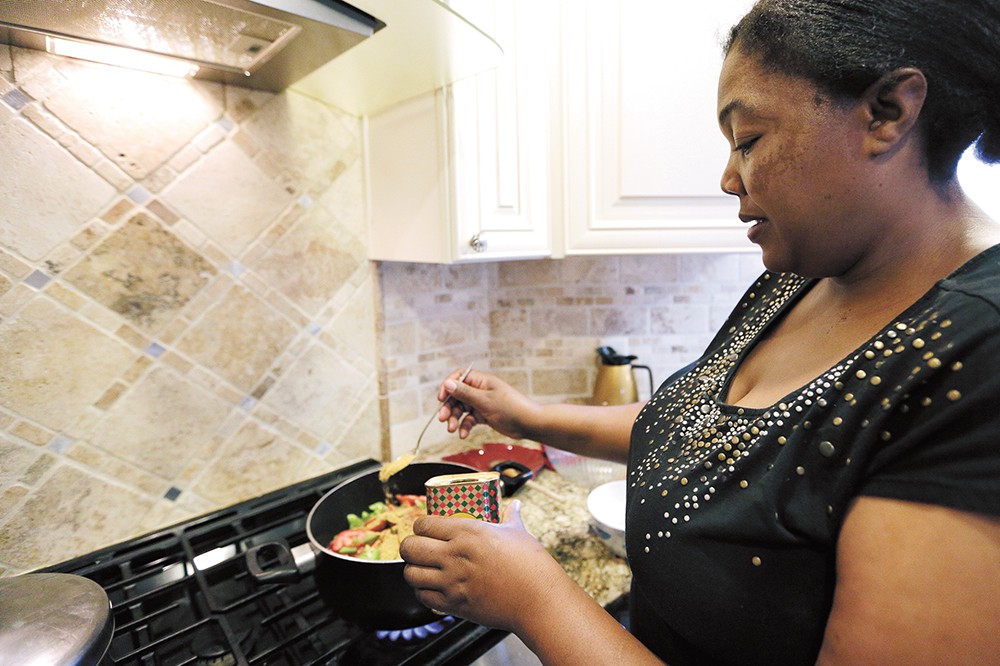 When he returns to Spokane to see family, Nicholas Sironka often cooks and eats ugali, a white cornmeal dish like polenta, but thicker, and sukuma wiki, braised collard greens. Both are staples of Kenyan culinary culture that Sironka grew up eating.

In Kenyan culture, he explains, men don't traditionally cook. "Men like to barbecue the meat," he says, noting that the savory smell of roasting meat reminds him of home.

Home. That's a loaded word, and one that for many is inextricable with one's food traditions. For Sironka, who made himself known throughout Spokane for the way he represented his Maasai heritage — his distinct red attire, the dance troupe he labored to bring here from Kenya to the delight of local audiences, and his own vibrant batik paintings — home could be California, where he now lives, or Spokane, where two of his sons still live, or even Kenya, where his daughter lives.

"Home is wherever you are," says Jane Kamuasi, a friend of Sironka's who opened her Spokane-area home to us while preparing several traditional Kenyan dishes: ugali, sukuma wiki, mbuzi — a goat dish which Kamuasi stews with tomatoes, onions, green peppers and curry — and maharagwe, slow-cooked beans.

Kenyan cooking, explains Kamuasi, doesn't use a lot of spices; mainly curry — they buy a Kenyan blend off Amazon — a bit of black pepper, and maybe some salt.

Goat, beef and lamb are the most common animal proteins eaten in Kenya, and may be stewed, but more often grilled, which in Swahili is called nyama choma, or roasted meat. Kamuasi works with a local goat farmer, packaging the meat so that every portion — meat, bone, intestine — is used. As she cooks, Kamuasi opens her freezer and removes a goat head, which will eventually be cooked down to make a soup as delectable and rich in nutrients as any expensive jar of bone broth sold in higher-end markets.

Like most Kenyan women, Kamuasi learned to cook from her mother. "You must learn to cook because you care for the whole family," says Kamuasi, whose daytime job is also as a caregiver, at a residential home.

Kamuasi and her husband, Mike Toroitich, met in Kenya and relocated to Southern California — they found one Kenyan restaurant there — living there many years before moving to Spokane three years ago. Winters have been a challenge, she says, but they like their house, located near the school her young son attends, and with a large backyard where she can experiment with her garden.

We admire her kale, still growing heartily despite the advancing chill. She's harvested some cherry tomatoes, yet the potatoes didn't produce and it remains to be seen if the pumpkin will ripen in time.

We discuss planting garlic with Kamuasi, along with the purpose for our visit: We want to know about Spokane's African community, specifically residents with Kenyan ties, in advance of an annual event featuring Kenyan food.

Into Africa is an annual event benefitting Partnering for Progress (P4P), a nonprofit founded by two Spokane women after returning from a 2007 medical mission to southwestern Kenya, where they became determined to address chronic health and dietary issues affecting the region's rural communities.

Since forming in 2008, Partnering for Progress has held its annual African-themed fundraiser and auction, hosted the last four years at Mirabeau Park Hotel in Spokane Valley.

As such, Into Africa's menu highlights the influences of not only some of these neighboring countries, but also other continents. Filled pastries called samosas, for example, and pilau, a variation of rice pilaf with cardamom, onion, cinnamon, ginger and cumin, reflect Indian cuisine. Kachumbari, a salad of tomato, onion, cilantro and cucumber, has ties to Tanzania and the Great Lakes region of East Africa. Kuku, a lemony chicken stew, includes coconut milk and sweet potatoes, native to Central America and brought to Africa by the British in the 1880s. Nyama choma, or grilled lamb, reflects the predominantly pastoral Maasai culture, while ugali is linked to Portuguese traders who first introduced maize or corn to East Africa.

Of course, Partnering for Progress's event menu also features ugali and sukuma wiki, which Kamuasi and her family eat in the traditional manner with their right hand. They use slabs of the thick ugali as a sort of scoop to hold the savory stew and greens.

The food is flavorful, filling and delicious, and is typical fare for special occasions, too, says Kamuasi.

There isn't any formal organization in the Inland Northwest that connects Kenyans socially, says Kamuasi, nor is there a Kenyan restaurant (although Queen of Sheba serves Ethiopian food, which has some similarities). So when there is birthday or similar event, Kenyans in the community call each other or connect via the WhatsApp mobile app. And everyone is welcome, regardless of whether they were invited or not.

"In Kenya, you just show up and there is always food," says Kamuasi.

And when you do arrive, explains Sironka, if you weren't accounted for in the meal planning, it doesn't matter; others will eat less so that you may eat. That is their way, he says. ♦

The original print version of this article was headlined "Out of Africa, Into Spokane"