Spokane's Lester Bloom is living a childhood dream making video games; his first solo project PlanTechtor is out this month 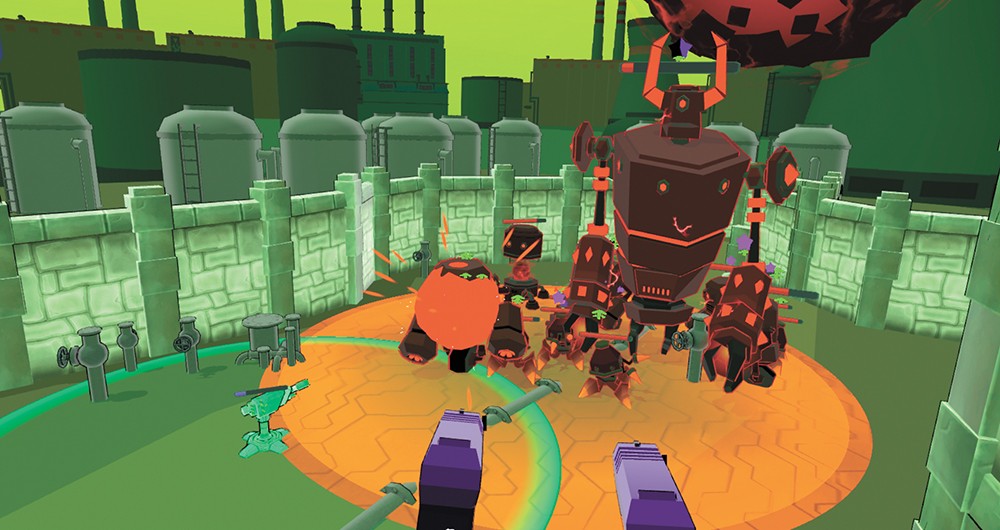 From gripping a Nintendo controller on the living room floor to a desk at the Seattle studios of that same video game behemoth, Lester Bloom's dream to make games like those he loved as a kid are now coming full circle.

The 38-year-old Spokane native is about to release his first full-length solo project as an independent game developer. PlanTechtor, a virtual reality (VR) first-person shooter arrives for PC on Feb. 27. In PlanTechtor, players defend a castle from invading enemies by using creative and strategic combinations of skills and ammunition for three main weapons: a bow, a bazooka and dual-wielded pistols.

"I was always in the world of video games and creating ideas. I remember during recess in elementary school drawing maps for Mario Bros.," Bloom recalls. "Coming out of college I had this job at Nintendo, and that was my dream come true. I was like, 'What do I do now? I pulled it off.'"

Bloom spent roughly the next decade and a half as a developer for big-name studios including Microsoft's Xbox Game Studios and ArenaNet, the latter for which he worked on the popular online game Guild Wars 2. On top of the demanding, deadline-driven environment at those companies, Bloom also coded his own games at home.

"It's always been a dream to move into my own stuff full time, but it takes a lot of work to get things up and running and get to that point," he notes.

In the years since landing that dream job at Nintendo, Bloom got married and started a family. In mid-2016, he realized he needed to shift priorities from 50-plus-hour weeks at the office, and hours more each weekend on personal projects, to focus on his young family.

Bloom couldn't quit his day job, however, until he was closer to finishing PlanTechtor, which he began coding later that year. When the game was close to completion in mid-2018, he and his wife decided to move back to Spokane, seeking a slower pace and to be nearer to family.

"I now work out of the house, and because PlanTechtor is finished, I'm only working 40 hours a week now. I haven't done that since ever!" Bloom says. "I get to spend a lot more time with my family and I see my kids every day."

Bloom's experience is not uncommon in the hard-grinding world of video game development, which can be especially grueling for independent developers working solo or on small teams. As a one-man studio (he contracted out some work to other coders and artists), it's all on Bloom to conceptualize, code, debug and promote each game he publishes through his studio FunnerSoft, starting with PlanTechtor.

In just a few days, he'll see all that work pay off when PlanTechtor is released through the PC distribution platform Steam. The game has 50 levels of play and is priced at $15. It's compatible with the HTC Vive, Oculus and Microsoft Mixed Reality virtual reality headsets.

"It's a mixture of strategic planning and intense virtual reality action," Bloom describes. "Each level has two parts. At the beginning you plan what you want to do. You get hints to the enemies you have to fight, and get to design the strategy you use."

Before each progressively difficult level of PlanTechtor, players choose from a variety of features to load onto each of their three weapons. Throughout the game, players also unlock special combos, used to create powerful damage effects that synergize between weapons.

"Then you start the fight and enemies are showing up and they try to destroy your castle, so you use the weapons in a first person shooter VR environment to take down enemies," Bloom continues.

The game is infinitely replayable, and all levels can be revisited later in a player's progression as they unlock more features. Each level has multiple potential paths to success, and Bloom estimates most players could beat the entire game over about 15 hours of play.

"It feels like a comic book or cartoon, with some aggressive edginess," he says of PlanTechtor's visual aesthetics. "There's some metal music and the enemies are a stark, contrasting black and red, but the worlds you are trying to protect are a warm and inviting place that you want to protect." ♦

The original print version of this article was headlined "Leveling Up"