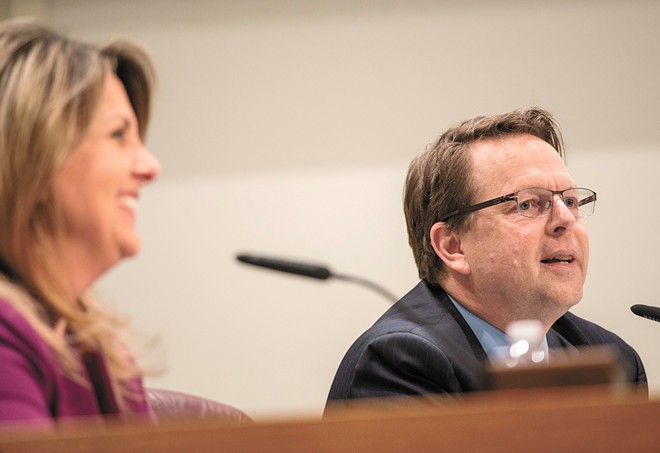 Spokane Mayor Nadine Woodward remembers seeing the police officers’ faces in June when the Spokane City Council struck down their proposed contract with a unanimous 7-0 vote.

“The officers were watching that count happen as I was speaking to them,” Woodward says. “They were completely dejected, frustrated, upset. I got to see that personally.”

The union had gone over three years without a current contract or pay raises. And yet, much of the public had been waiting more than seven years for independent police oversight that they’d voted for in a 2013 ballot initiative and saw that contract proposal as again shortchanging promised oversight.

In the midst of the national flood of activism tied to George Floyd’s death, City Council President Breean Beggs decried the proposal as a step backward. The council was flooded with thousands of emails. Over 20 local Black leaders took out a full-page ad in the Spokesman-Review decrying the proposal.

Contrast all that with what happened last Monday: When the council unanimously approved the latest version of the contract, only a single citizen objected at the meeting. Both Beggs and the Spokane Police Guild publicly touted the result as a victory for both the police and for civilian oversight.

At a time when city councils and state legislatures across the country are trying to turn last summer’s demands for reform into actual policy, it offers proof that agreement is possible. But it also shows just how long it can take to get there.

“I heard of a whiteboard in the police department where officers were tallying every day they had gone without a contract,” Woodward says.

By the time a new contract agreement had finally been reached last month, she says, “that day was 1,500.”

It was the police union, Woodward says, that came to her with a solution: Bring Council President Beggs to the negotiating table.


In one sense, it was a bold move. During the depths of a police brutality scandal a decade ago, Beggs had been one of the department’s biggest critics: He was the one who represented the family of Otto Zehm, a mentally disabled janitor who died after being beaten by police officer Karl Thompson.

“Guild leadership contacted me and said, ‘We’re not going to get any movement on this, unless we do something different,’” Woodward says. “The council president was quite surprised when I called him and asked him if he wanted to be a part of this process.”

Beggs had been partially responsible for the creation of Spokane’s police ombudsman, the figure in charge of providing independent police oversight. He’d even served as the attorney for the commission that hires and oversees the ombudsman.

And since many of the sticking points around the contract concerned the ombudsman, Beggs was a logical choice to represent that point of view.

Woodward says that Beggs “did a great job of explaining what the oversight should look like” while the guild was equally articulate in laying out their concerns.

“When you get to the table, and truly for the first time, people are listening to each other,” Woodward says, “that was the game changer: Each side got to learn from each other.”

In this case, there was an actual table. In a year dominated by glitch-ridden Zoom meetings, these meetings were held the old-fashioned way: Beggs, the mayor, the police guild, attorneys and human resources staffers all gathered in a City Hall conference room, often for as long as four hours at a time.

Many of those hours, Beggs says, were dedicated to “deep listening,” trying to understand the root of everyone’s concerns.

Beggs is careful not to talk about exactly what happened behind closed doors. Just as Spokane residents voted to support independent police oversight, they also officially voted two years ago to hold these sorts of union negotiations in public. Yet these negotiations were still sealed off under the old set of rules.

But in other contexts, he says, the guild has previously argued that they wanted to write a contract that protected them no matter who the mayor, police chief or ombudsman might be.

“They were kind of living in that world of ‘worst case scenario — what if we have everybody in leadership against us? How are we gonna protect our members?’” Beggs says.

The trick, Beggs says, was figuring out how to address those fears and provide more oversight at the same time.

“To be able to listen, and learn and find common ground where everybody could agree — it took hours and hours to get to that point,” Woodward says.

Finally last month, they came to an agreement. The police guild did not respond to an Inlander interview request before deadline, but Spokane Police Guild President Kristopher Honaker praised Beggs and Woodward for their involvement in a press conference last month.

“It’s a better product for the citizens of Spokane and for our membership as well,” Honaker says.

It took so long to approve the recent contract, however, that it’s almost time for the city to start negotiating the next one.

The man in charge of police oversight right now, Ombudsman Bart Logue, is a lot more mixed about the new contract. Yes, he sees progress: Unlike last year’s proposal, the guild wouldn’t be able to try to get him fired by filing a grievance that he was “exceeding his authority.” He’s happy that the contract lets him share more of his authority with the deputy ombudsman, so his office won’t shut down whenever he’s on vacation.


And he’s pleased that the contract officially grants him the power to write a closing report about what happened in a controversial incident. But he says he’s still limited in what he can say in a way that he believes “crosses the line from what the public expects to read in a report.”

He’s barred from naming specific officers, from agreeing or disagreeing with the police chief’s disciplinary decisions, or writing whether an officer’s actions broke the city’s policy.

The new contract explicitly says the ombudsman isn’t allowed to “criticize an officer or witness” at all.

Still, Logue says he’s a thoughtful enough writer to be able to weave between these restrictions.

He can’t use the phrase “violated a policy,” he says, “but what I can do is write what the policy is, and then describe what happened.”

He’s more concerned about the ways independent investigations are still restricted. If an incident is a “serious matter” — something that could lead to “suspension, demotion, or discharge” of an officer — the ombudsman commission decides whether to approve a request from Logue to conduct an independent third-party investigation.

The trouble is, Logue says, that the contract doesn’t explicitly say who gets to decide whether the incident reaches that level. In the past, a stalemate meant no investigation.

Beggs says the new contract does lay out a way to resolve that or any other unanswered question: Disputes can be taken to arbitration.

Logue is wary that the arbitration process could be used to bog him down in grievances. But he says he can handle it. Ultimately, he sees the agreement as a small step forward.

“If I were a city councilperson, I probably would have voted for it. Because it’s been too long,” Logue says. “And the city owes it to the police to treat their employees correctly.”

Last June, Beggs published a long list of 17 possible police reforms, including limiting the use of police dogs, neck restraints, rubber bullets and armored vehicles. Yet instead of trying to push the reforms through the council immediately, Beggs chose the slower route. He and the mayor agreed to hold face-to-face facilitated discussions involving community members about police reform.


In part because of COVID, months passed without those discussions taking place.

In the meantime, the state Legislature has already been covering some of the same ground. The state House, for example, passed a bill to ban chokeholds, neck restraints and no-knock warrants and to limit the use of tear gas. The state Senate, almost unanimously, passed a bill to create a statewide database to consistently track when officers use force against members of the public.

The mayor and the council are tentatively scheduled to have their first public police-reform discussion at the end of next month, though the location and topic list still hasn’t been hammered out.

“We anticipate this isn’t just one meeting,” Woodward says. “These are conversations that will continue throughout the year.”

To Beggs, creating reform that sticks is something that takes time. It’s about listening, about relationships, about tenacity.

But Beggs is nothing if not patient. When the contract passed last Monday giving the ombudsman more investigative authority, he says, his daughter posted to her Instagram: “My dad was working on this when I was in second-grade. Congratulations, Dad.”

Today, he says, his daughter is a junior in college. ♦

The original print version of this article was headlined "1,500 Days Later"