Despite being hundreds of miles from the nearest ocean port, Spokane holds a special place in the Navy's heart 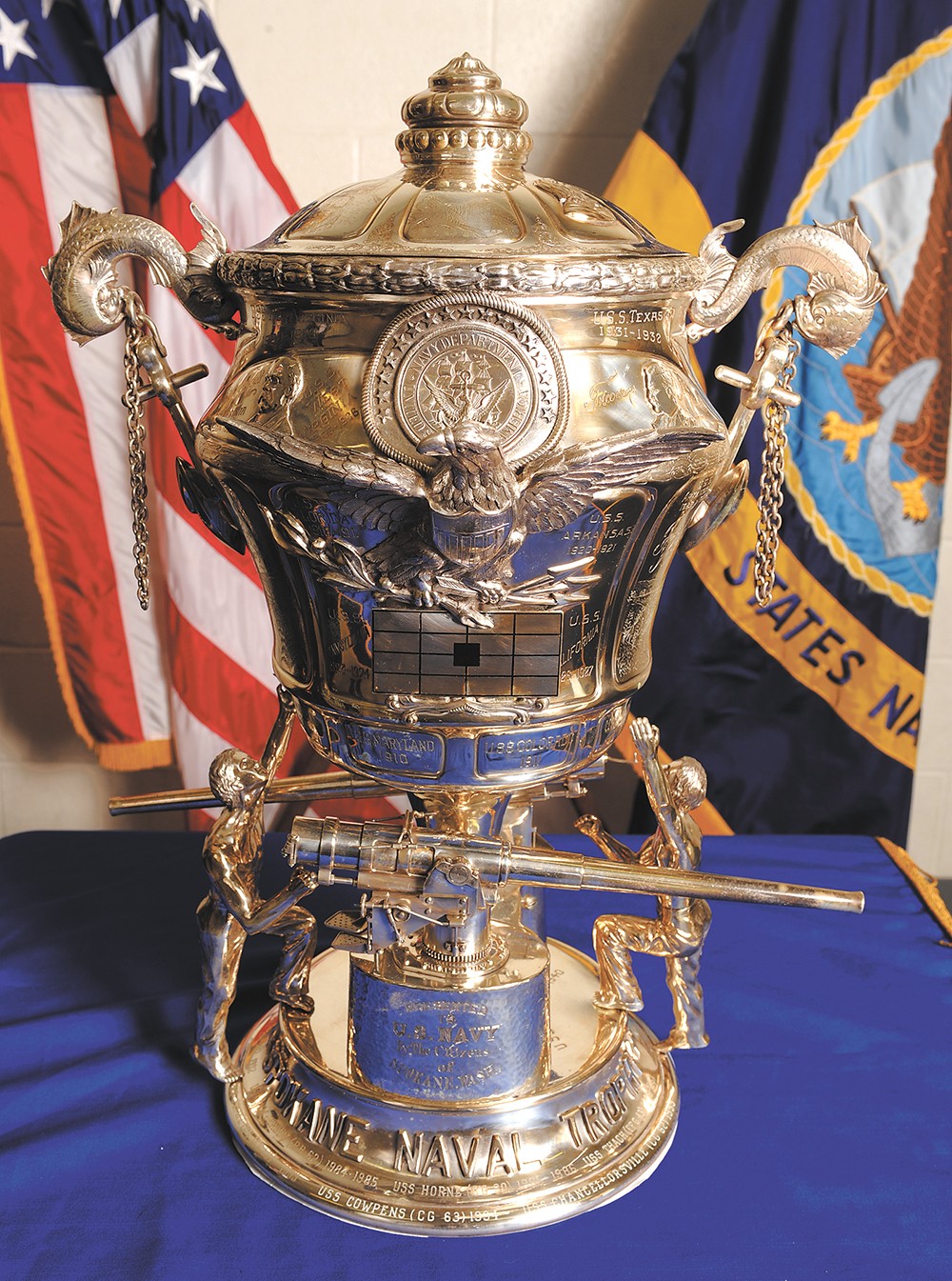 One of the most beautiful, oldest and most prestigious trophies of the United States Navy is a cup made of sterling silver "so pure and clear it looks as if it might melt if touched." It is designated as the Spokane Naval Trophy and was established as an official award of the Navy in 1908 by order of President Theodore Roosevelt for excellence in naval gunnery.

In 1907, the Spokane Chamber of Commerce and the city's Spanish American War veterans wished to honor Spokane sailors and its homegrown naval hero, John Robert Monaghan. They commissioned Leo M. Dornberg, a local jeweler, to design and create a trophy to be presented to the Navy. His creation contained 400 ounces of sterling silver from the Silver Valley, lined in gold, standing 24 inches high and 16 inches wide. As an icon of American history it's priceless, but in 2008 it was valued at more than $4 million.

Around the top are bas relief images of President Theodore Roosevelt, Secretary of the Navy Victor Metcalf, Spokane Falls, Mount Spokane, Chief Spokane Garry, Fort George Wright, the old Spokane Federal Building and Ensign Monaghan. At the base of the trophy are two sailors molded of solid silver manning a 10-inch gun, with workmanship so fine that some observers have opined that they might actually be able to be fired if properly loaded.

The trophy was given to and accepted by the Secretary of the Navy, and in 1908 President Roosevelt established it as an official award of the Navy. Between 1908 and 1941 it was annually awarded to the battleship or battle cruiser that excelled in great gun marksmanship. The USS ARIZONA (BB-39) won the Spokane Trophy in 1935.

In 1941, the trophy was taken out of service for fear that it would be damaged or lost as the country prepared for World War II. After four decades in storage, it was returned to active service in 1984 and has been awarded annually to the most combat-ready cruiser or destroyer of the Pacific Fleet, as judged by the Commander in Chief of the Pacific Fleet.

John Robert Monaghan, born in Chewelah in 1873, was a part of the very first graduating class of Gonzaga College (now University). He soon became Spokane's first war hero. In 1895 he was the first Washington state resident to graduate from the Naval Academy. In 1898 he was assigned to the USS PHILADELPHIA (C-4), which was operating in the Philippine Islands during the Spanish American War. Following the end of that war, his ship was sent to Samoa. In 1898 the United States and the United Kingdom were locked in a dispute with the German Empire over who should control the Samoan Island chain. Samoa was important to the United States as a coaling station for its fleet. On April 1, while serving ashore with an American, British and Samoan unit, his force was ambushed by a group of rebel Samoans. In attempting to rescue another officer, he was killed.

The official report stated: "The men were not in sufficient numbers to hold out any longer, and they were forced along by a fire which it was impossible to withstand. Ensign Monaghan did stand. He stood steadfast by his wounded superior and friend — one rifle against many, one brave man against a score... He knew he was doomed. He could not yield. He died in heroic performance of his duty".

In 1906 a statue was erected in Monaghan's honor and still stands in downtown Spokane between the Federal Building and the Spokane Club. He was further honored by having two destroyers named after him, the first USS MONAGHAN (DD-32) served from 1911-30; the second, (DD-354), from 1935-44.

In 2008 the trophy came home to visit Spokane on the occasion of its 100th anniversary. Since that time the Spokane Council of the Navy League has presented a memorial plaque to the ship receiving the award. Unlike in its earlier days, the trophy does not travel with the winning ship; it remains at the headquarters of the Commander of the Cruisers and Destroyers of the Pacific Fleet at San Diego.

In August, the memorial plaque and an Official Salutation from Mayor David Condon was presented to the USS LASSEN (DDG-82) as the most recent recipient of Spokane's storied award. ♦

Ted McGregor Sr. is a retired Navy Captain and President of the Spokane Council of the Navy League. Two of his sons publish this newspaper.