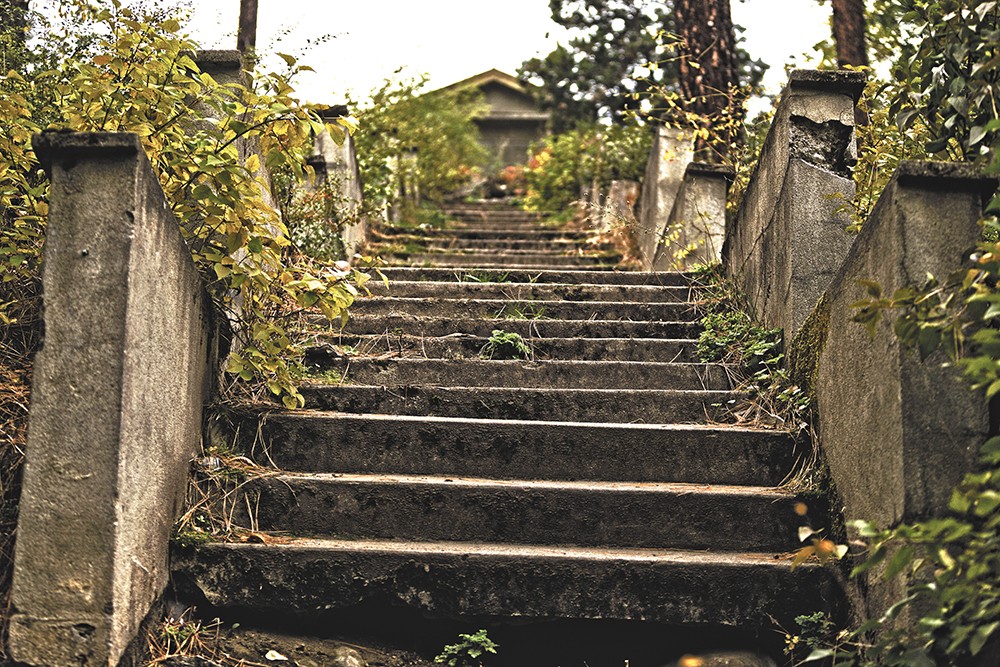 Young Kwak
The Thousand Steps memorial at the Greenwood Cemetery is one of Spokane's allegedly haunted spots.

Spokane is full of places with dark and unsavory pasts.

Behind the brick facades of 100-year-old downtown buildings that rose from the ground during the city's formative boom years at the turn of the 20th century, these chilling remnants of the past can still be found. You just have to dig deep enough.

On a recent crisp October night, around 50 Spokanites and a handful of curious visitors gather in a small back room of the historic Fox Theater. Bundled up in coats, scarves and gloves, they're preparing for a downtown walking tour to see and hear stories about the supposedly, or potentially, "haunted" sites scattered among the city's oldest blocks.

Some have already guessed that the first stop on the tour is the very building they're standing in. Purportedly, the Fox is one of several Spokane theaters to host a resident ghost, in this case named Otis. The Spokane Civic Theater, meanwhile, houses George the longtime ghost, and the Bing Crosby Theater is also said to keep a mischievous spirit or two in its wings. Like most other theaters, all three leave "ghost lights" on at all times the theater otherwise would be dark.

The evening's volunteer tour guide, local actress Rebecca Cook, reads from a binder of notes, playfully telling the crowd, with raised eyebrows and voice inflections, that during the Fox's complete restoration about six years ago, Otis was supposedly fond of messing with the construction workers by hiding tools and pulling other harmless poltergeist pranks.

These stories aren't unlike typically told tales of haunted spaces — doors opening and closing on their own, lights randomly flashing on and off. We always seem to latch onto unexplainable tales like these. Now, cable TV is host to a plethora of investigative-style paranormal shows, seeking to convince us that spirits of people and animals long gone still wander the places they once inhabited.

Taking advantage of this otherworldly obsession, many cities are increasingly becoming hosts to ghost tours, similar to the guided walk that departed from the Fox. Dubbed Spooky Spokane, the tour was the brainchild of Fox Theater board member Wendy Start after she stumbled across a little-known and -seen piece of Spokane's intriguing past a few years ago.

At the time, Start's son was getting ready to head off to college and she had gone shopping to find some furnishings for him at Dania, which occupies a nearly 100-year-old, four-story building on West Riverside Avenue. There, a salesperson led Start around the store, including down to the building's basement-level storage, where she was surprised to learn from the store employee that it had housed a speakeasy during the 1920s. There were hints of the space's past activities — elaborate tin panels adorning the ceiling and a faded desert mural of cactuses covering the walls.

"I was blown away by the space and never forgot it," Start says. "I thought something should be done so more people could see it."

That's when she began pulling up old Spokane Chronicle and Spokesman-Review archives, researching other mysterious happenings and colorful places around the city that have been long since forgotten.

Other than the forgotten speakeasy's illicit past, it became even more fitting that Start include the Dania building as one of Spooky Spokane's tour stops when she discovered the business' employees — and even past occupants of the building — had long reported unexplainable situations happening there, especially since a big renovation project started earlier this year.

Perhaps the construction work has recently disturbed the building's ghostly residents, who have not only been seen but heard by Dania employees like Bethany Hardesty, who stands firm in her assertion that years ago she saw a man dressed in early 20th century period clothing walk through the store and mysteriously disappear. She and store manager Patty Codd-O'Neill also report similar eerie accounts of hearing loud crashes and someone walking around the building's top floor — currently unused and vacant — when no one else is around. Both women say they've also seen strangely bright flashes of light zip by in dark corners of the store.

The weird stories don't end there. After the store is locked up overnight, perfectly made beds are sometimes found rumpled the next day.

"We'll come in in the morning and it looks like people have been jumping on the bed or sleeping in them, and the pillows are all moved around," Hardesty says.♦

For both book readers and participants in Caskey's ghost tours — for which the older man dons a Victorian Era costume, complete with top hat and bowtie — maybe the most intriguing location featured in the book is a chapter on the infamous Thousand Steps of Greenwood Cemetery. According to Caskey's research and past experience working as a historian for Spokane's largest community cemeteries, the plot of land at the top of the stairs leading up from Government Way was to directly access a burial section reserved for members of Spokane's Elks Lodge, founded in 1892. Without giving the story's surprises away, Caskey's theory is that the widely known hauntings of the steps and graves above them are by the unsettled spirits of founding and early Elks Lodge members, who became upset over the questionable decisions of their subsequent "benevolent brothers." ♦