Young Kwak photo
Nothing quite like a ball game in the summer.

BASKETBALL BY THE BEACH

If Hoopfest isn't enough to satisfy your summer hunger for basketball, the good people at the Coeur d'Alene Shootout are here to help. Three-on-three basketball takes over the North Idaho College campus the weekend of Aug. 24 and 25, which is conveniently located just a few blocks from the beach so cooling off after your game is a breeze. Registration is open until Aug. 19. Get more information at nicathletics.com.

Under most circumstances, the act of spitting is unacceptable and repulsive. But on Thursday, July 18, at the Harvest House, spitting — specifically spitting cherry pits — gets to shine. Try your hand, or rather your mouth, at beating the record spit of 49 feet, 4 inches. There's also a 4-mile run, for which the event gets its name, through the beautiful orchards of Green Bluff. Registration for the 41st annual Cherry Pickers Trot is $10 per person and open online at runsignup.com until July 17. The family friendly event also features live music and food, as well as a free "tot trot" for kids.

A TRIATHLON FOR KIDS

If you're getting worn down by the boundless energy of youth, and the absence of school to take it off your house, think about tiring your kids down with some good old physical exertion. The combination of swimming, biking and running in the Camp Dart-Lo Kids' Off-Road Triathlon on the evening of July 18 should do the trick. Register by July 10 and your kid will take home a T-shirt and medal for participating.

TAKE ME OUT TO THE BALLGAME

There are few things as quintessentially American as a summer's evening at a baseball game. Here in Spokane, we'll get 38 chances from June through September to take part in the seasonal tradition with our very own Spokane Indians. Every home game has a promotion or theme, from fireworks to Harry Potter, which means even non-sports fans can find something to enjoy. Plus, there's not a bad seat in the house at Avista Stadium and many tickets cost less than $10.

Spokane has a thing for massive community sporting events. We all know Bloomsday and Hoopfest, but Spike & Dig is right up there with them. It's one of the largest outdoor, six-on-six volleyball tournaments in the world with over 300 teams and 2,000 participants. Registration closes on July 24 and the coed tournament takes over the Dwight Merkel Sports Complex on the weekend of Aug. 3.

The automobile may have displaced the horse on city streets, but it didn't wipe this lawn game with over a century of history off the map. There are public horseshoe pits scattered around town at places like Grant and Minnehaha Parks. For a more private experience, purchasing a plastic set for your back yard works great. Or, if you want to get social with it, find the Spokane Horseshoe Pitchers Association on Facebook. The group gets together at the Franklin Park pits on Wednesday evenings. 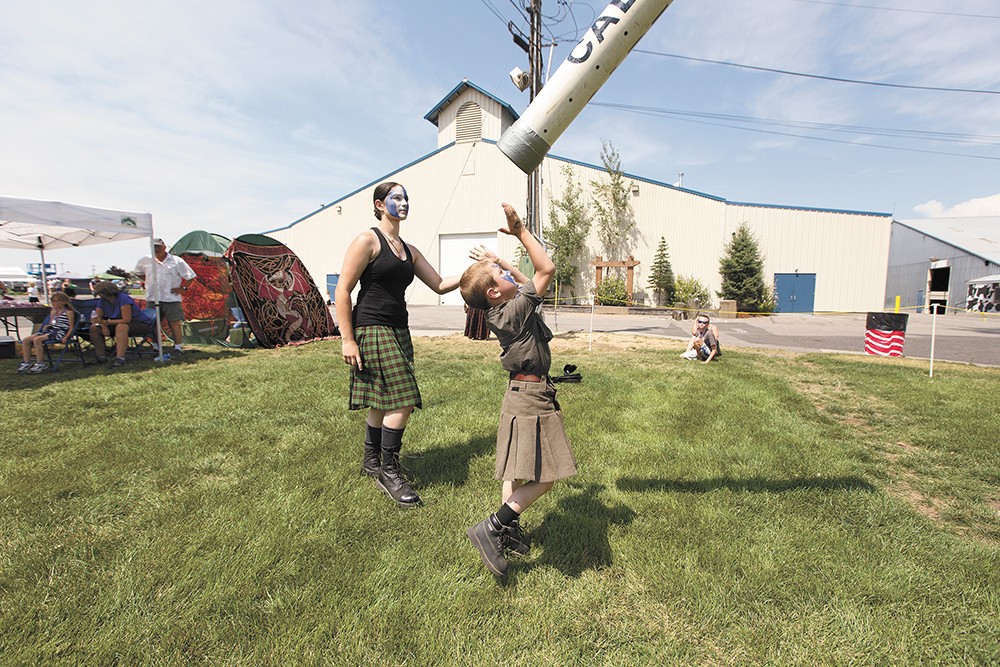 Scottish culture is complex and beautiful. Scottish sports? Not so much. In today's age of Moneyball-style sports, where analytics reign and fans are left to drown in a sea of statistics, it's pretty refreshing to get back to the roots of athletic competition every once in a while with the Spokane Scottish Highland Games. On Saturday, Aug. 3, at the county fairgrounds you can feast your eyes on old-school feats of strength: big people making big things move — tug of war, caber toss, hammer throw and more. Plus other demonstrations of Scottish culture with dance, music, food and storytelling. Tickets cost just $10 for adults.

Get together with your friends or co-workers and play some softball this summer. Spokane Parks and Recreation has weekly leagues for adults of all ages and skill levels that run from July through August. Registration is $750 per team and closes June 28. Learn more at spokanerec.org.

GET EXCITED FOR FALL WITH FOOTBALL

Whether you're a normal person who sees the end of summer as a sad moment in the inevitable march toward the long, dark winter or a crazy football fan who welcomes the change of seasons with open arms, the WSU Cougars are here to help ease you into September. On Saturday, Aug. 31, the Cougars host New Mexico State down in Pullman for their college football season opener. Coming of a 2018 season that saw the Cougars go 11-2 and finish the year ranked in the top 10 of the AP Poll, excitement is as high as ever on the Palouse. Make the trip down to Martin Stadium to see for yourself and send summer off on a high note.

GIVE FOOTGOLF A GO

There's something deeply satisfying about kicking the crap out of something and watching it go flying as far as it can. If you're watching the Women's World Cup this summer, where the USA are the heavy favorites to kick the crap out of both their opponents and the ball, you might get the itch to do some kicking of your own.

Allow me to suggest something that, unlike a game of soccer, won't kick back: FootGolf.

FootGolf takes the best aspects of both golf and soccer but leaves out the negative. Unlike golf, there are no exorbitant greens fees and expensive equipment required to play. And unlike soccer, which you certainly can't play alone and realistically need a sizable group to make something resembling a real game, FootGolf works great whether you're with friends or on your own.

The first organized and codified FootGolf tournament took place 10 years ago in the Netherlands. A few years later, the Federation for International FootGolf was founded and the game became a proper sport worthy of its two capital letters. Naturally, the FIFG is headquartered in England, a country with deep love for both golf and soccer. But the game has made its way across the pond in recent years.

The Eagle Ridge Short Course just off Highway 195 on Meadowlane Road is home to a nine-hole short course. The cost is $10 per person for adults, and an additional $3 if you need to rent a ball. With World Cup games kicking off in the morning to early afternoon, an evening at Eagle Ridge is the perfect way to cap off a kick-crazy summer day. ♦

The original print version of this article was headlined "SPORTS"