To the bleacher bum, the father and son and the recent grads looking for open road adventure; to the baseball fanatic, the stat junkie and the kid with dreams of playing under the lights at Seattle's Safeco Field: We've done it.

Below you'll find two loops for the perfect baseball road trips spanning four states and two countries. But you don't have to use our suggestions. All these stadiums are within striking distance of Spokane, so you can build your own trip.

Start at Spokane's own Avista Stadium (home of the Spokane Indians) and head northwest to Nat Bailey Stadium (Vancouver Canadians), one of Minor League Baseball's most historic parks. It's all downhill from there. Head south to Everett Memorial Stadium (Everett AquaSox) and continue to Cheney Stadium (Tacoma Rainiers). Next it's Oregon's Ron Tonkin Field (Hillsboro Hops), Volcanoes Stadium (Salem-Keizer Volcanoes) and PK Park (Eugene, Emeralds). Then back up to Washington for a game at Gesa Stadium (Tri-City Dust Devils) and back to Spokane. Total estimated drive time: 21.5 hours, according to Google Maps.

Here's another option: Start at Avista Stadium and head south to Gesa Stadium (Tri-City Dust Devils). Then down to Memorial Stadium (Boise Hawks) and over to Melaleuca Field (Idaho Falls Chukars). Next you're going up into Montana to Kindrick Legion Field (Helena Brewers), Centene Stadium (Great Falls Voyagers) and Ogren Park at Allegiance Field (Missoula Osprey). Then back to Spokane. Total estimated drive time: 22 hours, according to Google Maps.

Yes, we all know about Hoopfest (June 25 and 26), the biggest freakin' 3-on-3 basketball tournament in the world. But don't forget about its little cousin: Spokane Spike and Dig, a massive 6-on-6 co-ed volleyball tournament. The event at Dwight Merkel Sports Complex on July 30-31 typically draws more than 300 teams and accommodates all skill levels. You can register online at spikeanddig.com. Fees range from $190 to $220. The deadline to register is July 20.

If you hit it onto the roof, that's a double, unless the other team catches it. Then you're out. Over the fence is a home run, off the fence is a triple. First base is the birdbath. Second is the big bush behind the pitcher and third is the shed. The strike zone is marked with a lawn chair. Everybody's rules are a little different, but in my family there is hardly an event more quintessentially summer than a backyard Wiffle Ball game.

A couple of Spokane guys feel the same way. Darren Case and Dana Richardson were at a memorial horseshoe tournament for a friend several years ago, and between tosses (and sips of beer), the two decided to start a similar event, but with Wiffle Ball.

This year will be the seventh-annual Spokane Wiffle Ball Classic. Each year, the proceeds are donated to a different cause. This year's funds support the Bread Tie Challenge, a grassroots effort to eliminate the stigma of mental illness and suicide started by family and friends of a former Spokane Community College baseball player.

"We selfishly started it because we love Wiffle Ball, but then it turned into let's raise some money for some other people, and have some fun," Case says.

Here are their rules: The games last four innings, and each team gets two outs per inning. A walk takes you to second base, and every member of the team has to pitch once per game. Four players are on the field at one time, and the ball-in-hand rule is in effect, meaning if the pitcher has the ball before the runner makes it to first, it's an out.

The event typically draws between 12 and 15 teams, but Case says he'd like to see it grow.

"We'll make it as big as it can get," he says. "If we had more people, we could put on other events like a home run derby."

This year's tournament is Aug. 27 at Assumption Parish School. Sign up for the event online at spokanewiffleballclassic.com. Entry fee is $40-$50/person depending on the size of your team. Bonus: All-you-can-eat hot dogs, sausages and chips are provided. The beer and water is also unlimited. 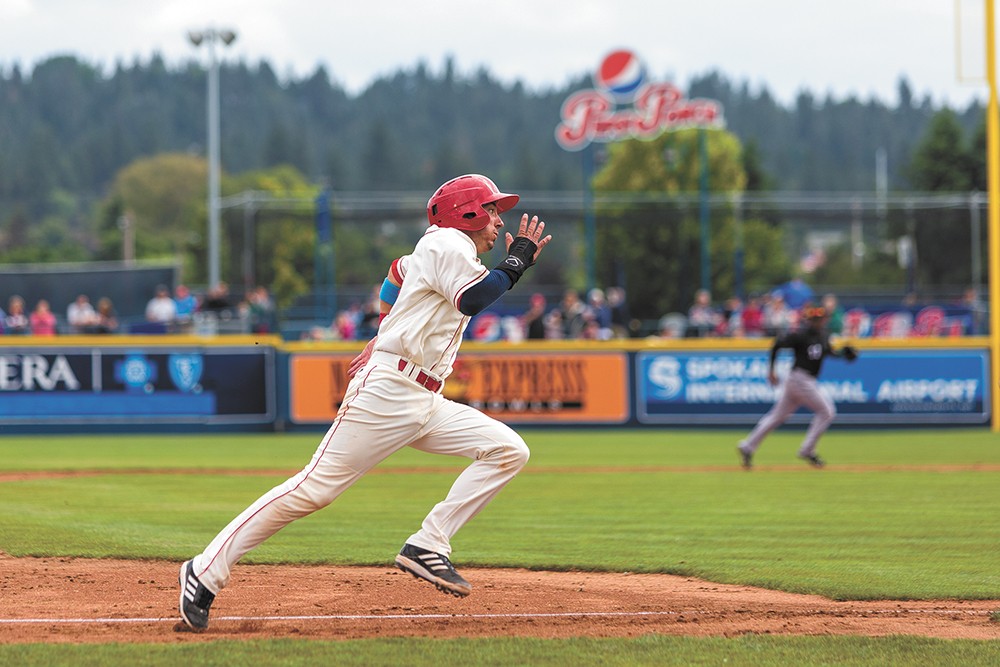 Summer is not complete without taking in a Spokane Indians game.

A nano bot virus went airborne and infected all the computer chips in the world. Cell phones, military equipment and combatant "robots" dressed in protective gear have taken over the world. Armed with a rifle and a pistol, it's up to you to find the antivirus and deliver it to, well, the Cabela's in Post Falls. Teams of up to five people navigate through shooting courses, obstacle courses and escape rooms. Weapons are loaded with non-lethal, plastic-tip rounds — the same ones used by law enforcement for training purposes. 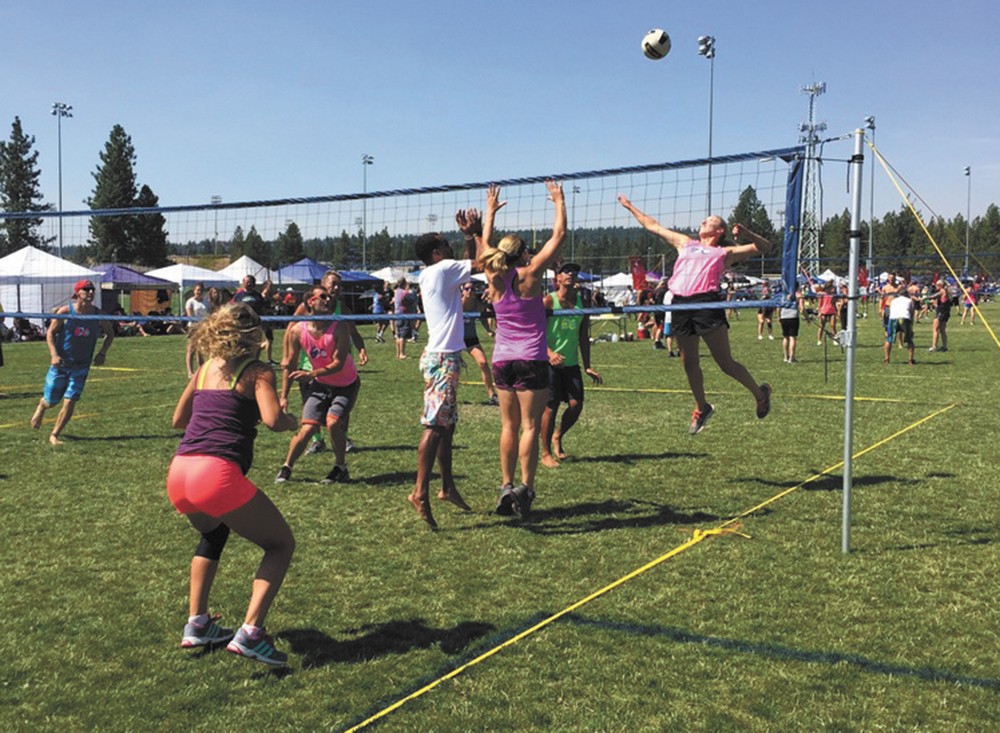 Register for Spike and Dig by July 20. 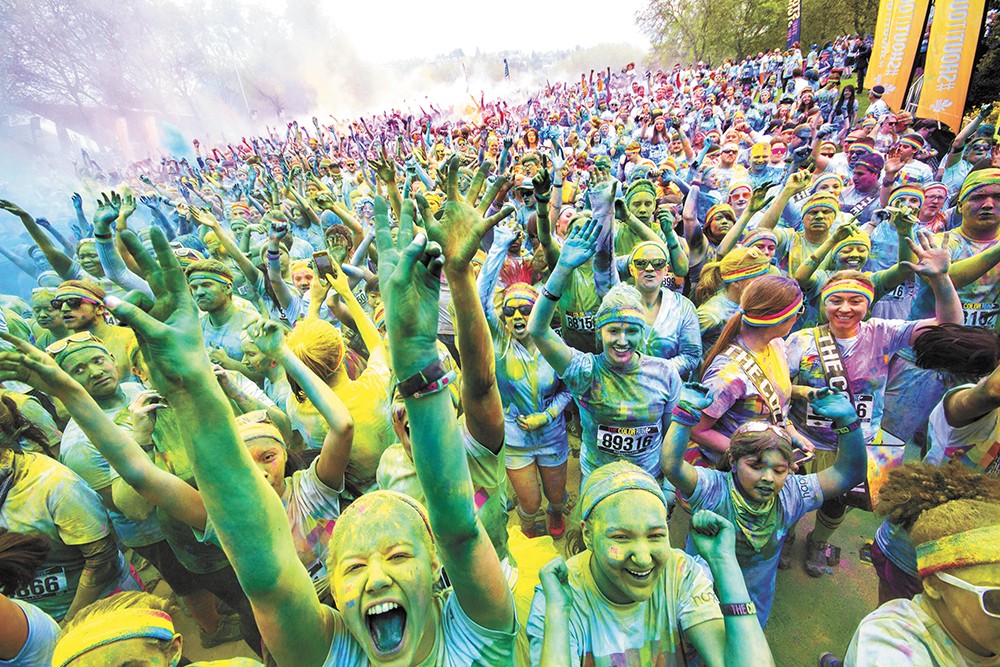 Run in color or the mud this summer.

The Dirty Dash: Let your inner 5-year-old rejoice. Slosh and slide through the muddiest 5K obstacle course around. The Dirty Dash at Riverside State Park features the "world's longest" Slip N Slide, giant mud pits, rope climbing walls and a foam-filled playpen known as the Bacon Bath. Registration ranges from $55 by June 25 to $70 the day of. Kids 12 and younger can do the mile-long Piglet Plunge.

Color in Motion 5K: You've seen the pictures on Facebook. The ones of your friends covered from head to toe in brightly colored chalk. They don't even look like they just ran three miles. Time to suck it up and register for this year's color run. Color in Motion 5K comes to Spokane Aug. 6 ($50), and Tacoma July 16.

Bubble RUN Spokane!: Who doesn't want to run through a three-mile bubble bath? Participants run, walk, dance and skip through five bogs of colored foam at each kilometer — enough to cover you from head to toe. If you can't make the Aug. 21 run in Spokane, consider a trip to Eugene (June 25), Portland (Aug. 13) or Seattle (Aug. 27). Registration is $50. ♦